Yield, Quality, Antioxidants and Elemental Composition of New Leek Cultivars under Organic or Conventional Systems in a Greenhouse
Previous Article in Special Issue

A Comparison between Organic and Conventional Olive Farming in Messenia, Greece

Listeria monocytogenes is a foodborne pathogen that is implicated in numerous outbreaks of disease (listeriosis) via fresh produce. The genetic features of L. monocytogenes that allow adherence and growth on produce remain largely uncharacterized. In this study, two non-motile transposon mutants were characterized for attachment, growth, and survival on the surface of cantaloupe rind. One of the mutants, L1E4, harbored a single transposon insertion in a DEAD-box RNA helicase gene (lmo0866 homolog), while the other, M1A5, harbored an insertion in a gene from a flagellum biosynthesis and chemotaxis gene cluster (lmo0694 homolog). When inoculated alone, neither mutant was significantly impaired in growth or survival on the surface of cantaloupe at either 25 or 37 °C. However, when co-inoculated with the wildtype parental strain, the RNA helicase mutant L1E4 had a clear competitive disadvantage, while the relative fitness of M1A5 was not noticeably impacted. Genetic complementation of L1E4 with the intact RNA helicase gene restored relative fitness on cantaloupe. The findings suggest that the DEAD-box RNA helicase encoded by the lmo0866 homolog is critical for relative fitness of L. monocytogenes on cantaloupe. Mutant L1E4 was pleiotropic, being not only non-motile but also cold-sensitive and with reduced hemolytic activity, warranting further studies to elucidate the role of this helicase in the competitive fitness of L. monocytogenes on produce. View Full-Text
Keywords: Listeria monocytogenes; competitive fitness; produce; RNA helicase Listeria monocytogenes; competitive fitness; produce; RNA helicase
►▼ Show Figures 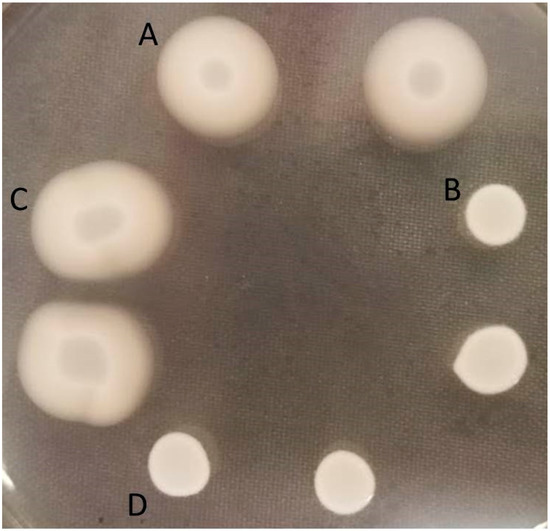