Growth Responses and Root Characteristics of Lettuce Grown in Aeroponics, Hydroponics, and Substrate Culture
Next Article in Special Issue

Trends in the Use of New-Media Marketing in U.S. Ornamental Horticulture Industries

High dependency on traditional primary agricultural commodities and recurrent world market price fluctuations had exposed Ethiopia to foreign earnings instability. To reduce the high dependence on primary agricultural commodities and the associated vulnerability of negative price declines, diversification of trade from primary agricultural commodities into high-value horticultural commodities has attracted the attention of policy makers. The developments made in this area have brought the sector to the position of fifth largest foreign revenue generator for the country. However, given the comparative advantage in marketing and the potential to achieve trade gains that the country possesses, the benefit from the horticultural sub-sector is far below its potential. In this regard, knowledge of the determinants of the industry’s development is very important. So far, no attempt was made to examine factors influencing the export performance of the sector, taking the long period performance of the sector into consideration. Consequently, this study was proposed to examine the factors that have influenced the horticultural export performance of Ethiopia for the period from 1985–2016. Secondary data collected from National Bank of Ethiopia, Ethiopia Horticulture Producer Exporter Association, Ministry of Agriculture of Ethiopia, FAOSTAT, UNCTAD, and the World Bank were used in this study. The short-run and long-run relationships among the series were investigated using the autoregressive-distributed lag (ARDL) bound test cointegration approach. The model result of the Error Correction Model (ECM (-1)) was revealed as negative and significant, whereby it confirmed the existence of cointegration among the series. Its coefficient value was 0.472, which showed 47% of the adjustment will be made in the first year and it will return to its long-run equilibrium after 2.12 years. The model results also showed that the real effective exchange rate, the real GDP of Ethiopia, foreign direct investment (FDI), prices, and the structural break had significantly influenced the horticultural export performance both in the short-run and the long-run. Foreign GDP and real interest rates were revealed significant only in the long-run. Finally, important policy measures deemed to improve the horticultural export performance of Ethiopia were recommended. View Full-Text
Keywords: horticulture; export performance; ARDL bound test cointegration; Ethiopia horticulture; export performance; ARDL bound test cointegration; Ethiopia
►▼ Show Figures 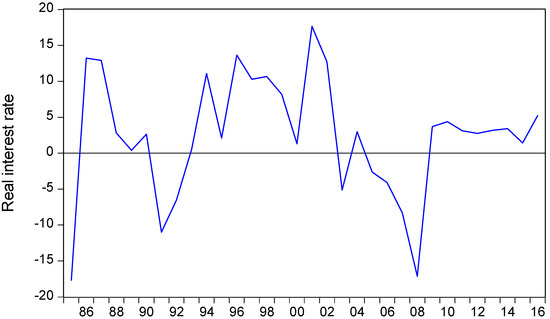