The Influence of Non-Saccharomyces Species on Wine Fermentation Quality Parameters

Two major spoilage yeasts in the wine industry, Brettanomyces bruxellensis and Zygosaccharomyces rouxii, produce off-flavors and gas, causing considerable economic losses. Traditionally, SO2 has been used in winemaking to prevent spoilage, but strict regulations are in place regarding its use due to its toxic and allergenic effects. To reduce its usage researchers have been searching for alternative techniques. One alternative is biocontrol, which can be used either independently or in a complementary way to chemical control (SO2). The present study analyzed 122 native non-Saccharomyces yeasts for their biocontrol activity and their ability to be employed under fermentation conditions, as well as certain enological traits. After the native non-Saccharomyces yeasts were assayed for their biocontrol activity, 10 biocontroller yeasts were selected and assayed for their ability to prevail in the fermentation medium, as well as with respect to their corresponding positive/negative contribution to the wine. Two yeasts that satisfy these characteristics were Wickerhamomyces anomalus BWa156 and Metschnikowia pulcherrima BMp29, which were selected for further research in application to mixed fermentations. View Full-Text
Keywords: biocontrol application; non-Saccharomyces screening; SO2 reduction biocontrol application; non-Saccharomyces screening; SO2 reduction
►▼ Show Figures 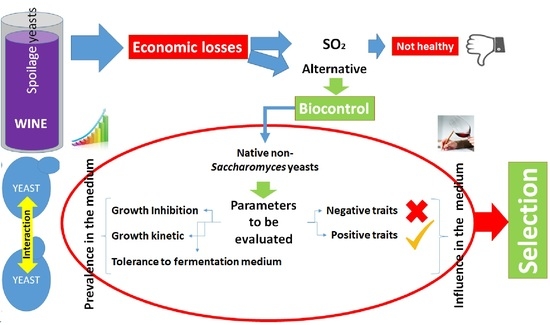