Yeast Life Span and its Impact on Food Fermentations

Under anaerobic/hypoxic conditions, Saccharomyces cerevisiae relies on external lipid supplements to modulate membrane lipid fraction in response to different stresses. Here, transcriptomic responses of two S. cerevisiae wine strains were evaluated during hypoxic fermentation of a synthetic must with/without ergosterol and oleic acid supplementation. In the absence of lipids, the two strains, namely EC1118 and M25, showed different behaviour, with M25 significantly decreasing its fermentation rate from the 72 h after inoculum. At this time point, the whole genome transcriptomic analysis revealed common and strain-specific responses to the lack of lipid supplementation. Common responses included the upregulation of the genes involved in ergosterol biosynthesis, as well as the seripauperin and the heat shock protein multigene families. In addition, the upregulation of the aerobic isoforms of genes involved in mitochondrial electron transport is compatible with the previously observed accumulation of reactive oxygen species in the two strains during growth in absence of lipids. Considering the strain-specific responses, M25 downregulated the transcription of genes involved in glucose transport, methionine biosynthesis and of those encoding mannoproteins required for adaptation to low temperatures and hypoxia. The identification of these pathways, which are presumably involved in yeast resistance to stresses, will assist industrial strain selection. View Full-Text
Keywords: wine fermentation; ergosterol; oxidative stress; TIR/TIP; methionine biosynthesis wine fermentation; ergosterol; oxidative stress; TIR/TIP; methionine biosynthesis
►▼ Show Figures 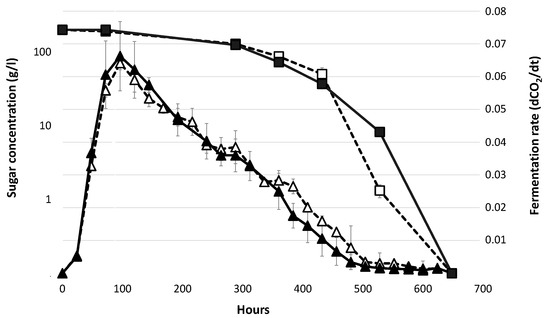