Feline oral squamous cell carcinoma (OSCC) is a highly invasive form of cancer in cats. In human OSCC, cluster of differentiation 147 (CD147) contributes to inflammation and tumor invasiveness. CD147 is a potential therapeutic target, but the expression of CD147 in feline OSCC has not been examined. Immunohistochemistry was used to determine if cyclooxygenase 2 (COX-2) and CD147 expression in feline OSCC biopsies was coordinated. Tumor cells were more likely to express COX-2 (22/43 cases or 51%) compared to stroma (8/43 or 19%) and adjacent oral epithelium (9/31 cases or 29%) (p < 0.05). CD147 was also more likely to occur in tumor cells compared to stroma and adjacent mucosa, with 21/43 (49%) of cases having >50% tumor cells with mild or moderate CD147 expression, compared to 9/28 (32%) in adjacent epithelium and only 5/43 (12%) in adjacent stroma (p < 0.05). In feline OSCC cell lines (SCCF1, SCCF2, and SCCF3), CD147 gene expression was more consistently expressed compared to COX-2, which was 60-fold higher in SCCF2 cells compared to SCCF1 cells (p < 0.05). CD147 expression did not correlate with COX-2 expression and prostaglandin E2 (PGE2) secretion, indicating that they may be independently regulated. CD147 potentially represents a novel therapeutic target for the treatment of feline OSCC and further study of CD147 is warranted. View Full-Text
Keywords: feline; oral squamous cell carcinoma; CD147; EMMPRIN; Basigin; COX-1; COX-2; PGE2; inflammation; invasion feline; oral squamous cell carcinoma; CD147; EMMPRIN; Basigin; COX-1; COX-2; PGE2; inflammation; invasion
►▼ Show Figures 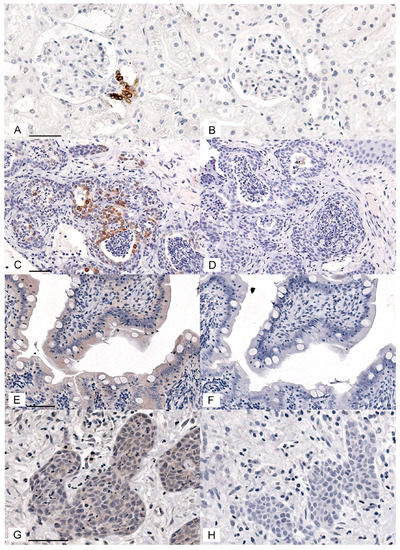