Occurrence of Ochratoxin A in Coffee: Threads and Solutions—A Mini-Review

Caffeine Consumption through Coffee: Content in the Beverage, Metabolism, Health Benefits and Risks

Caffeine (1,3,7-trimethylxanthine) is the most consumed psychoactive substance in the world, acting by means of antagonism to adenosine receptors, mainly A1 and A2A. Coffee is the main natural source of the alkaloid which is quite soluble and well extracted during the brew’s preparation. After consumption, caffeine is almost completely absorbed and extensively metabolized in the liver by phase I (cytochrome P450) enzymes, mainly CYP1A2, which appears to be polymorphically distributed in human populations. Paraxanthine is the major caffeine metabolite in plasma, while methylated xanthines and methyluric acids are the main metabolites excreted in urine. In addition to stimulating the central nervous system, caffeine exerts positive effects in the body, often in association with other substances, contributing to prevention of several chronic diseases. The potential adverse effects of caffeine have also been extensively studied in animal species and in humans. These aspects will be approached in the present review. View Full-Text
Keywords: caffeine; coffee; consumption; metabolism; health benefits; potential adverse effects caffeine; coffee; consumption; metabolism; health benefits; potential adverse effects
►▼ Show Figures 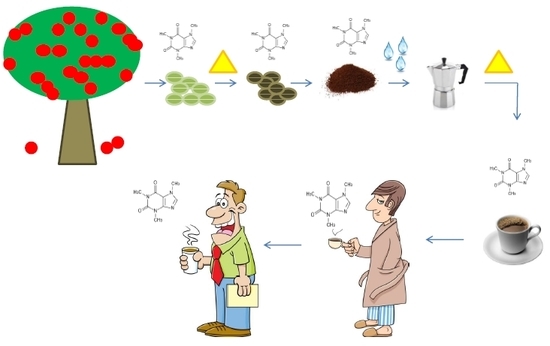