Cadmium (Cd) is an environmental pollutant known to cause dysfunctions of the tubular reabsorption of biomolecules in the kidney. Elevated levels of urinary excretion of low-molecular-weight proteins such as β2-microglobulin (β2-MG) have been used as an indicator of Cd-induced renal tubular dysfunctions. However, very few studies have examined the direct effects of Cd on the reabsorption efficiency of proteins using cultured renal cells. Here, we developed an in vitro assay system for quantifying the endocytic uptakes of fluorescent-labeled proteins by flow cytometry in S1 and S2 cells derived from mouse kidney proximal tubules. Endocytic uptakes of fluorescent-labeled albumin, transferrin, β2-MG, and metallothionein into S1 cells were confirmed by fluorescence imaging and flow cytometry. The exposure of S1 and S2 cells to Cd at 1 and 3 µM for 3 days resulted in significant decreases in the uptakes of β2-MG and metallothionein but not in those of albumin or transferrin. These results suggest that Cd affects the tubular reabsorption of low-molecular-weight proteins even at nonlethal concentrations. The in vitro assay system developed in this study to evaluate the endocytic uptakes of proteins may serve as a useful tool for detecting toxicants that cause renal tubular dysfunctions. View Full-Text
Keywords: kidney; endocytosis; β2-microglobulin; metallothionein; flow cytometry; proximal tubule epithelial cells kidney; endocytosis; β2-microglobulin; metallothionein; flow cytometry; proximal tubule epithelial cells
►▼ Show Figures 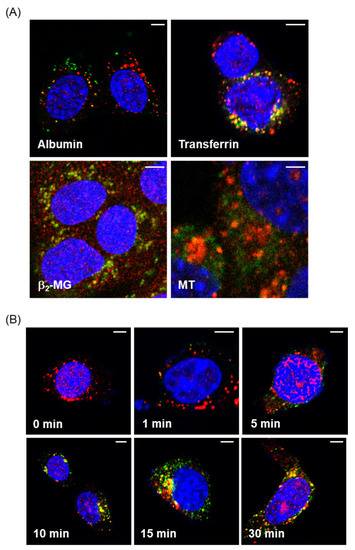