Roasted Rye as a Coffee Substitute: Methods for Reducing Acrylamide
Next Article in Special Issue

Volatile Composition and Sensory Attributes of Smoothies Based on Pomegranate Juice and Mediterranean Fruit Purées (Fig, Jujube and Quince)

To increase the intake of fruits and vegetables—especially among young people—the food industry is trying to develop new, easy-to-eat and long-shelf-life products, such as smoothies. Nowadays, consumers are choosing their foods based not only on nutritional/functional properties (content of polyphenols, vitamins, minerals, among others), but also on sensory attributes. The aim of this study was to investigate the volatile composition by HS-SPME and the sensory profile by descriptive sensory analysis of novel smoothies prepared by blending fig, jujube or quince purée with pomegranate juices (cv. Mollar de Elche or Wonderful) at two ratios purée:juice (40:60 or 60:40). Twenty-three volatile compounds were identified by GC-MS and classified as alcohols, aldehydes, esters, furans, ketones, terpenes and terpenoids. Among volatile compounds, the five predominant ones in the studied smoothies were: (i) 5-HMF (30.6%); (ii) 3-hexen-1-ol (9.87%); (iii) hexanal (9.43%); (iv) 1-hexanol (8.54%); and (v) 3-octanone (7.67%). Fig smoothies were sweet and had flavor and volatiles related to fig, pomegranate, and grape. While jujube products were bitter and had jujube and pear notes. Finally, quince smoothies were consistent, sour and had quince, apple and floral notes. Thus, the type of fruit purée used clearly determined the flavor of the final product. The smoothies prepared with Mollar de Elche pomegranate juice were characterized by having high intensity of pear odor/aroma and consistency, and the Wonderful smoothies were characterized by lower consistency and more intense pomegranate aroma and sourness. View Full-Text
Keywords: Punica granatum; Ficus carica; Ziziphus jujuba; Cydonia oblonga; descriptive sensory analysis; volatile profile Punica granatum; Ficus carica; Ziziphus jujuba; Cydonia oblonga; descriptive sensory analysis; volatile profile
►▼ Show Figures 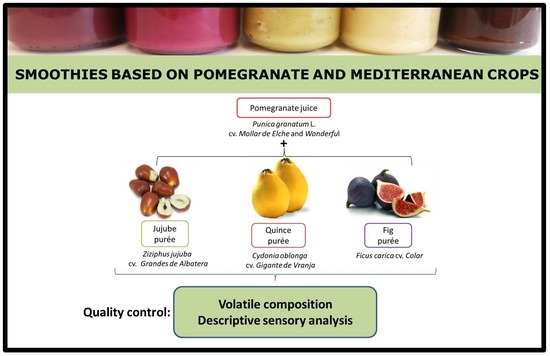