The purpose of this study was to compare the nutritional components and antioxidant activities of two different cultivars of Brassica juncea (Dolsan, Yeosu, Korea (BJD) and (Jeongseon, Gangwon, Korea (BJJ)). We investigated the proximate composition (moisture, crude ash, crude protein and crude lipid), antioxidant activities (2,2-Diphenyl-2-picrylhydrazil (DPPH) scavenging activity and ferric reducing antioxidant power (FRAP)), total phenol content, total flavonoid content and sinigrin content by high-performance liquid chromatography analysis. Our results show that the proximate compositions of BJD and BJJ were not significantly different. However, both the DPPH radical scavenging and FRAP activities of the BJJ extracts were higher than those of the BJD extracts. The total phenol contents of the BJD and BJJ extracts were 6.56 and 9.80 mg gallic acid equivalent/g, respectively. The total flavonoids content of the BJD and BJJ extracts were 20.92 and 34.81 mg rutin equivalent/g, respectively, whereas the sinigrin contents, one of the major compounds in BJD and BJJ extracts, were 16.16 mg/g and 11.73 mg/g, respectively. In this study, we confirmed that, by comparing BJJ and BJD, the sinigrin content of BJD was higher than that of BJJ, but the antioxidant activity and phenol content of BJD were superior to that of BJJ. View Full-Text
Keywords: Brassica juncea; antioxidant; nutritional components; comparative analysis; different cultivars Brassica juncea; antioxidant; nutritional components; comparative analysis; different cultivars
►▼ Show Figures 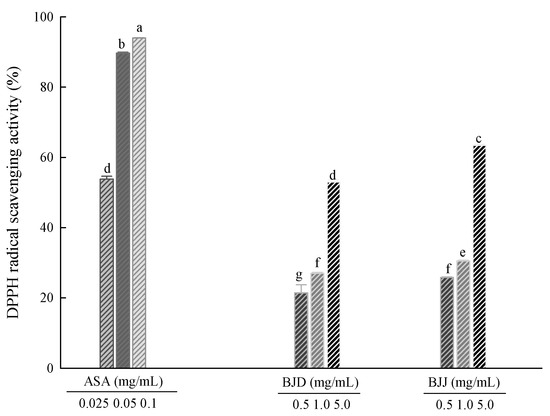