ELISA and Chemiluminescent Enzyme Immunoassay for Sensitive and Specific Determination of Lead (II) in Water, Food and Feed Samples
Next Article in Special Issue

Does Fermentation Really Increase the Phenolic Content in Cereals? A Study on Millet
Previous Article in Special Issue

Antiradical Activity of Hydrolysates and Extracts from Mollusk A. broughtonii and Practical Application to the Stabilization of Lipids

The study of free-radical oxidation processes is important today due to their proven influence on various metabolic processes of the human body [1,2,3]. The accumulation of free radicals causes lipid peroxidation and dysfunction of the cell membrane, which leads to premature aging of the body, frequent sickness and even malignant tumors [4,5,6]. A quantitative study of the antiradical properties of given substances can suggest the ways in which such substances with antiradical activity are applied in practice. However, up till now, the focus of studies on antiradical activity has been mainly oriented towards vegetable raw materials—essential oils and mixtures thereof, and extracts of medicinal and other plants [7,8,9]. At the same time, raw materials of animal—including marine—origin, and products (of animal/marine origin) that have been subjected to technological and biotechnological modification could also have antioxidants. The biological and pharmacological activities of organic natural compounds of marine origin have been demonstrated by numerous studies [10,11,12,13].
Nowadays, many species of marine organisms that are used for food purposes, in traditional and non-traditional medicine, were also shown to have antioxidant activity and as raw materials for obtaining biologically active additives. Amongst marine hydrobionts, bivalve mollusks are promising sources of biologically active substances with antiradical properties. Substances from bivalves exhibit high antioxidant capacity: Extracts from Crassula aequilatera, Mactra murchisoni, and Paphies donacina, which were reported to scavenge 2,2-diphenyl-1-picrylhydrazyl (DPPH) radicals [14]; Paphia malabarica extracts, which were evaluated in relation to DPPH and ABTS+ radical [15] crude extracts and fractions of alcohol extracts from Mactra veneriformis [16]; and oligopeptides from Meretrix meretrix [17].
The clams Anadara broughtonii, Spisula sachalinensis, Mactra chinensis, and others can be found in the coastal zone of the Sea of Japan [18]. The tissues of bivalve mollusks are rich in amino acids and specific carbohydrates [19,20,21,22,23,24,25]. A. broughtonii belongs to the family Arcidae and is a rather common type of Mollusca, in the Bivalvia class. It is found in the upper-sublittoral in subtropical areas of the Asian Pacific, with commercial stocks at depths of 2–15 m. The maximum lifespan of A. broughtonii is 65 years; the total mass of individuals varies from 80 to 380 g, and the shell length is 65–80 mm. A. broughtonii inhabits muddy and sandy bottoms, burrowing to depths of 10–25 cm. It is found in the Yellow Sea and the Sea of Japan [26].
Acid and enzymatic hydrolysates and hydrothermal extracts are products of technological and biotechnological processing of bivalve mollusks. They are sources of biologically active substances with potential health benefits [27,28].
Their antioxidant properties may be the basis for use as ingredients in lipid-containing emulsion products in order to reduce the rate of oxidation of lipids. Nowadays, various synthetic substances that perform the function of antioxidants are used for lipid stabilization of vegetable oils—potassium diethyl dithiophosphate or 2,4,6-tris-(dimethylamino) phenol or antioxidant mixtures containing BHT, naphthols, propyl gallates, and others. The disadvantages of these stabilizers are that they are not devoid of toxic properties [29]. Natural antioxidants are safer at stabilizing the quality of lipid rich foods [30].
The purpose of the present study was to investigate the antiradical properties of acid and enzymatic hydrolysates and hydrothermal extracts of the soft tissues of the bivalve mollusk A. broughtonii and to determine their effect on the oxidation of lipids in mayonnaise.

2.1. Material from the Bivalve Mollusk A. broughtonii

The clam A. broughtonii ranges from 65 to 80 mm in length, and its mass varies from 80 to 200 g. Molluscs were collected in June, September, and November 2016, and in February and April 2017 from Amur Bay (43060 N and 131440 E), Sea of Japan, in the Primorsky region in Russia (all analyses were done using pooled mollusks—seasonal changes were not taken into consideration in this study). The mollusks from all the sampling months were pooled to one sample of 5 kg. Live bivalve mollusks were transported under refrigeration (+6 °C) to the laboratory within 3 h and sampled randomly for this study. Upon arrival, the clams were manually shucked by cutting the adductor muscle with a knife. The clam juice was removed and the edible portion, constituting 12.46%–14.08% of the total weight of A. broughtonii, was collected. The edible portion was then dissected into 4 parts: Muscle, mantle, adductor, and viscera. Muscle and mantle were powdered using a blender (Phillips, Guangzhou, China) in the presence of liquid nitrogen. The samples were packed in a polyethylene bag, sealed and stored at −20 °C until use. The storage time was no longer than 1 month.

2.2. Acid and Enzymatic Hydrolysis and Hydrothermal Extraction and Analysis

For fractionation of melanoidins, we used the method of gel-chromatography on columns with TSK-gels Toyopearl HW-40 and HW-50 (“Toyo Soda”, Japan), pre-calibrated for proteins with well-known molecular weights. The gels that were used had the following ranges for separation of molecular masses for proteins: The separation of proteins with molecular masses from 100 to 10,000 Da takes place on HW-40; and on HW-50 for proteins from 500 to 80,000 Da. A 0.2 M solution of sodium chloride and distilled water was used as eluent. Samples hydrolysates and hydrothermal extracts were applied on the column (1.2 × 35 cm, free volume 12 mL) in 0.4 mL pre-skim chloroform.
The optical density of fractions of volume 1 mL was measured using a scanning spectrophotometer UV-1800 (Shimadzu, Japan) at 400 and 420 nm wavelengths. Calculation of the melanoidins content was carried out according to formulas derived on the basis of the standard curve [32].

Antiradical properties were evaluated in terms of ability to interact with the stable free radical 2,2-diphenyl-1-picrylhydrazyl (DPPH) in vitro. Determination was carried out in a reaction mixture containing 3 mL of 0.3 mM DPPH in ethanol, 1 mL 50 mM tris -HCl- buffer, pH 7.4, and 1 mL of extract or hydrolysate [33]. After 30 min incubation at a temperature of 20 °C, values of optical density were recorded at λ = 517 nm. The experiments were performed on a scanning spectrophotometer UV 1800 (Shimadzu, Japan) in cuvettes (l = 1 cm) at T = 298 °K
The activity was characterized by the following indicators:

Antiradical properties were compared with the effect of the well-known synthetic antioxidant BHT (2,6-ditretbutyl-4-methyl-phenol), which was previously purified by recrystallization from ethanol, and then the isolated crystals were dried and sublimed in a vacuum.

The acid and peroxide values (AV, PV) in the oil samples, in the oil samples extracted from mayonnaise with a mixture of solvents (ethyl ether and chloroform) were determined according to the methods stipulated in ISO [34,35]. The peroxide values were measured spectrophotometrically at 500 nm by a UV–1800 instrument (Shimadzu, Japan). Results were expressed in mmol of oxygen per kilogram of oil. Acid value (AV) is an important indicator of vegetable oil quality. AV is expressed as the amount of KOH (in milligrams) necessary to neutralize free fatty acids contained in 1 g of oil.

Results were expressed as mean values (standard deviation) (n = 9). In total, three acid hydrolysates, three enzymatic hydrolysates, and three hydrothermal extracts were obtained. Data were subjected to analysis of variance (ANOVA), and mean comparisons were carried out using the Duncan’s multiple range test (hydrolysates and hydrothermal extracts) and t-test (samples of mayonnaise with or without additives). Statistical analysis was performed using the statistical Package for Social Sciences (SPSS for windows: SPSS Inc., Chicago, IL, USA). Results with p < 0.05 were considered to be statistically significant.

The hydrolysates and hydrothermal extracts of the bivalve mollusk A. broughtonii possess antiradical activity, the level of manifestation of which depends on the method of biotechnological and technological processing. Assessment of antiradical activity using the DPPH radical showed that acid hydrolysates have the maximum antiradical properties, probably due to the higher content of low molecular fractions of melanoidins.
Acid and enzymatic hydrolysates, and hydrothermal extracts in the mayonnaise composition slow down the processes of lipid oxidation and hydrolysis of triglycerides. Acid hydrolysates play the most significant role in reducing the speed of oxidation and hydrolysis. The results of this study can be practically applied in the production of mayonnaise and fat-containing sauces. However, the hydrolysates and extracts were not able to prevent the formation of peroxides as is the case for EDTA, which is a much better antioxidant in mayonnaise than BHT. Moreover, peroxides do not have any effect on off-flavors. To make a more complete evaluation of the effect of the hydrolysates and extracts determination of secondary lipid oxidation products such as aldehydes and ketones is necessary and preferably sensory analysis should also be done. 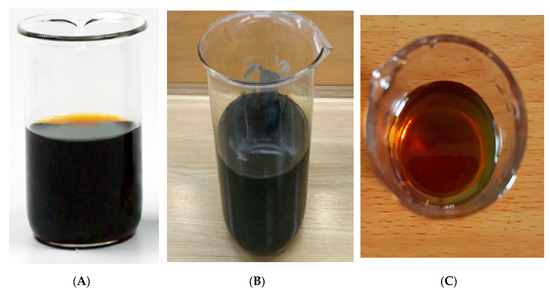 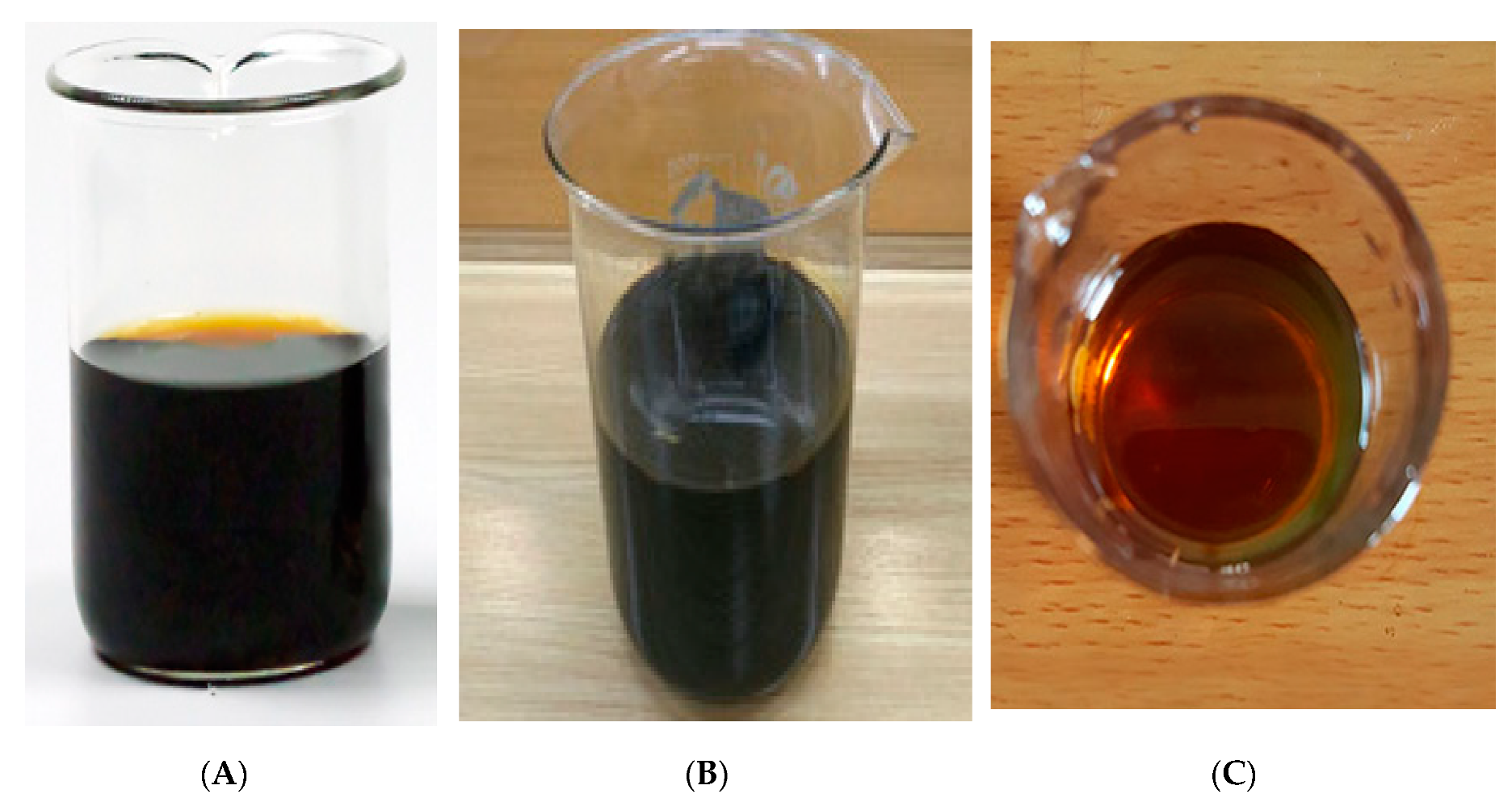 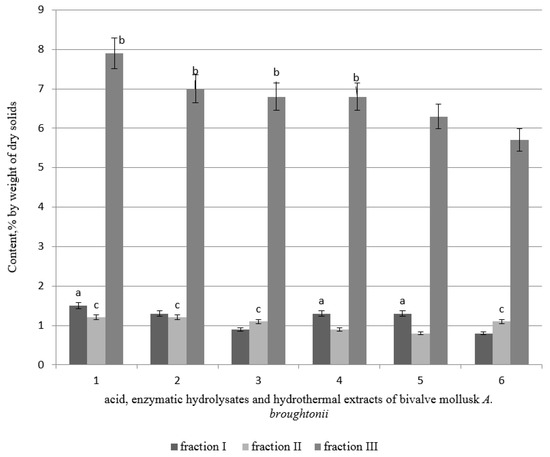 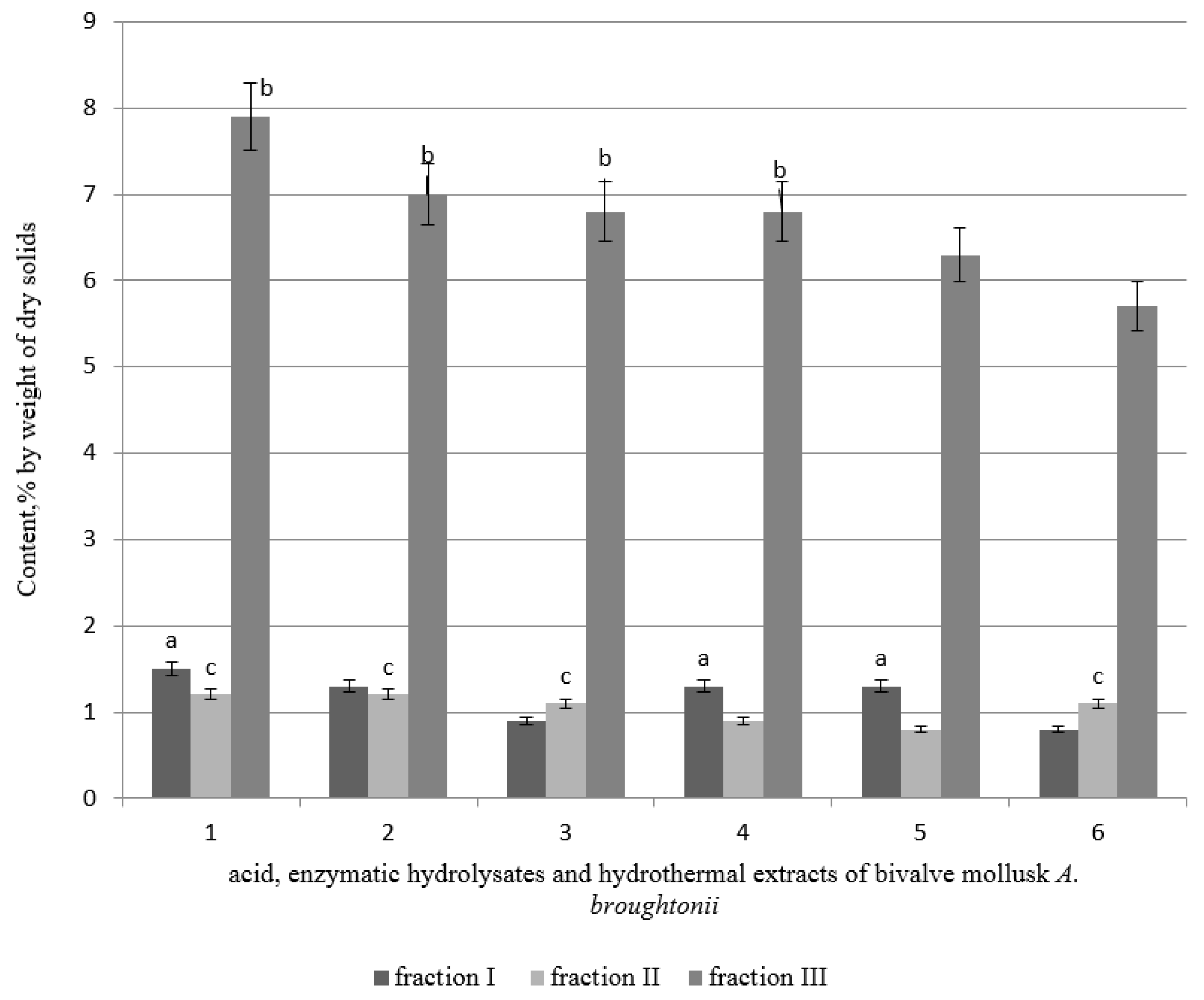 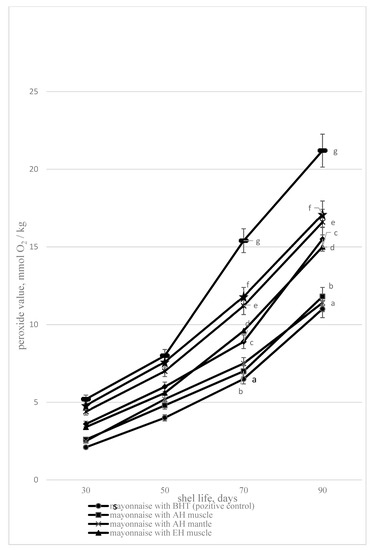 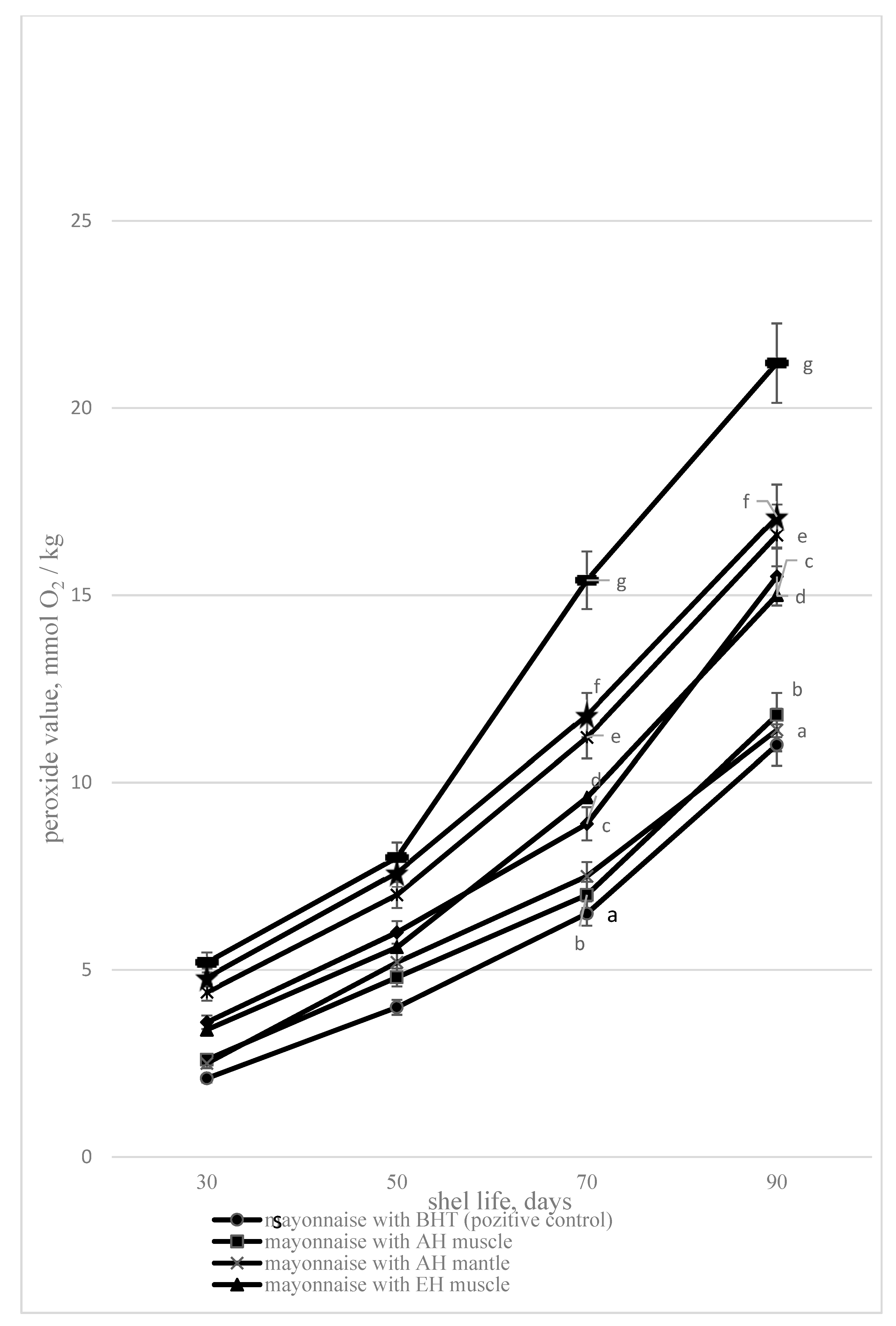 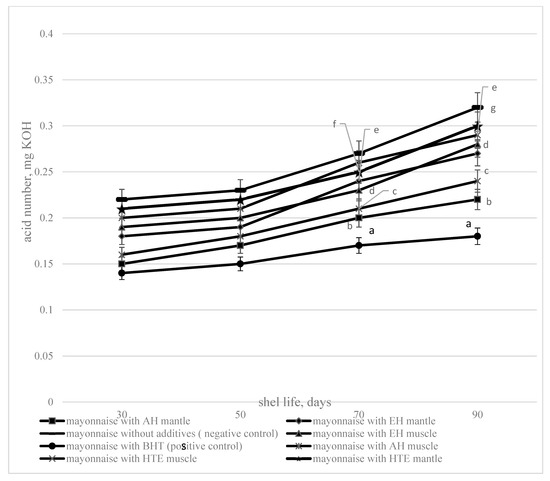 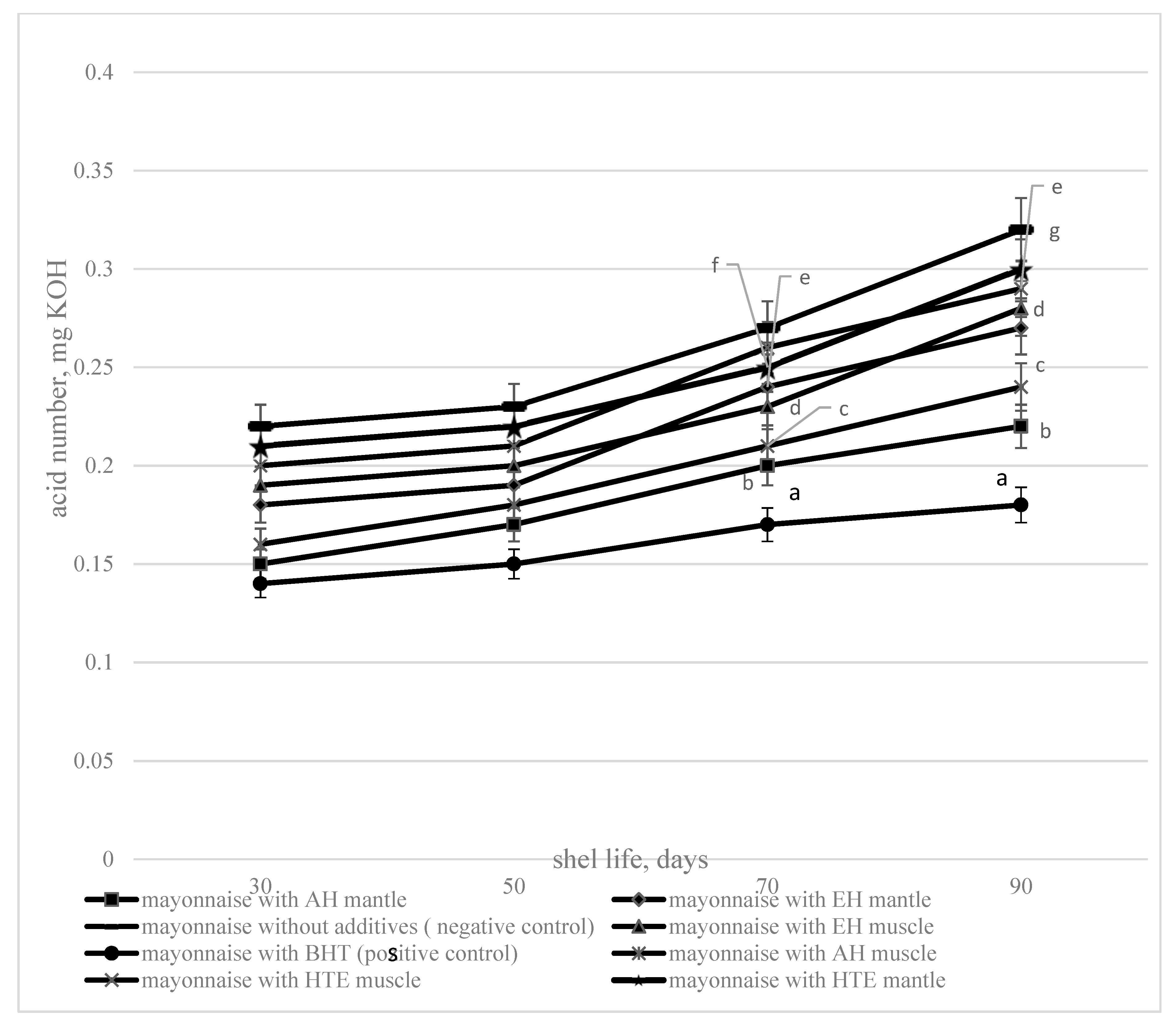