Evaluation of Malolactic Bacteria Associated with Wines from Albariño Variety as Potential Starters: Screening for Quality and Safety

The biodiversity of lactic acid bacteria in musts and wines of Albariño variety has been studied. The identification of species was addressed through a combination of biochemical and genetic methods (API® 50 CHL test, 16S rDNA and recA gene sequences, Amplified Ribosomal DNA Restriction Analysis -ARDRA- and 16S-26S intergenic region analysis). The results grouped the isolates into six species predominating those of the genus Lactobacillus and showing a typical biogeographical distribution. Among sixteen strains evaluated, eight of them showed malolactic activity. The study of the presence of genes hdc, odc, and tdc, along with the LC/MS-MS analysis of biogenic amines in wine, showed five strains lacking aminogenic ability. The absence of the pad gene in the above-mentioned strains discards its ability to produce volatile phenols that may adversely affect the aroma. Finally, all malolactic strains showed β-glucosidase activity so that they could contribute to enhance and differentiate the aromatic profile of Albariño wines. View Full-Text
Keywords: lactic acid bacteria; wine; malolactic fermentation; selected strains lactic acid bacteria; wine; malolactic fermentation; selected strains
►▼ Show Figures 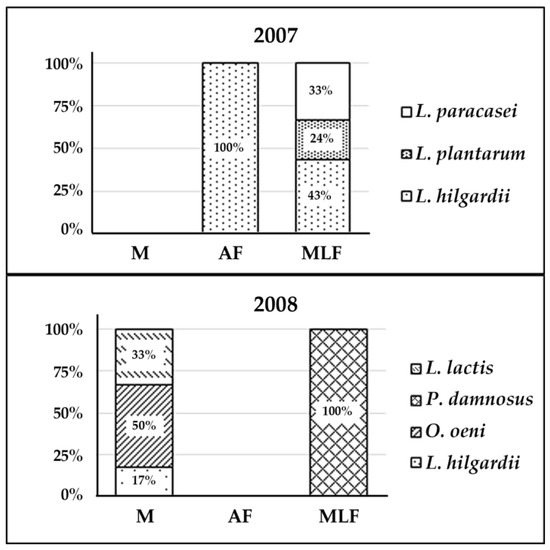