The shelf-life extension implicates the reduction of food waste. Plant polyphenols can have a crucial role in the shelf-life extension of foods. Olive leaf extract (OLE) is rich in phenolic compounds such as oleuropein, which is well-known for its antioxidant properties. Physico-chemical, microbiological and sensory aspects of non-thermally stabilized olive-based pâté fortified with OLE at concentrations of 0.5 (EX0.5) and 1 mg kg−1 (EX1) were investigated. These samples were compared with olive-based pâté fortified with the synthetic antioxidant BHT (butylated hydroxytoluene) and with a control sample (CTR) without antioxidants. No sensory defects were perceived in all samples, even if a more intense typical olive flavour was perceived in samples containing OLE compared to those containing BHT and CTR. This result was confirmed by significantly higher levels of 2-methylbutanal and 3-methylbutanal in samples containing OLE compared to CTR and BHT. Moreover, the main microbial groups registered a significant loss of 0.5–1 logarithmic cycles in samples containing OLE, especially in EX1. The results of the present study indicate the potentiality of using OLE as natural preservatives in non-thermally stabilized olive-based pâté, since some spoilage-related microbial groups were negatively affected by the addition of OLE at the highest concentration. View Full-Text
Keywords: olive leaves; waste; bioactive compounds; shelf-life; antimicrobial properties; acceptability olive leaves; waste; bioactive compounds; shelf-life; antimicrobial properties; acceptability
►▼ Show Figures 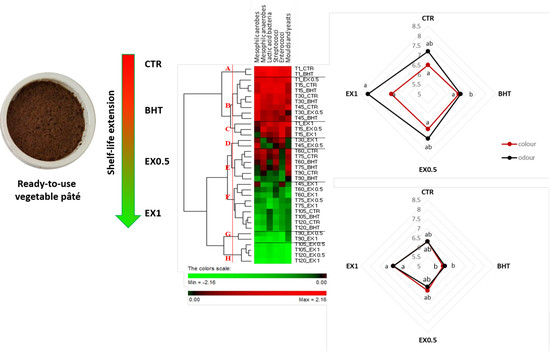