Four packaging conditions were considered in these experiments, and the components are exemplified in Table 1. The temperature of these tests was set at 4 °C and the relative humidity was 90%. The air group was used as a controlled trial, and the other three groups were set with different ratios of O2 and CO2 in the atmosphere space to do the experiments.
Before closing the fresh-keeping bags, which contained the T. matsutake filled with the mix standard gases, we needed to draw the air out of the bags and seal up these bags by a vacuum packaging machine (Deli, Ningbo, Zhejiang, China). A small hole was cut in the corner of each bag, which could only accommodate a gas supply pipe about 8 mm wide. Mixed standard gases bought from a standard gas factory in local (Linzhi, Tibet), were used to fill the fresh-keeping bags. T. matsutake with different modified atmosphere packaging are shown in Figure 1.

In this paper, the data of sensory indicators and physical and chemical indicators of four groups of T. matsutake were obtained. Sensory indicators included the hardness (cap, stipe), color, and odor. Physical and chemical indicators included pH, soluble solids content, and moisture content. We measured the quality indicators of T. matsutake once every two days. Each time we took 2 pieces and tested them separately, and each indicator was measured three times for the mean value.
Sensory evaluation included the hardness (cap, stipe), color, and odor of fresh Tibetan T. matsutake. A trained assessment team panel, including the local gatherer, acquirer, cook, and 2 consumers all of these 5 people who were invited to make the sensory evaluation, observed and filled a form to record the scores separately. In this study, the score of sensory evaluation was divided into four grades; the certain specific standards required to evaluate them are listed in Table 2. In the data processing of sensory score, the final sensory score was the median of evaluation scores by the evaluation team. For example, the odor sensory scores of T. matsutake were 3, 3, 2, 3, 2, and then the final odor sensory score was 3.
The pH and soluble solids content (SSC) test procedures were as follows: Put 5 g T. matsutake into a mortar that was surrounded with ice. Add 20 mL of phosphate buffer (PB) containing 1% polyvinyl pyrrolidone (PVP) with a pH of 6.8 and a concentration of 0.05 mol/L. The mixture was ground with a pestle in low temperatures, and then filtered the mixture with 4 layers of gauze. The pH value was accessed using a pHB-4 pH meter (INESA.CC, Shanghai, China) by measuring the filtered clear liquid. The content of SSC was gotten by measuring the filtered clear liquid using a glycometer refractometer (LH-B55, Hangzhou, Zhejiang, China).
Moisture content was measured using a moisture meter (Shenzhen crown and moisture meter technology co., LTD., Shenzhen, China) [13]. The weight of each test piece model was 0.05 kg to 0.10 kg.
Correlation analysis was carried out between the data of factors and the remaining shelf life of T. matsutake. Experimental data and remaining shelf life data were normalized first, and then Microsoft Excel mathematics software was used for correlation analysis. We selected and recorded the correlation data between the remaining shelf life and various experimental indicators. The greater the correlation coefficient, the more significant relationship between these indexes and their remaining shelf life. The representative indexes were selected as the independent variables and the remaining shelf life was the dependent variable of the shelf life prediction models.

T. matsutake is a kind of respiratory climacteric wild edible fungus. It still continues to live even though there is no water and nutrient supply after harvest. Respiration becomes the dominant process of its metabolism [11]. Low oxygen packaging can reduce the respiration rate and maintain shelf-life longer or with better quality than normal air packaging [22]. Thus, the proportion of oxygen and carbon dioxide concentration in MAP conditions affect its quality and shelf life. In this paper, we set controlled trials: group four (air) was compared with group one (1% O2, 21% CO2, and 78% N2), group two (5% O2, 17% CO2, and 78% N2), and group three (10% O2, 12% CO2, and 78% N2) from 0 to 22 days of storage at 4 °C and 90% RH in polyethylene pouches, to study its shelf life characteristics in different MAP conditions. Sensory characteristics and physical and chemical characteristics of fresh Tibetan T. matsutake changes are shown in Figure 3 and Figure 4.

In some studies, sensory evaluation was also defined as the consumer willingness to purchase [16]. The limit of acceptability by the consumers, in days, was identified by the time at which less than 50% of purchases occurred, as generally recommended by researchers [41,42]. In this experiment, the shelf life was terminated when more than 50% of the panel considered that the fresh T. matsutake did not need to make the sensory evaluation any more, as they had no market value. The shelf life in group one, two, three, and four was 18 days, 14 days, 12 days, and 10 days, respectively. In preset MAP conditions, the shelf life of T. matsutake was reduced with the increasing of oxygen concentration in the Figure 3. Furthermore, the sensory evaluation score of these four kinds of indicators decreased with the extension of storage time.
Sensory indicators included the hardness (cap, stipe), color, and odor of fresh Tibetan T. matsutake, whose sensory evaluation scores are shown in Figure 3. The odor evaluation decreased more obviously with the increase of time and oxygen, as seen in Figure 3d. Fresh T. matsutake has a strong unique fragrance as it grows. Previous studies in the fragrance and freshness of T. matsutake suggested that about 2/3 fragrance and 1/3 to 2/3 freshness were lost when they were stored in the air at room temperature for 8 h after collection. After 24 h, only 20% fragrance and freshness remained [5]. Therefore, the odor is the more sensitive indicator for the freshness of T. matsutake.

3.1.2. Changes in Physical and Chemical Characteristics

Fresh T. matsutake continued to live after harvest. Its life activities were the physiological changes of maturation and senescence on the basis of basic metabolism such as respiration and transpiration. In order to research the physiological changes of fresh T. matsutake after harvest, we measured its physical and chemical characteristics, including the pH, soluble solids content (SSC), and moisture content (MC) in this experiment. The biological tissue of fresh T. matsutake is tender. After harvest, the moisture content of T. matsutake is up to 90%, for protecting its young and tender tissue. However, because of its active metabolism and transpiration, it loses water and consumes nutrients quickly [3].
The changes as a function of time of test indicators are illustrated in Figure 4. According to previous research and data changes, Figure 4 can be divided into three periods, S1, S2, and S3, respectively, to interpret the physiological changes of T. matsutake.
As seen in Figure 4a, the changes in pH dramatically increased in the beginning during period S1. That is because the cap of T. matsutake spread after harvest, like many mushrooms. In this period, the quality declined a lot as a consequence of respiration. Furthermore, compared with traditional preservation methods, MAP delayed its quality change, which sustained more than two days. Then, the changes of pH slowly decreased in period S2, which sustained more than eight days. In this period, T. matsutake were breathing smoothly. However, the fluctuation of pH suggests a great deal more volatility in period S3, which also appeared in period S3 of Figure 4b,c, the changes of SSC and MC. With the preservation time flowing, individual quality differences of T. matsutake greatly increased. Therefore, the experiment data showed great fluctuation and instability.
In Figure 4b,c, the changes of SSC and MC decreased in the period S1, lasting about four days. In period S2, the content of SSC remained stable over time, and the MC slowly decreased. Furthermore, in period S3, the fluctuation of SSC and MC changed too dramatically to analyze the variation trend. Comparing the changes of SSC and MC in period S3, we found that when the line of MC decreased, the line of SSC increased between the tenth day and the fourteenth day. Furthermore, when the line of MC increased, the line of SSC decreased between the fourteenth day and the eighteenth day. We can conclude that there is a correlation between SC and MC of fresh T. matsutake in the process of preservation.
In Figure 4c, the MC decreased in the period S1 and period S2. In the period S3, the MC changed differently in every group, whose trends were to increase first and then decrease. In these experiments, individual differences did exist between T. matsutake. Except for this reason, T. matsutake would experience the autolysis phenomenon after its shelf life, which could make the MC increase. Like in group four, the shelf life had stopped on the tenth day through the sensory evaluation. In days 14–18, we considered that groups two, three, and four had stopped their shelf life, and the pH, SSC, and MC changes in these days were considered as its deterioration periods.

Before we used the BP neural network to predict the shelf life of T. matsutake, the BP neural network had to be trained first. The data measured in each group was reserved; one group was for predictions, and the rest of the experimental data were substituted into the BP neural network for training. The remaining shelf life of T. matsutake was predicted by using the above-mentioned trained BP neural network model. The results of the remaining shelf life under the four experimental conditions are shown in Table 4.
In Table 4, the same results were predicted for several consecutive days: 4th day to 10th in group 1; 4th day to 6th in group 2,3,4, because of the effects of sensory evaluation according to Table 2, T. matsutake sensory quality scoring standard. There were only four levels of sensory evaluation of fresh T. matsutake, which led to the same value of three sensory indicators in the middle days of the shelf life. Compared with the fluctuation of the physical and chemical index image in Section 3.1, the prediction results showed similar changes: they rapidly decreased in the first four days, and slowly decreased between the fourth day and tenth day. After the tenth day, the prediction results changed a lot.

This research was funded by the National Nature Science Foundation of China for the project entitled “Multiple information fusion based quality monitoring of Tibet edible fungi in cold chain” (31460421), and the China–Slovak bilateral project (8-2). 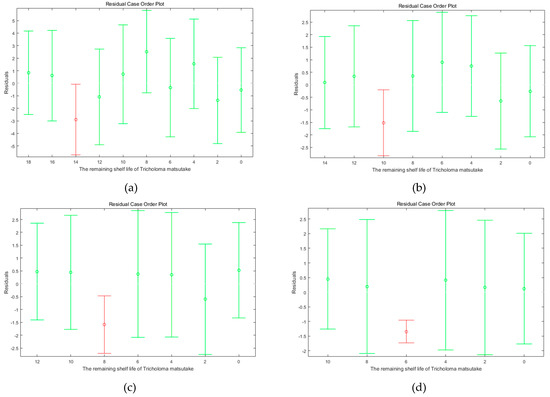 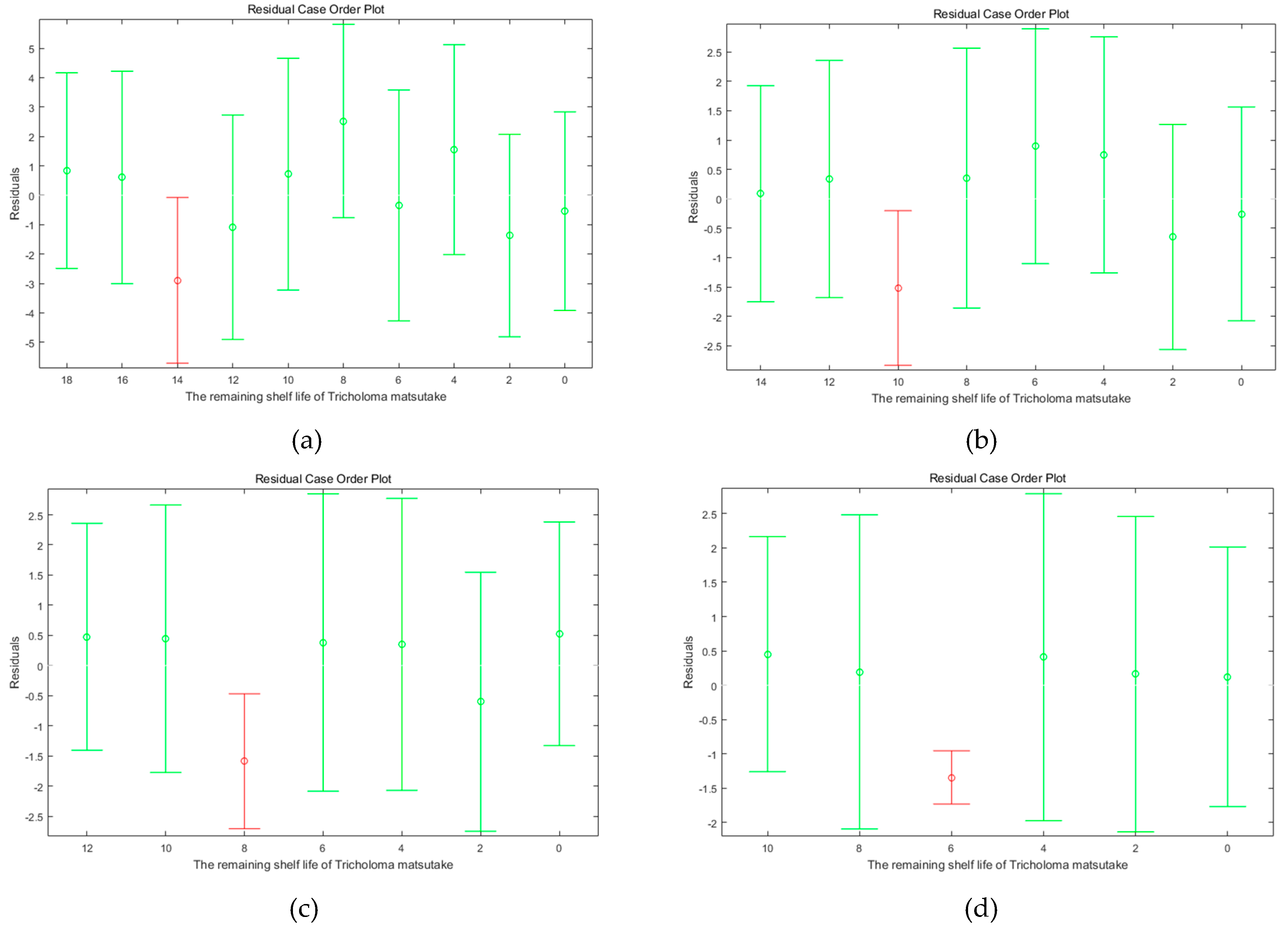