Okra-Thioglycolic Acid Conjugate—Synthesis, Characterization, and Evaluation as a Mucoadhesive Polymer

This research endeavors to inspect the chemical and biological profiling of methanol and dichloromethane (DCM) extracts prepared from Abutilon figarianum Webb. Total bioactive constituents and secondary metabolites were assessed via ultra-high performance liquid chromatography (UHPLC-MS). Biological effects were evaluated via antioxidant and enzymes inhibitory assays. The methanol extract was able to give the highest phenolic (51.92 mg GAE/g extract) and flavonoid (72.59 mg QE/g extract) contents and was found to contain 11 bioactive metabolites, including flavonoid, alkaloid, phenolic and fatty acid derivatives, as accessed by UHPLC-MS analysis. Similarly, the phytochemical profiling of the DCM extract tentatively identified the 12 different secondary metabolites, most of these were fatty acid derivatives. The methanol extract was most active in the radical scavenging, reducing power and total antioxidant power assays, while dichloromethane extract showed the highest metal chelating activity. For enzyme inhibition, the DCM extract showed the highest activity against cholinesterases, glucosidase and amylase, whereas methanol extract was most active against tyrosinase. Docking studies have supported the observed biological activity, where isobergapten showed higher activity against tyrosinase (−7.63 kcal/mol) with inhibition constant (2.55 µM), as opposed to other enzymes. The observed antioxidant and inhibitory potentials of A. figarianum against the studied enzymes tend to endorse this plant as a prospective source of bioactive phytochemicals. View Full-Text
Keywords: phytochemical; docking; antioxidant; enzyme inhibition; bioactive molecules phytochemical; docking; antioxidant; enzyme inhibition; bioactive molecules
►▼ Show Figures 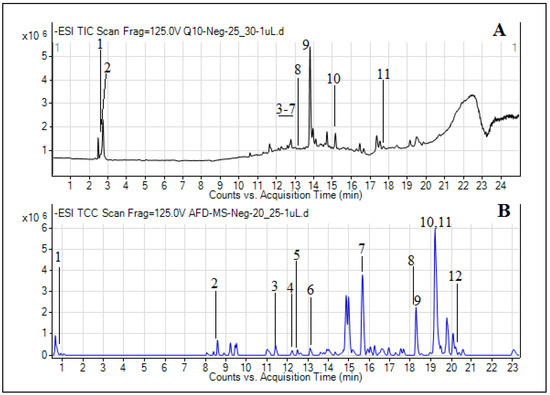