An Investigation into the Future Changes in Onset and Cessation of Rain and Their Variability over the Aswa Catchment, Uganda
Previous Article in Special Issue

Trend-Run model was performed to estimate the trend in surface temperatures recorded at 12 sites in Guinea from 1960 to 2016 and to examine the contribution of each climate forcing. The coefficient of determination (R2) calculated varies between 0.60 and 0.90, it provides total information about the simulation capability of the model. The decadal trend values also calculated show an upward trend (between 0.04 °C ± 0.06 °C decade−1 and 0.21 °C ± 0.06 °C decade−1). In addition, forcings’ contributions were quantified, and the annual oscillation (AO) contribution is higher for most of the stations, followed by semiannual oscillation (SAO). Among the forcings, the tropical Northern Atlantic (TNA) contribution is greater than that of the sunspot number (SSN), Niño3.4 and Atlantic Niño (AN). Moreover, the Mann-Kendall test revealed a positive significant trend for all stations except at the Macenta site. Additionally, with sequential Mann-Kendall test, trend turning points were found only for the stations of Mamou, Koundara and Macenta at different dates. The temperature anomalies depict warming episodes (1970s, 1980s, 1984 and 1990s). Since then, the temperature is consistently increasing over the country. A significant warming has been shown, which might be further investigated using these models with additional contributing factors. View Full-Text
Keywords: temperature; climate forcings; trends; climate warming; Guinea temperature; climate forcings; trends; climate warming; Guinea
►▼ Show Figures 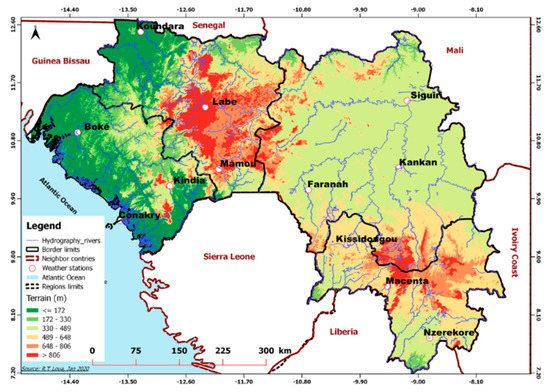