Impact of Climate and Land Use/Land Cover Change on the Water Resources of a Tropical Inland Valley Catchment in Uganda, East Africa
Previous Article in Journal

Stakeholders’ Perception of Climate Actions in Some Developing Economies

An Investigation into the Future Changes in Onset and Cessation of Rain and Their Variability over the Aswa Catchment, Uganda

Future global warming may result in extreme precipitation events leading to crop, environment and infrastructure damage. Rainfall is a major input for the livelihood of peasant farmers in the Aswa catchment where the future rainfall variability, onset and cessation are also likely to be affected. The Aswa catchment has limited rainfall data; therefore, use of secondary datasets from Tropical Rainfall Measuring Mission (TRMM) is considered in this study, based on the close correlation of the recorded and TRMM rainfall. The latter was used to calibrate the statistical downscaling model for downscaling of two general circulation models to simulate future changes in rainfall. These data were analyzed for trends, wet and dry conditions/variability; onset and cessations of rain using the Mann–Kendall test, Standardized Precipitation Index (SPI) and the cumulative percentage mean rainfall method, respectively. Results show future rainfall is likely to increase, accompanied by increasing variability reaching as high as 118.5%. The frequency of SPI values above 2 (extreme wetness) is to increase above current level during mid and end of the century. The highest rainfall variability is expected especially during the onset and cessation months, which are generally expected to come earlier and later, by up to four and five weeks, respectively. The reliability worsens from the midterm (2036–2065) to long term (2066–2099). These likely changes in rainfall quantities, variability, onset and cessation months are some of the key rainfall dynamics that have implications for future arable agriculture, environment and water resource availability and planning over the Aswa catchment, as is increasingly the case elsewhere. View Full-Text
Keywords: SDSM; SPI; mann–kendall; rainfall variability; rainfall onset and cessation SDSM; SPI; mann–kendall; rainfall variability; rainfall onset and cessation
►▼ Show Figures 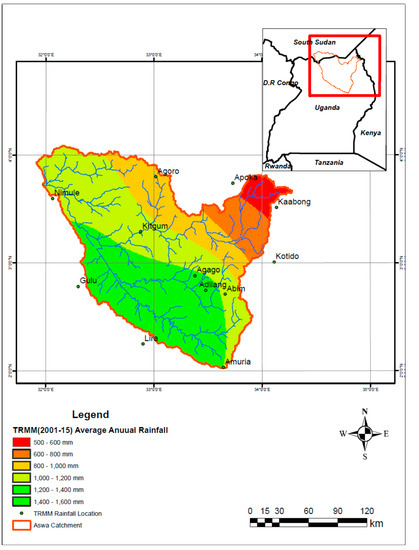 Iwadra, M.; Odirile, P.T.; Parida, B.P.; Moalafhi, D.B. An Investigation into the Future Changes in Onset and Cessation of Rain and Their Variability over the Aswa Catchment, Uganda. Climate 2020, 8, 67.


Iwadra M, Odirile PT, Parida BP, Moalafhi DB. An Investigation into the Future Changes in Onset and Cessation of Rain and Their Variability over the Aswa Catchment, Uganda. Climate. 2020; 8(6):67.