SI: Survivability under Overheating: The Impact of Regional and Global Climate Change on the Vulnerable and Low-Income Population
Previous Article in Journal

Impacts of Climate Change on the Water Resources of the Kunduz River Basin, Afghanistan

Trends of Climate Change and Variability in Three Agro-Ecological Settings in Central Ethiopia: Contrasts of Meteorological Data and Farmers’ Perceptions

Using gridded daily temperature and rainfall data covering 30 years (1988–2017), this study investigates trends in rainfall, temperature, and extreme events in three agro-ecological settings in central Ethiopia. The Mann Kendall test and Sen’s slope estimator were used to examine the trends and slope of changes in climate indices. The profile of farmers whose perception converges with or diverges from meteorological data was characterized using polling. The average annual temperature has increased by 0.4 and 0.3 °C per decade in the lowland and midland areas, respectively. Average annual rainfall has increased only in the midland areas by 178 mm per decade. Farmers’ perception of increasing temperature fairly aligns with meteorological data. However, there is a noticeable difference between farmers’ perception of rainfall and meteorological data. The perception of farmers with poor economic status, access to media, and higher social capital aligns with measured trends. Conversely, the perception of economically better-off and uneducated farmers diverges from meteorological data. Accurate perception is constrained by the failure of the traditional forecast methods to describe complex weather variabilities and lack of access to down-scaled weather information. The findings highlight the importance of availing specific and agro-ecologically relevant weather forecasts to overcome perceptual problems and to support effective adaptation. View Full-Text
Keywords: temperature; rainfall; drought; weather; livelihood temperature; rainfall; drought; weather; livelihood
►▼ Show Figures 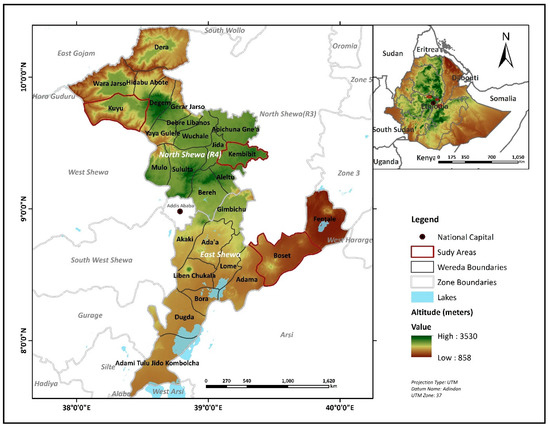