The Effects of Physical, Social, and Housing Disorder on Neighborhood Crime: A Contemporary Test of Broken Windows Theory
Previous Article in Journal

Types of Crime, Poverty, Population Density and Presence of Police in the Metropolitan District of Quito

This exploratory study identifies spatial patterns of crimes and their associations with the index of Unsatisfied Basic Needs (UBN), with Communitarian Policy Units (CPU) density, as well as with population density. The case study is the Metropolitan District of Quito. Correlation analyses were applied between number of registers of each type of crime, and the UBN index, CPU density and population density measures. The spatial autocorrelation index of Getis-Ord Gi* was calculated to identify hotspots of the different types of crime. Ordinary least squares regressions and geographically weighted regressions considering types of crime as dependent variables, were calculated. Larceny and robbery were found to be the predominant crimes in the study area. An inverse relationship between the UBN index and number of crimes was identified for each type of crime, while positive relationships were found between crimes and CPU density, and between crimes and population density. Significant hotspots of fraud, homicide, larceny, murder, rape and robbery were found in all urban parishes. Additionally, crime hotspots were identified in eastern rural parishes adjacent to urban parishes. This study provides important implications for crime prevention in the Metropolitan District of Quito (MDQ), and the obtained results contribute to the ecology of crime research in the study area. View Full-Text
Keywords: crime; poverty; unsatisfied basic needs; population density; communitarian police units crime; poverty; unsatisfied basic needs; population density; communitarian police units
►▼ Show Figures 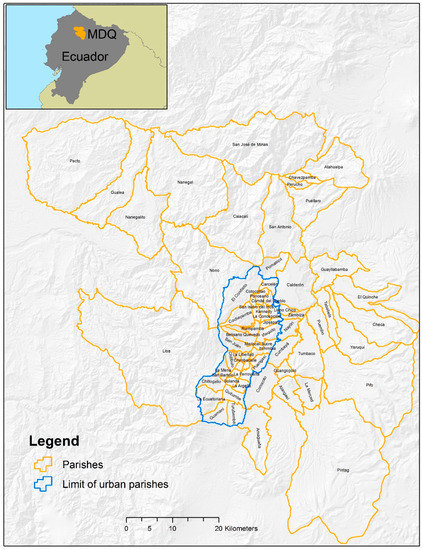