The aim of the present study was to establish the best experimental conditions that lead to the extracts richest in polyphenolic compounds obtained from pomace and canes of Vitis vinifera. In this regard, a D-Optimal design of experiments (DoE) method was applied to investigate the extraction process parameters from each of three materials: red pomace (RP), white pomace (WP) and canes (C). The input variables were the extraction temperature and the ethanol ratio and as response, the total polyphenols content (TPC) was determined. A design space was generated for each of the plant materials and the most concentrated polyphenol extracts were obtained using 50% ethanol at a temperature of 80 °C. Further, the phenolic profiles of the concentrated extracts were detected by LC/MS/MS and the results showed that WP extract was richer in polyphenolic compounds, both flavonoid and phenolic acids, followed by the RP and C extracts. The antioxidant assays revealed that WP and RP extracts exhibited a higher antioxidant activity which correlated to the high content of polyphenols. These findings revealed that RP, WP and C, currently considered agricultural wastes from winery, may be valorized as an important source of natural antioxidants. View Full-Text
Keywords: Vitis vinifera; pomace; canes; polyphenolic compounds; antioxidant activity; design of experiments; waste management Vitis vinifera; pomace; canes; polyphenolic compounds; antioxidant activity; design of experiments; waste management
►▼ Show Figures 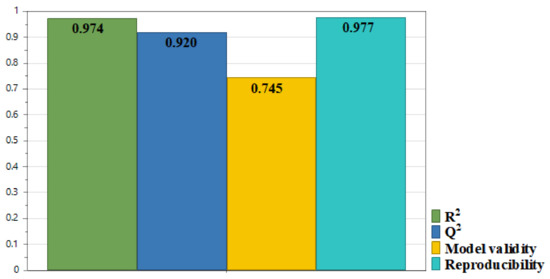