Saliva samples of seventeen soccer players were analyzed by nuclear magnetic resonance before and after an official match. Two different ways of normalizing data are discussed, using total proteins and total metabolite concentrations. Changes in markers related to energy, hydration status, amino acids and other compounds were found. The limits and advantages of using saliva to define the systemic responses to exercise are examined, both in terms of data normalization and interpretation, and the time that the effect lasts in this biofluid, which is shorter to that commonly observed in blood. The heterogeneous nature and different timing of the exercise developed by players also plays an important role in the metabolic changes that can be measured. Our work focuses mainly on three different aspects: The effect that time sampling has on the observed effect, the type of normalization that is necessary to perform in order to cope with changes in water content, and the metabolic response that can be observed using saliva. View Full-Text
Keywords: metabolomics; sport metabolomics; NMR; exercise; saliva; energy metabolism; hydration status metabolomics; sport metabolomics; NMR; exercise; saliva; energy metabolism; hydration status
►▼ Show Figures 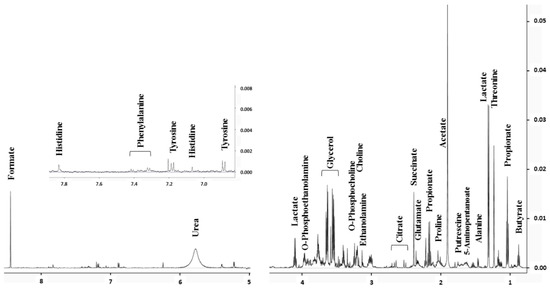