To Play or Not to Play: Can an Instrument Really Impact Lip and Tongue Performance?
Next Article in Special Issue

:
Individuals suffering from sensitive skin often have other skin conditions and/or diseases, such as fair skin, freckles, rosacea, or atopic dermatitis. Genome-wide association studies (GWAS) have been performed for some of these conditions, but not for sensitive skin. In this study, a total of 23,426 unrelated participants of European ancestry from the 23andMe database were evaluated for self-declared sensitive skin, other skin conditions, and diseases using an online questionnaire format. Responders were separated into two groups: those who declared they had sensitive skin (n = 8971) and those who declared their skin was not sensitive (controls, n = 14,455). A GWAS of sensitive skin individuals identified three genome-wide significance loci (p-value < 5 × 10−8) and seven suggestive loci (p-value < 1 × 10−6). Of the three most significant loci, all have been associated with pigmentation and two have been associated with acne.
Keywords:
sensitive skin; genome-wide association studies

Sensitive skin syndrome is defined by the occurrence of unpleasant sensations (stinging, burning, pain, pruritus, and tingling sensations) in response to stimuli that normally would not provoke such sensations [1]. Often, these symptoms are not accompanied by any outward signs of irritation. Individuals suffering from sensitive skin often have other dermatologic conditions, such as, rosacea, atopic dermatitis, seborrheic dermatitis and psoriasis [2,3]. Although sensitive skin can be found among any ethnicity or skin type, it is more likely to be experienced by fair skinned individuals with a greater tendency to freckle and sunburn, and with a greater tendency toward blushing and flushing. Prevalence also differs between gender, with women consistently reporting higher sensitive skin [4].
To date, no genome-wide association studies (GWAS) have been performed on a general sensitive skin trait. However, acne, rosacea, eczema, and psoriasis have been intensively studied, and more than one hundred GWAS loci have been identified. Although these skin diseases are all characterized by genes involved in inflammation, including HLA loci and the prominent role of interleukin signaling pathways, the genetic architectures show sharp differences. In particular, skin pigmentation genetic architecture [5], including genes such as SLC45A2, IRF4, or HERC2, is very apparent in rosacea [6] and to a lesser extent in acne [7], but is absent in eczema [8] and psoriasis [9]. In rosacea, pigmentation genes surface among the top ten associated loci and they are only surpassed by HLA loci [10,11].
In this study, we performed a GWAS on 23,426 consenting participants from a 23andMe research cohort, who self-reported on sensitive skin and other skin conditions via an online survey and identified three loci significantly associated with sensitive skin.

Participants from the customer base of 23andMe, Inc. (Sunnyvale, California) provided informed consent and answered surveys online according to our human subject protocol, which was reviewed and approved by Ethical and Independent Review Services, a private institutional review board (http://www.eandireview.com). A total of 23,426 unrelated participants of European ancestry responded to the following survey question: “How would you describe your skin? Very sensitive, moderately sensitive, slightly sensitive, or not sensitive”. This format was identical to that used in a number of surveys conducted on the prevalence of sensitive skin (reviewed in [12]). A separate question in the GWAS survey asked participants: "Which of the following, if any, skin conditions have you been diagnosed with or treated for? Please select all that apply." The survey question included the skin conditions listed in Table 1. There were 8971 participants who reported sensitive skin (88.4% female, 11.6% male). Participants reporting no skin conditions were classified as controls (14,455 controls; 54.3% female, 45.7% male). Among the individuals reporting sensitive skin, a portion also reported suffering from acne (41.3%), atopic dermatitis (30.5%), rosacea (19.9%), and/or psoriasis (9.2%), as shown in Table 1. Overall, seven out of ten participants with sensitive skin reported at least one of these four skin diseases.
Participants were genotyped using Illumina genotyping arrays and imputed against a merged reference panel combining the 1000 Genomes and UK10K panel. After pre- and post-GWAS quality controls, 1.3M and 21.2M of genotyped and imputed variants, respectively, were included in the final association result dataset. For each variant, association was tested by a logistic model including age, sex, the first five genetic principal components, and the genotyping arrays, as co-variables. For the top GWAS variants, a second logistic model was used, including skin color as a covariable to control for pigmentation. The survey question for skin color was "Please select the skin color that best matches that of your facial skin. Choose between five colored images." Association results were adjusted for a genomic control inflation factor λ = 1.036. A more complete description of the 23andMe GWAS pipeline was published previously [13].

The GWAS of sensitive skin identified three genome-wide significance loci (p-value < 5 × 10−8) and seven suggestive loci (< 1 × 10−6), as shown in Table 2. The Manhattan plot is shown in Figure 1 and the regional plots for each locus are shown in the Supplementary Materials. The three significant associations are well known skin pigmentation GWAS loci.
The strongest association was found in the interferon regulatory factor 4 (IRF4) locus on chromosome 6. The top variant, rs12203592 (p-value = 1.0 × 10−26; OR = 1.36 [1.28–1.44]) is an intergenic variant, located close to the IRF4 gene, which encodes for the transcriptional activator of the MHC class I promoters [14,15]. IRF4 (and the top variant) have been reported to be associated with skin pigmentation [16].
The top variant rs1805007 (p-value = 1.9 × 10−25; OR = 1.54 [1.40–1.64]) is a missense variant (Arg151Cys) located in the melanocortin 1 receptor (MC1R) gene. Melanocortin 1 receptor protein, or melanocyte stimulating hormone, is located on the surface of melanocytes. [15] Several skin-related traits, including skin pigmentation, sun sensitivity, and skin cancer, have been reported to be associated with this missense variant in MC1R.
Finally, the top variant rs35407 (p-value = 1.2 × 10−9; OR = 0.69 [0.61–0.77]) is a 3’UTR variant located in the solute carrier family 45 member 2 (SLC45A2), gene encoding for a protein identified with melanocytes. Its exact function is unknown, but it likely plays a role in melanin production. [15] To date, rs35407 has been associated with several types of skin-related cancers [17] and with skin, eye, and hair color [18].
The seven suggestive associations also show a strong signature of skin pigmentation architecture, with four GWAS signals in pigmentation loci TYR, HERC, ASIP, and KIAA0930/NUP50. In addition, the top variant rs77013500 is an intronic variant in the MPDZ gene and it has been associated with hair loss. The two remaining suggestive associations (rs61795905 and rs764649965) are unknown.
It was not surprising to observe significant associations in known skin pigmentation loci—more than 50% of participants with sensitive skin also reported acne and rosacea, as shown in Table 1. The genetic architectures of these skin diseases are known to contain many skin pigmentation genes.
It was, however, unexpected to not observe significant associations in HLA and interleukin genes, which have been shown to be linked with the inflammatory nature of these skin diseases. Because sensitive skin is known to be associated with fair skin, we re-analyzed the top variants with an additional skin color covariable. Although sensitive skin was highly correlated to lighter skin color (p-value = 1.9 × 10−99; OR = 1.81 [1.71–1.92]), the associations were not completely washed out, as shown in Table 2. This could suggest that a general sensitive skin phenotype is more driven by sensory than inflammatory processes.
Sensitive skin is a multi-faceted condition involving disruption in epidermal barrier function and neurosensory dysfunction [2]. Comprehending the genetic basis of sensitive skin, and the commonalities with other skin diseases, is an important component of a thorough understanding of this condition.

The full GWAS summary statistics for the 23andMe discovery data set will be made available through 23andMe to qualified researchers under an agreement with 23andMe that protects the privacy of the 23andMe participants.

This research was funded by The Procter and Gamble Company. 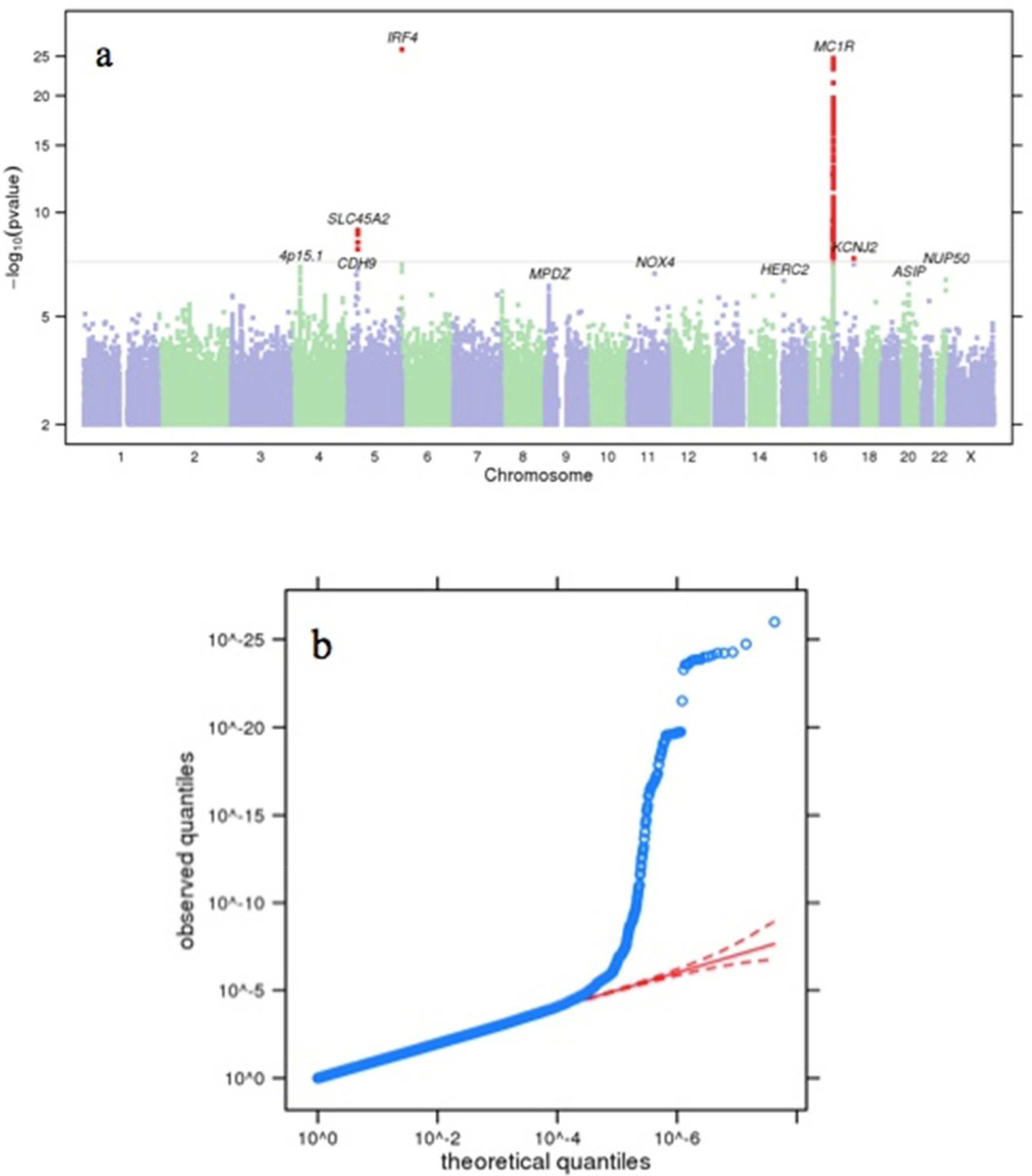