Carnosine has several physiological roles, from intracellular pH buffering to antioxidant activities, which all depend on bioavailability. This study was conducted in a human skin 3D model and focuses on the effects of the topical delivery of carnosine, from a dermo-cosmetic gel, through the stratum corneum in the presence of a magnesium ion as a complexing agent. To evaluate possible enhancement for small peptide delivery to the skin from simple cosmetic formulations, we discovered that complexation was able to improve the delivery of carnosine into human skin 3D models by application in gel formulation. The concentrations of carnosine released in the underlying media and those that remained in the reconstructed human epidermis (RHE) tissues after 24 and 48 h exposure were measured. Moreover, the influence of magnesium ions was also evaluated comparing the same formulation with and without the salt. The results obtained in this study support hypothesis that magnesium can influence the delivery of small peptides and that the gel formulation based on the carnosine-magnesium complex allows for superior delivery of carnosine in the lower skin layer at a concentration up to 60% more than carnosine alone. View Full-Text
Keywords: carnosine; complexation; dermo-cosmetic formulation; topical delivery carnosine; complexation; dermo-cosmetic formulation; topical delivery
►▼ Show Figures 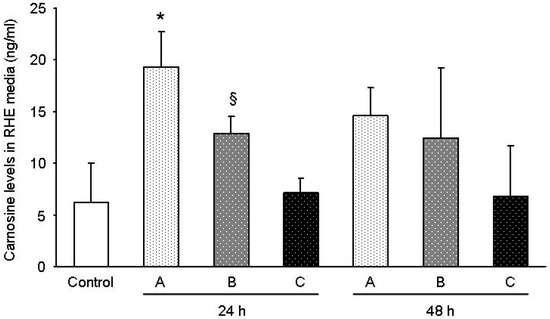