Analysis of Dyes in Cosmetics: Challenges and Recent Developments
Previous Article in Journal

The goal of this study was to investigate the efficacy and the safety of grape pomace (Vitis labrusca L.) obtained from the winemaking process as an antioxidant raw material for cosmetic formulations. Grape pomace was dried and submitted to extraction with solvents. The extracts were filtered and freeze-dried. The extraction carried out with 75% acetone-water showed a better yield (1.9 g·g−1). High performance liquid chromatography (HPLC) analysis confirmed the presence of ellagic acid as an active biocompound in the extracts. The Total phenolic content of freeze-dried extracts reached 69.83 ± 1.02 mg for 75% acetone-water system. Antioxidant activity determined by the 2,2-Diphenyl-1-picrylhydrazyl (DPPH) method revealed there was no statistical difference between the extract (EC50 6.9 ± 0.21) and butylated hydroxytoluene (BHT) (EC50 7.6 ± 0.71). Results of cytotoxicity showed that extracts from grape pomace were safe, even at the highest concentration tested (200 mg·mL−1) against the 3T3 cell line. Scanning Electron Microscopy (SEM) analysis revealed that there were no morphological cell changes of cells treated. Cytoprotection of cells towards the oxidation promoted by the peroxide solution was observed in the lowest concentration tested (0.73 mg·mL−1). Grape pomace from the winemaking process revealed a significant antioxidant activity attributed to its biocompounds. The safety and efficacy of extracts of grape pomace as raw material for cosmetic formulations was proposed through cell culture assays. View Full-Text
Keywords: antioxidant; cell culture; cosmetic ingredient; cytoprotection; ellagic acid; grape marc antioxidant; cell culture; cosmetic ingredient; cytoprotection; ellagic acid; grape marc
►▼ Show Figures 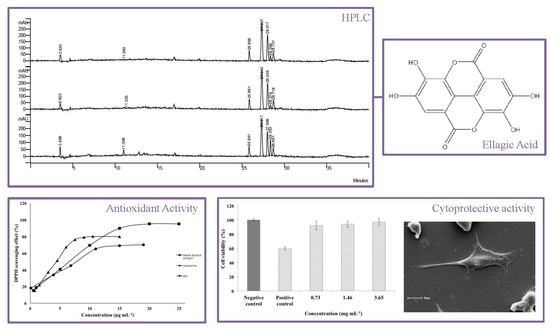