Seasonal Migration and Settlement around Lake Chad: Strategies for Control of Resources in an Increasingly Drying Lake
Previous Article in Journal

Assessment of the Successes and Failures of Decentralized Energy Solutions and Implications for the Water–Energy–Food Security Nexus: Case Studies from Developing Countries

To date, the land–water–food nexus has been primarily addressed from an ecological, hydrological or agronomic angle, with limited response to the governance interface between the input resources. Likewise, in widely used heuristic frameworks, such as the social–ecological system (SES) framework, governance interactions between resources are not sufficiently addressed. We address this gap empirically, using the case of Tajikistan, based on a farm household survey analysis of 306 farmers. The results indicate that land system variables contribute to the willingness to cooperate in irrigation management. Specifically, formal land tenure has a positive effect on farmers paying for water as well as on the likelihood of their investing time and effort in irrigation infrastructure, which is decisive for Tajikistan’s food and fiber production. Irrigation system variables show that, e.g., being an upstream user increases the likelihood to contribute to labor maintenance efforts. We further discuss how decisions with respect to the land sector could be designed in the future to facilitate cooperation in other resource sectors. Further, we conclude from a conceptual perspective that the SES framework integrating a nexus perspective can be adapted: either (1) by adding a second-tier “governance nexus” variable inside the governance variable of an irrigation system; or (2) by adding a land resource unit and system outside the irrigation system. View Full-Text
Keywords: land–water–food nexus; social–ecological system; governance linkages; land tenure; irrigation; Tajikistan land–water–food nexus; social–ecological system; governance linkages; land tenure; irrigation; Tajikistan
►▼ Show Figures 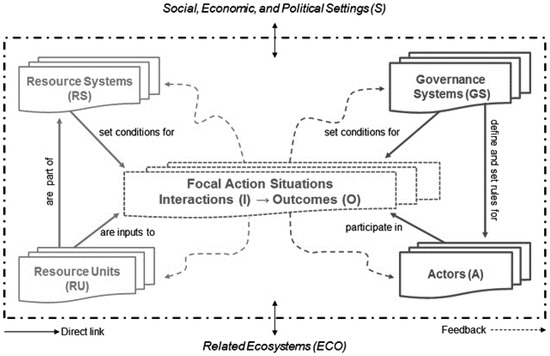