1
Institute of Biomaterials, Department of Materials Science and Engineering, University of Erlangen-Nuremberg, 91058 Erlangen, Germany
2
Institute of Physics of Materials ASCR, CEITEC IPM, Žižkova 22, 61662 Brno, Czech Republic
*
Author to whom correspondence should be addressed.
†
These authors contributed equally to this work and share first co-authorship.
Coatings 2020, 10(5), 483; https://doi.org/10.3390/coatings10050483
Received: 23 April 2020 / Revised: 11 May 2020 / Accepted: 13 May 2020 / Published: 18 May 2020
(This article belongs to the Special Issue Electrochemical and Electrophoretic Deposition of Bioactive Coatings)

Despite their broad biomedical applications in orthopedics and dentistry, metallic implants are still associated with failures due to their lack of surface biofunctionality, leading to prosthesis-related microbial infections. In order to address this issue, the current study focuses on the fabrication and characterization of a novel type of antibacterial coating based on gallium (III)-chitosan (Ga (III)-CS) complex layers deposited on metallic substrates via electrophoretic deposition (EPD). Aiming for the production of homogeneous and monophasic coatings, a two step-procedure was applied: the first step involved the synthesis of the Ga (III)-CS complex, followed by EPD from suitable solutions in an acetic acid–aqueous solvent. The influence of Ga (III) concentration on the stability of the suspensions was evaluated in terms of zeta potential. Fourier transform infrared (FTIR) and energy dispersive X-ray (EDX) spectroscopic analyses indicated the chelation of CS with Ga (III) within the coatings, while scanning electron microscopy (SEM) confirmed that no additional metallic gallium deposited during EPD. Furthermore, the results demonstrated that the wettability, mechanical properties, swelling ability, and enzymatic degradation of the coatings were affected by the quantity of Ga (III) ions. Colony forming unit (CFU) tests showed a strong synergistic effect between CS and Ga (III) in inhibiting Escherichia coli strain growth compared to control CS samples. An in vitro study with MG-63 cells showed that Ga (III)-containing coatings were not toxic after 24 h of incubation. View Full-Text
Keywords: gallium; chitosan; electrophoretic deposition; antibacterial coatings; bioactivity gallium; chitosan; electrophoretic deposition; antibacterial coatings; bioactivity
►▼ Show Figures 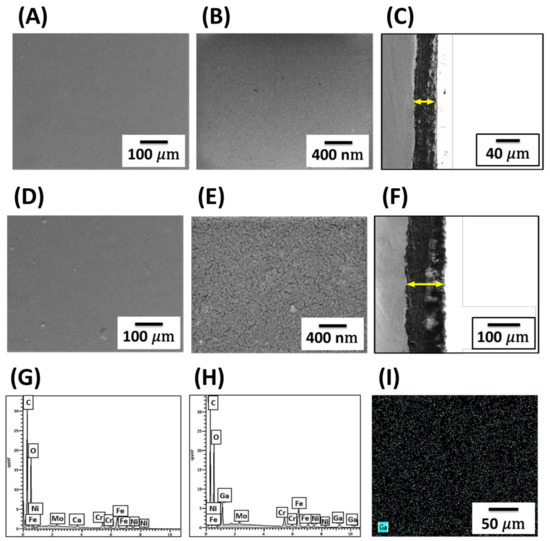