As small, mobilizable replicons with a broad host range, IncQ plasmids are widely distributed among clinical and environmental bacteria. They carry antibiotic resistance genes, and it has been shown that they confer resistance to β-lactams, fluoroquinolones, aminoglycosides, trimethoprim, sulphonamides, and tetracycline. The previously proposed classification system divides the plasmid group into four subgroups, i.e., IncQ-1, IncQ-2, IncQ-3, and IncQ-4. The last two subgroups have been poorly described so far. The aim of this study was to analyze five newly identified IncQ-3 plasmids isolated from a wastewater treatment plant in Poland and to compare them with all known plasmids belonging to the IncQ-3 subgroup whose sequences were retrieved from the NCBI database. The complete nucleotide sequences of the novel plasmids were annotated and bioinformatic analyses were performed, including identification of core genes and auxiliary genetic load. Furthermore, functional experiments testing plasmid mobility were carried out. Phylogenetic analysis based on three core genes (repA, mobA/repB, and mobC) revealed the presence of three main clusters of IncQ-3 replicons. Apart from having a highly conserved core, the analyzed IncQ-3 plasmids were vectors of antibiotic resistance genes, including (I) the qnrS2 gene that encodes fluoroquinolone resistance and (II) β-lactam, trimethoprim, and aminoglycoside resistance genes within integron cassettes. View Full-Text
Keywords: plasmid; IncQ; antibiotic resistance; wastewater treatment plant plasmid; IncQ; antibiotic resistance; wastewater treatment plant
►▼ Show Figures 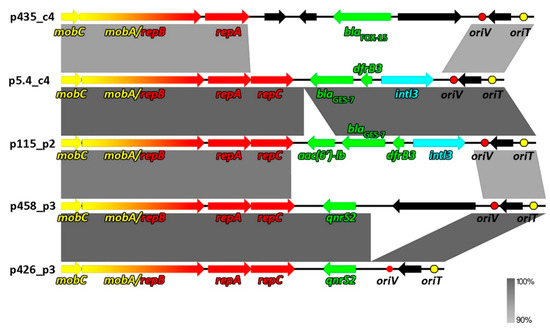