In dental implants, a good sealing between both soft (gum) and hard (bone) tissues and the implant surface is a key factor for the implant success and drastically reduces the risk of periimplantitis and the risk of the implant failure [1,2].
Surface topography can modulate cell behavior by a process called mechanotransduction without the need to change the surface chemical composition. The mechanical signals induced by the different surface topography features, such as pore diameter or pore interspace, are converted to biochemical signals, influencing the cell response to the surface [3,4,5,6].
Nanopatterned surfaces can induce a better organized cytoskeleton and a spread cell morphology, which is known to be beneficial for osteogenic differentiation of mesenchymal stem cells (MSCs) [4,6]. In addition, this capacity to modulate cell behavior through topographical features has been observed using different cell types and could be a strategy to modulate both soft and hard tissue integration.
A nanoscale geometry can be achieved on Ti surfaces using different approaches; with electrochemical anodization being one of the most frequently used [7]. Depending on the electrolyte composition and the reaction conditions, different nanostructures and morphologies can be achieved by electrochemical anodization [5,7,8]. These nanoscale morphology modifications have been proven to have an important effect on cell behavior. Small pore diameters (less than 100 nm) have been shown to promote cell adhesion, proliferation, and differentiation, while bigger diameters can promote cell apoptosis [6,9,10].
Although a lot of research is being developed to improve the bone tissue integration of Ti implants, few studies assess both soft and hard tissue integration at the same time. In this study, we aimed to produce and characterize different nanostructured Ti surfaces that promote both human gingival fibroblasts’ (hGF, as a soft tissue model) and human bone-marrow mesenchymal stem cells’ (hBM-MSC, as a hard tissue model) adhesion and differentiation. Two different nanostructures on TiO2 were produced by changing anodization parameters and characterized by atomic force microscopy (AFM), scanning electron microscopy (SEM), and contact angle analysis. Then, we analyzed nanoparticle release from the surface and its effect on hGFs. Finally, we evaluated the adhesion and differentiation of the different surfaces on hGFs and on hBM-MSC.

2.5. Analysis of Particle Release from the Different Surfaces and Its Effect on Biocompatibility

On one hand, the different Ti discs were incubated at 37 °C with DMEM for seven days in order to obtain conditioned media. On the other hand, hGFs (7 × 103 cells per well) were seeded in a 96–well plate and allowed to grow until they achieved confluence. Then, conditioned media from Ti discs were added to the cells. After 48 h lactate dehydrogenase (LDH) activity was determined from culture media following the manufacturer’s instructions (Cytotoxicity Detection kit, Roche Diagnostics, Manheim, Germany) and total metabolic activity was analyzed using Presto Blue reagent following the manufacturer’s protocol, at 1 h of reagent incubation time. Apoptosis activation was analyzed using caspases 3/7 activation with the Caspase-Glo® 3/7 assay (Promega, Madison, WI, USA). Finally, another set of Ti discs was incubated at 37 °C with ultrapure water for seven days in order to measure nanoparticle release by dynamic light scattering (DLS) using a Zetasizer ZS90 (Malvern Panalytical Ltd., Malvern, UK) and a ZetaView® nanoparticle tracking analyzer (NTA) (ParticleMetrix GmbH, Meerbusc, Germany).

The bioactivity on hGFs and hBM-MSCs was only assessed using NN surfaces.

hGFs and hBM-MSCs were allowed to adhere for 30 min to the different surfaces. Unbounded cells were removed by washing twice with PBS and cell adhesion was analyzed using Presto Blue reagent (Life Technologies, Carlsbad, CA, USA) following the manufacturer’s protocol, at 24 h of reagent incubation time.

After 48 h of culture, LDH activity was determined from culture media of both cell types following the manufacturer’s instructions (Cytotoxicity Detection kit, Roche Diagnostics, Manheim, Germany). The results were presented relative to the LDH activity in the medium of cells cultured in tissue culture plastic (low control, 0% of cell death) and of cells growing on tissue culture plastic treated with surfactant Triton X-100 1% (high control, 100% of cell death).

After 15 d of culture, ALP activity of hBM-MSC lysate was analyzed as previously described [13].

All data are presented as mean value ± standard error of the mean (SEM). The Kolmogorov–Smirnov test was done to assume parametric or non-parametric distributions. Differences between groups were assessed by one-way analysis of variance (ANOVA) test using Bonferroni as post hoc or by Kruskall Wallis depending on their normal distribution when more than two experimental groups were compared; when two groups were compared, the differences between groups were assessed by Student’s t-test. SPSS software (version 25.0, Chicago, IL, USA) and GraphPad Prism (version 7, La Jolla, CA, USA) were used. The results were considered statistically significant at p-values < 0.05.

3.1. Characterization of Surface Topography and Wettability

Two different nanostructures were obtained with the anodization conditions used as demonstrated by the SEM images: NP and NN (Figure 1). On one hand, higher voltage and low H2O content produced an NP structure on the surfaces; on the other hand, by decreasing voltage and increasing H2O content, an NN structure was produced (Table 1).
The nanostructures obtained showed different surface roughness and wettability (Table 1). Thus, the average surface roughness (Sa) of the obtained NN surfaces was higher than NP and Ti. Meanwhile, water contact angle (CA) measurements indicated that, although all tested surfaces are hydrophilic (CA lower than 90°), NP surfaces are more hydrophilic than those of NN and Ti.

3.2. Analysis of Particle Release from the Different Surfaces and Its Effect on Biocompatibility

The first step that we undertook in order to assess the biocompatibility of the obtained surfaces was to analyze cytotoxicity and metabolic activity of hGF cells using media conditioned with the modified surfaces to test whether there was indirect toxicity on the cells. hGF cells cultured with NP conditioned media showed lower metabolic activity compared with the other groups, although no significant differences on cytotoxicity levels were found (Figure 2). In addition, the NP group showed higher caspases 3/7 activity (Figure 2).
The presence of nanoparticles released from the surfaces was evaluated through DLS and NTA. Only NP surfaces showed nanoparticle release (Figure 2), obtaining a peak between 100 nm and 1000 nm. In addition, these particles presented a mean size of 220.5 nm and a concentration of 1.08 × 109 particles/mL. Taking all these results together, NP surfaces were excluded from further studies.

In order to determine the potential effects of nanostructuration on gum tissues and its osteogenic capacity, the biological activity of the NN surface was evaluated with hGFs and hBM-MSCs.
The adhesion of hBM-MSCs and hGFs to Ti and NN surfaces was tested 30 min after seeding (Figure 3), with both cell types showing similar adhesion to both NN and Ti surfaces. After 48 h of culture, no cytotoxicity was found (Figure 3), showing no significant differences between cells cultured onto NN surfaces (hGF) or significantly lower LDH activity levels (hBM-MSC) than the negative control.
Furthermore, we evaluated the effect of NN surfaces on hGF and hBM-MSC cells on metabolic activity at 48 h, 7 d, and 14 d of culture. Metabolic activity of hGFs was higher after 14 days of culture on NN surfaces compared with Ti, while hBM-MSC cultured on this nanostructured surface showed higher metabolic activity compared to Ti after 8 days of culture, although differences were lost after 15 days of culture (Figure 3).
In order to evaluate the effect of the obtained NN surface on hGFs and hBM-MSCs, collagen deposition (hGFs) and ALP activity (hBM-MSCs) were analyzed as functional markers. Collagen deposition of hGF cells after 14 days of culture was higher on NN compared with Ti. hBM-MSCs cultured on NN surfaces showed higher ALP activity compared with Ti (Figure 3).
Finally, we analyzed the alignment and distribution of both cell types on Ti and NN surfaces. Image analyses showed that hGFs and hBM-MSC cultured on NN structured Ti surfaces exhibit a high frequency of alignment (Figure 4). In contrast, cells cultured on control Ti surfaces showed a random orientation, although being distributed through the entire surface area (Figure 4).

In conclusion, we developed a NN nanostructured Ti surface that induces an oriented alignment of gingival fibroblasts and mesenchymal stem cells, leading in turn to an improved expression of differentiation markers. This nanostructured surface could have a potential application in dental implants for an improved soft and hard tissue integration. 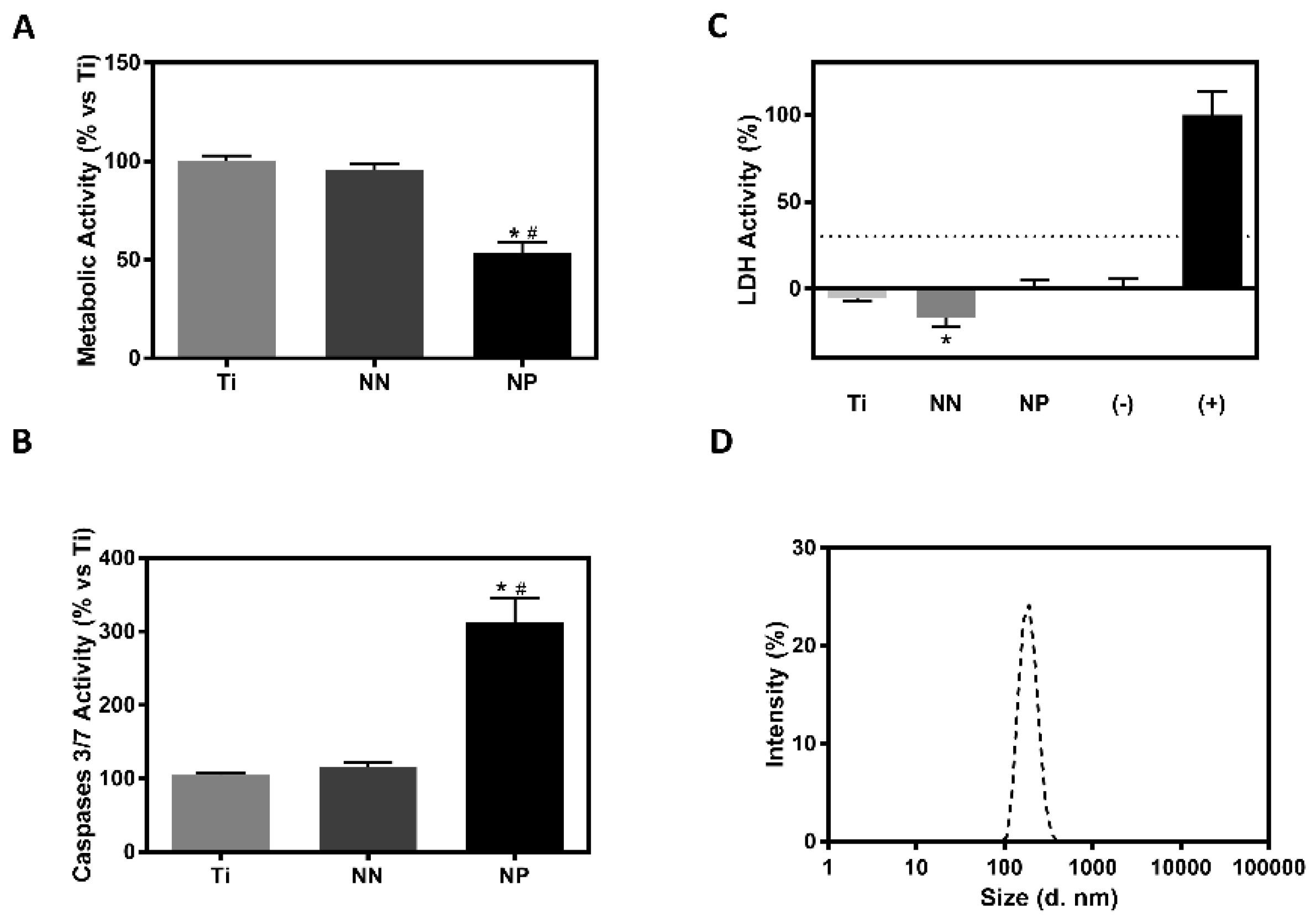 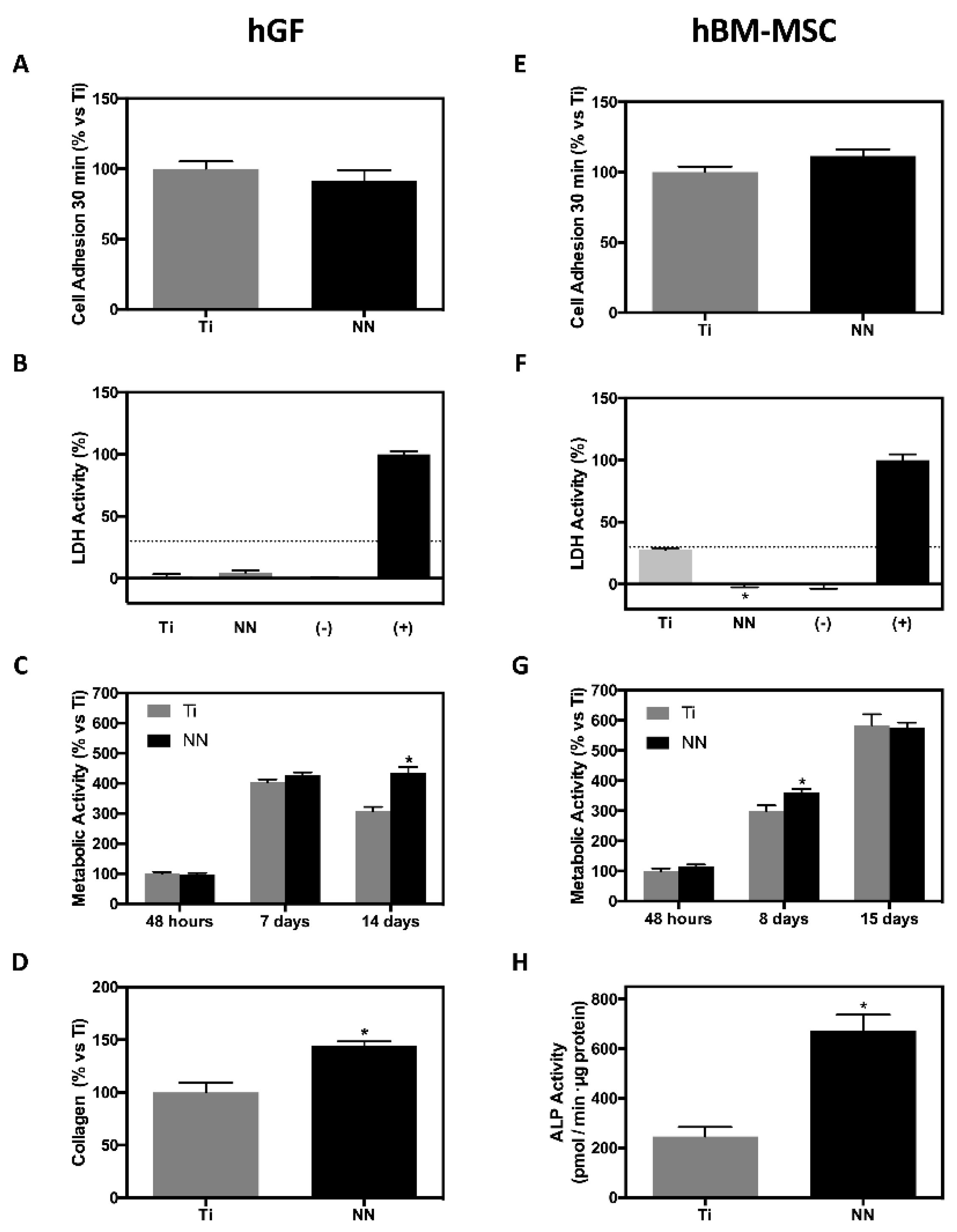 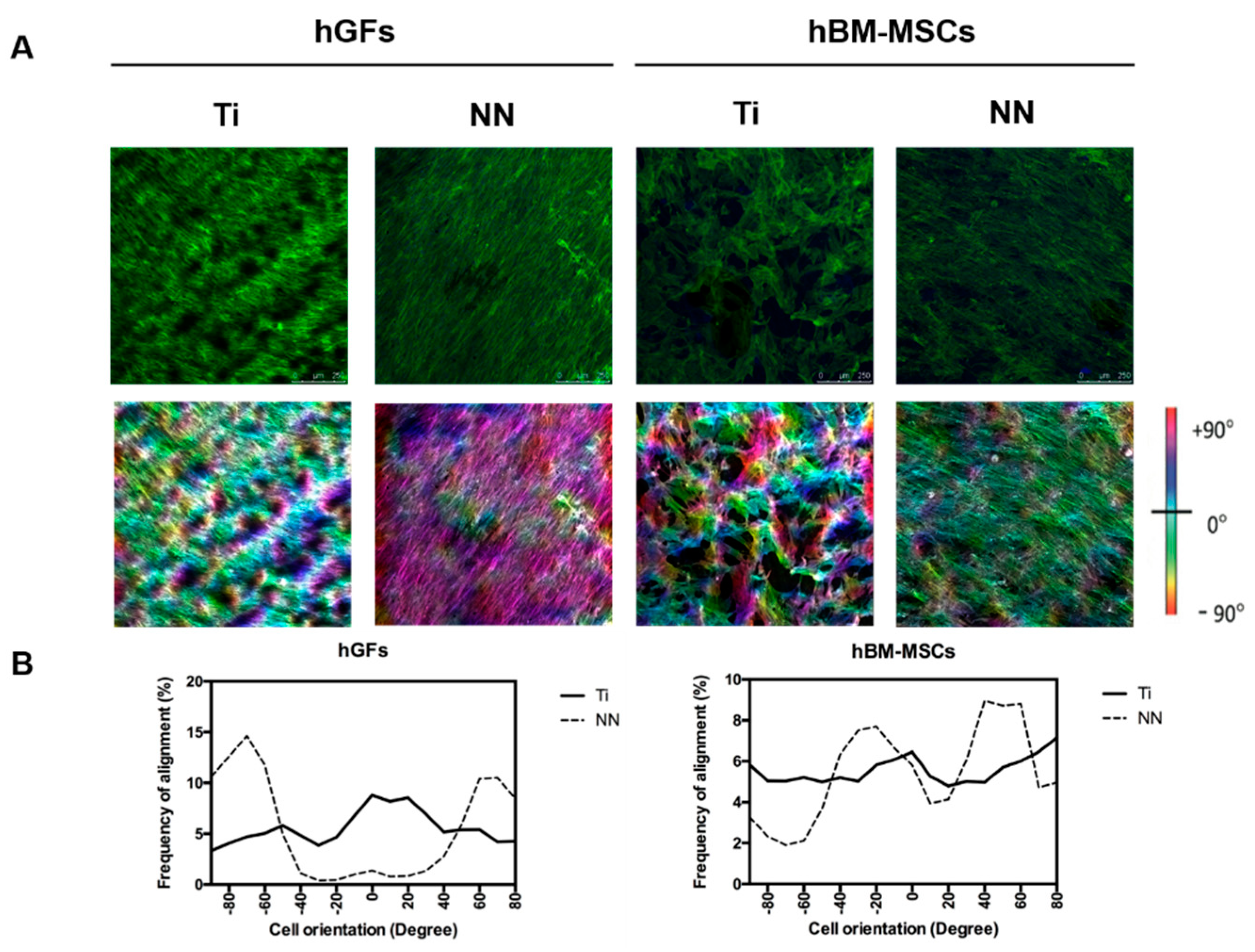