To encourage the applicability of nano-adsorbent materials for heavy metal ion removal from seawater and limit any potential side effects for marine organisms, an ecotoxicological evaluation based on a biological effect-based approach is presented. ZnCl2 (10 mg L−1) contaminated artificial seawater (ASW) was treated with newly developed eco-friendly cellulose-based nanosponges (CNS) (1.25 g L−1 for 2 h), and the cellular and tissue responses of marine mussel Mytilus galloprovincialis were measured before and after CNS treatment. A control group (ASW only) and a negative control group (CNS in ASW) were also tested. Methods: A significant recovery of Zn-induced damages in circulating immune and gill cells and mantle edges was observed in mussels exposed after CNS treatment. Genetic and chromosomal damages reversed to control levels in mussels’ gill cells (DNA integrity level, nuclear abnormalities and apoptotic cells) and hemocytes (micronuclei), in which a recovery of lysosomal membrane stability (LMS) was also observed. Damage to syphons, loss of cilia by mantle edge epithelial cells and an increase in mucous cells in ZnCl2-exposed mussels were absent in specimens after CNS treatment, in which the mantle histology resembled that of the controls. No effects were observed in mussels exposed to CNS alone. As further proof of CNS’ ability to remove Zn(II) from ASW, a significant reduction of >90% of Zn levels in ASW after CNS treatment was observed (from 6.006 to 0.510 mg L−1). Ecotoxicological evaluation confirmed the ability of CNS to remove Zn from ASW by showing a full recovery of Zn-induced toxicological responses to the levels of mussels exposed to ASW only (controls). An effect-based approach was thus proven to be useful in order to further support the environmentally safe (ecosafety) application of CNS for heavy metal removal from seawater. View Full-Text
Keywords: cellulose-based nanosponges; zinc; seawater; ecotoxicity; effect-based approach; remediation cellulose-based nanosponges; zinc; seawater; ecotoxicity; effect-based approach; remediation
►▼ Show Figures 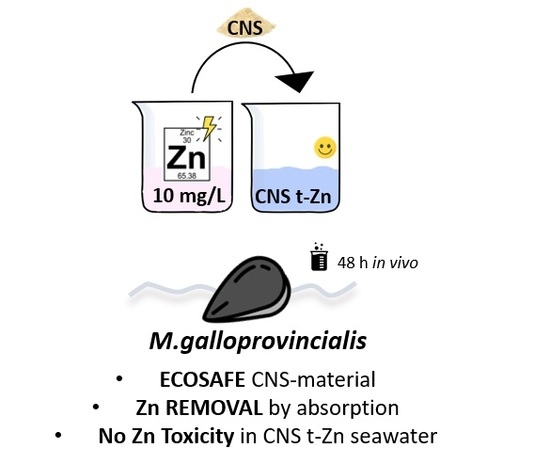