Thermoelectric generators convert heat to electricity without the need for moving parts, making them particularly maintenance efficient [1]. In transportation and energy production they can scavange waste heat, which otherwise accounts for 60% of primary energy expenditure [2]. Here, more effective thermal barrier materials maintain a larger heat gradient, thus improving their conversion rate. Therefore, a variety of techniques of thermal conductivity engineering are explored, such as composite generation [3], layer structure design [4] and nano-structuring [5]. As a common element in many of these techniques, additional interfaces partly impede heat flow [6]. For an appropriate choice of materials, they block a broad band of lattice vibrations [7], while electronic properties are maintained. However, the complex relationship between interface structure and thermal properties challenges both experimental and theoretical researchers. Depending on the materials vibrational spectra and interface topography, phonons scatter diffusely, thus randomizing their direction, reflect or transmit at an interface [8]. The ratio of these mechanisms determines the thermal resistance and is highly specific to material, temperature and growth conditions. Superlattices provide a valuable framework to study these effects with respect to their interface properties. They consist of a periodic arrangement of epitaxial layers that form a coherent crystal structure. They represent an effective design of thermal barriers for a wide variety of materials and are heavily interface dominated systems. Therefore any change of interface quality is expected to have a decisive effect on overall thermal properties.
In this study, TiNiSn/HfNiSn acts as a model system, because both constituents are important thermoelectric materials [9,10] and exhibit a high growth compatibility towards each other [11]. As Ti and Hf are isoelectronic, the combined TiNiSn/HfNiSn system exhibits little interface-related electronic perturbation [12]. The small electronic contribution to the heat transport in these semiconductors therefore does not depend on the superlattice structure [13]. However, as Hf and Ti have significantly different atomic masses, the interfaces of the composite potentially act as effective thermal barriers [14]. Additionally, because they are closely related compounds, they form a coherent crystal structure in cross-plane direction [15].

Main diffraction peaks confirm the (002)-growth direction with a rocking curve width around 0.6–1.0°, demonstrating consistent, epitaxial growth.
Figure 3 shows a XRD-pattern around the (002) main film peak of a 6 by 6 superlattice with 1 UC artificial intermixing. The fit by a homemade algorithm [27] extracts the period length. Additionally, for the smallest period length, a significant reduction in satellite intensity is visible. However, for longer period lengths this effect diminishes, as the intermixing layer goes down to only ∼12% of total layer volume.
The increased intermixing is separately validated in HR-STEM images. Figure 4 shows two samples, one pristine SL and a SL with a unit cell (UC) of an added TiHfNiSn interlayer. Both samples show clearly defined layers through the majority of the sample volume. The natural intermixing in pristine superlattices is typically around 0.3 nm, which can be estimated from a previous study [28]. In the second sample, TiHfNiSn has been deposited at every interface that corresponds to 0.6 nm leading to an effective broadening of the intermixing layer. Both predicted values are displayed as overlays in the corresponding images and agree well with the apparent broadening of the boundary layers. This verifies that the presented method produces SL model systems with similar period length and differing degrees of (artificial) intermixing.
Figure 5a displays their thermal resistivity (Km/W) as a function of period length d. Three sets of symbols indicate TiHfNiSn interlayers of 0, 0.5 and 1 UC, i.e., 0, 0.3 nm and 0.6 nm, respectively. The blue bars show the respective bulk resistivities of the constituent materials that were previously determined. While for long periods, the thermal resistivity corresponds to the mean of the bulk resistivities, it increases significantly for lower periods, i.e., higher interface densities. This increase demonstrates the dominance of interface and superlattice effects in this regime. The solid lines represent a fit based on where the material equivalent serves as the adjustable parameter. The fit extracts the effective contribution of a single set of interfaces to the thermal resistance as
In Figure 5b both interface and bulk-like contribution are displayed separately with the point being marked. At this point, interface and bulk-like effects contribute equally. In (c) the rocking curve-width of the measured samples is given as a proxy for crystal quality, demonstrating consistent growth over the sample series.
The extracted material equivalents and the corresponding effective thermal interface resistances are given in Table 2. In the half unit cell superlattices, a single interface corresponds to 3.8 nm additional material, which is 27% more compared to a pristine superlattice. In contrast, further increase of intermixing leads to material equivalent of only 2.3 nm, and thus a decrease of 23% as compared to the same reference.

The effective interface thermal resistance is directly correlated with the transmission function of phonons across an interface.
The theoretical transmission function, evaluated by Equation (13), is shown in Figure 6a for different values of p. As in most materials, the transmission is higher in the AMM-case. However, for this system the acoustic contrast is small compared to common model systems like Si-Ge or AlAs-GaAs, resulting in a transmission of over 95%.
The finite size terms for the fully specular and fully diffusive case are given in Figure 6b,c, respectively. They express the partial confinement by the incomplete transmission of phonons across the interfaces and are based on Equation (15) using the previously calculated . For the diffusive case, the maximum value of reaches 1.5, which corresponds to an additional 150% of bulk thermal resistivity resulting from phonon confinement. For a period length of 10 nm, the size term drops to a modification of only ∼9%. In the AMM case the modification does not exceed 4%, which is the result of the high transmission rate and the subsequent inefficient confinement.
The confinement effect together with the thermal boundary resistances give the effective interface thermal resistance per superlattice period which is given in Figure 7, separated into the distinct contributions.
In Figure 7a the thermal boundary resistance is shown, which is significantly higher in the diffusive ( Km/W) than in the specular case ( Km/W). As stated above, the same holds true for influence of the finite size term. Its effective contribution to the thermal resistance of a period, , is given in Figure 7b. As this value depends on the period length, three values are shown, a value corresponding to 1 nm, one for 10 nm and a value averaged over all period lengths. However, the contribution is roughly 2.5 times smaller than the TBR in the diffusive case and 17 times smaller in the specular case. Consequently, the thermal resistance of the superlattices are strongly dominated by the TBR-term (Figure 7c).
All investigated systems exhibit a low effective interface resistance, which indicates a high specularity and thus a comparatively high interface quality. Relative to the reference superlattice with no additional intermixing, the sample with a 0.5 UC interlayer exhibits a higher thermal resistance, which is expected for a lower interface definition. However, the 1 UC interlayer samples show lower thermal resistances, despite of the markedly lower interface quality revealed in the TEM-study. This effect is likely caused by the finite extension of the boundary layer, which can be comparable to the main layer thickness for small period length. Several non equilibrium molecular dynamics suggest that the intermixing layer, which naturally exhibits intermediate acoustic properties, can serve as a buffer [29,30], mediating phonon transmission. This mediating effect competes with the initial lowering of interface specularity by a thin intermixing layer. Consequently Yang et al. [31] find that moderate interface intermixing maximizes thermal resistivity in the simulation of a model superlattice, in agreement with our findings.

We have successfully manufactured thin film superlattice model systems with tunable intermixing and period length. An artificial intermixing layer modifies the interface quality for parts of the sample series: A 1:1 mixture of the main components deposited at the interface effectively extends the intermixing boundary layer. The thermal resistance was measured by a 3-method and analyzed by separating the interface and bulk-like contributions. The expected thermal boundary resistances are estimated using an analytical model based on a combination of acoustic mismatch model and diffusive mismatch model. We find that thin intermixing layers increase interfacial thermal resistance significantly, which is most likely caused by an uptake in diffuse scattering. However, for strongly increased intermixing, the thermal resistance decreases. As an explanation, a locally reduced acoustic contrast by the intermixing is considered, promoting interface transition of phonons [30].
We conclude that in nanostructures both effects have to be considered, especially for characteristic sizes lower than 2–4 nm, where interface effects dominate thermal transport. 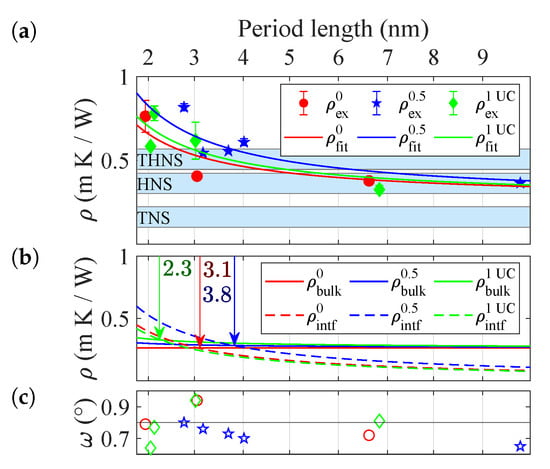