Medium-Term Artificial Intelligence and Society
Next Article in Special Issue

1
Department of Mathematical Economics, Saratov State University, Saratov 410012, Russia
2
Department of Finance and Credit, Saratov State University, Saratov 410012, Russia
3
Risk Institute, Saratov State University, Saratov 410012, Russia
*
Author to whom correspondence should be addressed.
†
The Fourth Workshop on Computer Modelling in Decision Making (CMDM 2019). The authorship of this work and the conference paper are different. The list of authors of this paper consists of only authors contributed to this particular work.
Information 2020, 11(6), 289; https://doi.org/10.3390/info11060289
Received: 15 April 2020 / Revised: 18 May 2020 / Accepted: 19 May 2020 / Published: 29 May 2020
(This article belongs to the Special Issue Computer Modelling in Decision Making (CMDM 2019))
View Full-Text Download PDF
Browse Figures
Review Reports Cite This Paper

In this article, we analyze the - and -convergence, using the data of the socio-economic development of Russian areas, and discover the role of spatial autocorrelation in regional economic development. We are considering 80 areas of the Russian Federation for the period of 2010–2017. Moran coefficients were used to estimate spatial autocorrelation. We compare the Moran scatterplots for GDP per capita and GDP growth rates per capita in 2017 and in 2014. We study the impact on raising investment in leading capital and the costs of technological innovation. We evaluate a wide range of specifications of spatial econometric models for all kinds of weight matrices. We combine standard geographical proximity with specialization proximity to assess whether they are substitutes or additions to converging economic growth rates. The weight matrix of the neighborhood and specialization similarities are used. The weight matrix of specialization similarities of the regional economies is based on data on the structure of tax payments in 82 industries. The specialization structure of the region’s economy is related to its location. Clusters obtained by matrices of specialization proximity are well separable from each other in space. The connectivity within clusters and the boundaries between them become more apparent over time. It is shown that according to the results of estimation of conditional -convergence models, the models of 2010–2014 and 2014–2017 differ significantly. There is a statistically significant -convergence for the period 2010–2014. There is also the presence of spatial autocorrelation. Based on the results of valuation models constructed from data after 2014, it can be concluded that the coefficient estimates for the explanatory variables are not significantly different from zero, and accordingly there is no tendency towards regional convergence in terms of economic development. The results obtained in the work are stable for the proposed models and spatial weight matrices. Territorial proximity is a more important factor than the similarity of specialization for explanation the economic growth rates of Russian regions. View Full-Text
Keywords: regional disparity; convergence; spatial autocorrelation; spatial econometrics; spatial spillovers regional disparity; convergence; spatial autocorrelation; spatial econometrics; spatial spillovers
►▼ Show Figures 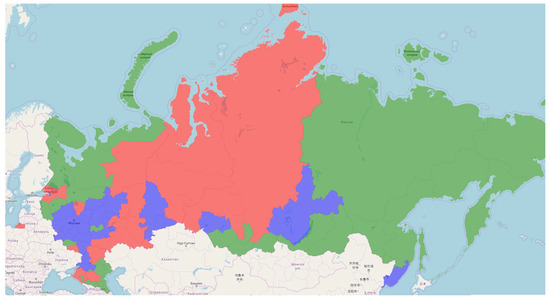