2. Frequencies and Mode Shapes of the Double-Beam System

The boundary stiffness is
The boundary conditions can be described as
Equation (18) becomes
Det [] = 0 results in the same equations as Equations (34) and (35), so the solutions of , and frequencies of the pinned-fixed double-beam systems are the same as the fixed-pinned double-beam systems. The mode shapes of the secondary beam of the pinned-fixed double beam systems are obtained by solving Equation (16) to be
The mode shapes of the primary beam can be worked out by Equation (22).

The boundary stiffness is
The boundary conditions are
Equation (18) becomes
Det [] = 0 results in or
Equations (44) and (45) are the same as that for a single beam with fixed-free boundary conditions. The solutions of the two equations are the same. If Equation (44) is chosen, the solutions of in the first six modes are as in Table 3.
Solving Equation (16) results in the mode shapes of the secondary beam
It can be found that Equation (46) is similar to Equation (21). The mode shapes of the primary beam can be worked out by Equation (22).

2.2. Verification of the Analytical Solutions in Section 2.1

To be concise, only the verifications for the frequencies and mode shapes of the fixed-fixed double-beam system are demonstrated in this section.
The material properties of the two beams are obtained from the rail and the bridge in the reference [2]. The properties of the bridge are: , , , . The properties of each rail are: , . The length of each rail is set to be the same as the bridge. In the discrete spring model, the contact stiffness of each spring underlying one rail is and the regular spacing between two neighboring contact springs is 0.625 m. In the distributed spring model, the contact stiffness under one rail is equivalent to be . In the 2D model, all the rail properties are doubled to account for the presence of both rails. The non-dimensional parameters are calculated to be: , and .
The discrete spring model for the rail-bridge system is established by the FE method and the numerical frequencies and mode shapes of the system are obtained. They are compared with the analytical counterparts calculated from the formulae for the distributed spring model in Section 2.1. The rail and the bridge are modeled by 256 beam elements in the FE model. 31 discrete spring elements having the stiffness of N/m and the space of 0.625 m are created to model the discrete springs. The first 16 frequencies of the double-beam system are obtained by the FE method and compared with the analytical results as shown in Table 4. The differences between the two kinds of results are very small. To save page, only the first 8 mode shapes are depicted for comparison in Figure 2. The differences between the mode shapes obtained by the two methods cannot be distinguished. The above comparisons verify the analytical formulae in Section 2.1. It is interesting to find that the 5th mode shape is similar to the 1st except that the amplitude and direction of the bridge mode shape are different. The similarities can also be found between the 6th and the 2nd, the 7th and the 3rd and the 8th and the 4th mode shapes. In fact, the two similar modes are the two sub-modes corresponding to the same basic mode with the same wavenumber. The four sets of similar modes are corresponding to the first four basic modes. More studies about sub-modes are presented in Section 2.3.

The vibrations of the double-beam system with five general kinds of symmetric boundary conditions subjected to a moving force are studied in this section. The force is considered to move at a constant speed of on the primary beam, as shown in Figure 11.

The equations of motion of the secondary beam and the primary beam can be expressed as
The sum of Equations (49) and (50) is
Applying the MS method to Equation (51), one can obtain the following ordinary differential equation regarding modal coordinates [42,43] where

It is found in Section 2.1 that the mode shapes of the double beam system for fixed-fixed boundary conditions have the same mathematical formulae as those for fixed-pinned boundary conditions except that the values of are different, so the solutions of Equation (52) would have the same formulae for the two kinds of boundary conditions except the values of . The following derivations are based on double-beam systems with fixed-fixed boundary conditions.
Substituting Equations (21) and (22) into Equation (53) and setting C to be one result in where and and are obtained from Equations (9) and (11), respectively.
Substituting Equation (22) into Equation (52) and setting C to be one result in where
The solution of Equation (56) is where
The displacements of the primary beam and the secondary beam are where m is the number of basic modes used in the MS method.
To conduct parametric studies in Section 3.3, two dimensionless displacements for the primary beam and the secondary beam are defined as follows where represents the location where maximum static deflection takes place; is the maximum static deflection of a single secondary beam with the same boundary conditions as the double-beam loaded by a concentrated force at of the single beam and is a dimensionless time
For a fixed-fixed beam, and is
For a fixed-pinned beam, and ws is
The speed ratio is defined as where is the critical speed at which the single secondary beam is excited into resonance in the first mode by the moving force and the first frequency of the single secondary beam can be obtained by

3.2. Verification of the Analytical Solutions in Section 3.1

An example of the double-beam system with two identical beams () subjected to a moving force is used firstly to verify the analytical solutions in Section 3.1. To be concise, only the formulae for fixed-fixed and pinned-pinned boundary conditions are verified.

The Newmark-Beta integration method is adopted to obtain numerical solutions of Equation (52) and compared with its analytical solutions. It is found in computations that using only the first basic mode (m = 1) is good enough to reach satisfied accuracies for the fixed-fixed double-beam system. For comparison, only the first basic mode is used in the following analyses for other kinds of boundary conditions. Figure 12 shows the comparisons between the results by the two methods for the dimensionless speed () of 0.5 and contact stiffness ratios () of 10 and 100. It can be seen from the figure that the two kinds of results have very good agreements. In addition, it can be found that the maximum displacement of the secondary beam () is smaller than that of the primary beam () and the instants for lag behind those for . When becomes larger, the difference between and is smaller.

The obtained analytical results by MS method are compared with those by the Equation Decoupled (ED) method in Reference [19]. Figure 13 shows the comparisons between the results by the two methods for the dimensionless speed (α) of 0.5 and contact stiffness ratio () of 10 and 100. The two groups of results agree with each other very well. It can also be seen from the figure that the difference between and becomes smaller with the increase of . More detailed study about the relationship between and will be shown in Section 3.3.

Figure 15 shows maximum dimensionless displacements () and () versus the contact stiffness ratio () for different boundary conditions when , and . Several characteristics can be found from the figure:

Figure 16 shows maximum dimensionless displacements () and () versus the mass ratio () for different boundary conditions when , and . It can be seen from the figure that increases firstly and then decreases with . In addition, the difference between and is smaller for looser boundary conditions.

The vibrations of the double-beam system with five general kinds of symmetric boundary conditions traversed by a moving force are studied analytically by using the Modal Superposition (MS) method in this paper. Main conclusions can be drawn as below:

All the authors contribute to the research. H.J. and H.W. did part of the theoretical work. J.Y. and S.T. finished the theoretical and numerical work and wrote up the manuscript. X.H. and J.Y. are the receivers of the funding and managed the projects.

The authors declare no conflict of interest. The founding sponsors had no role in the design of the study; in the collection, analyses or interpretation of data; in the writing of the manuscript; or in the decision to publish the results. 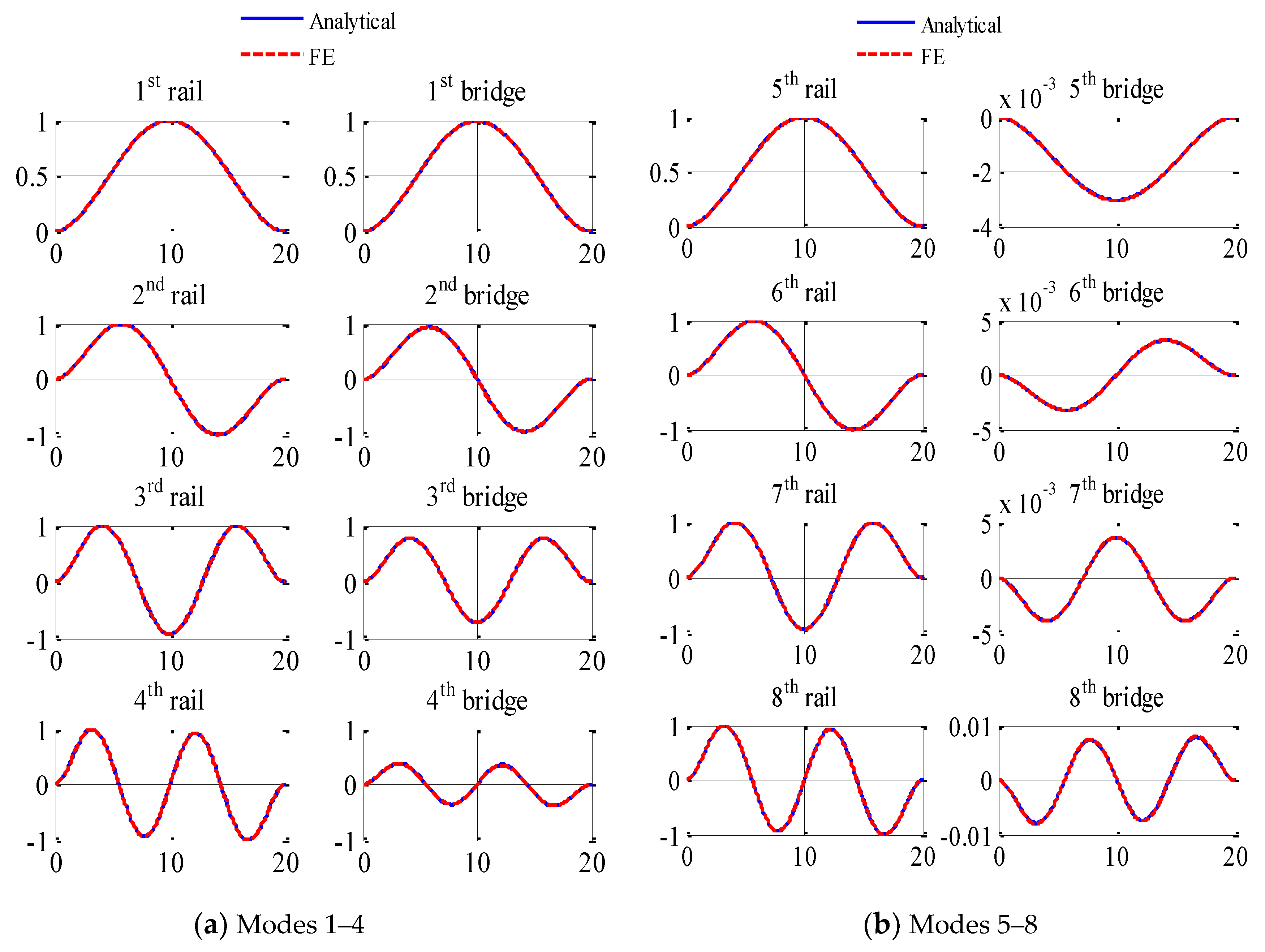 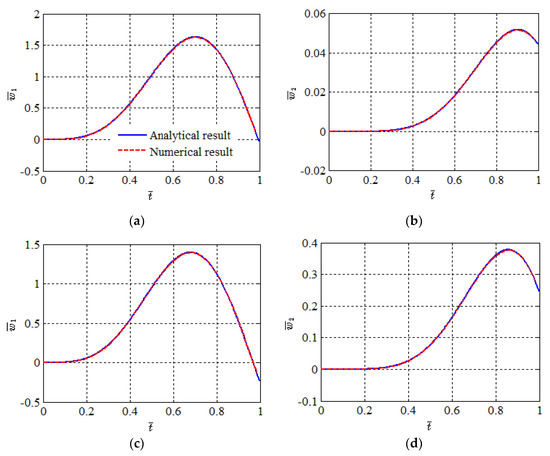 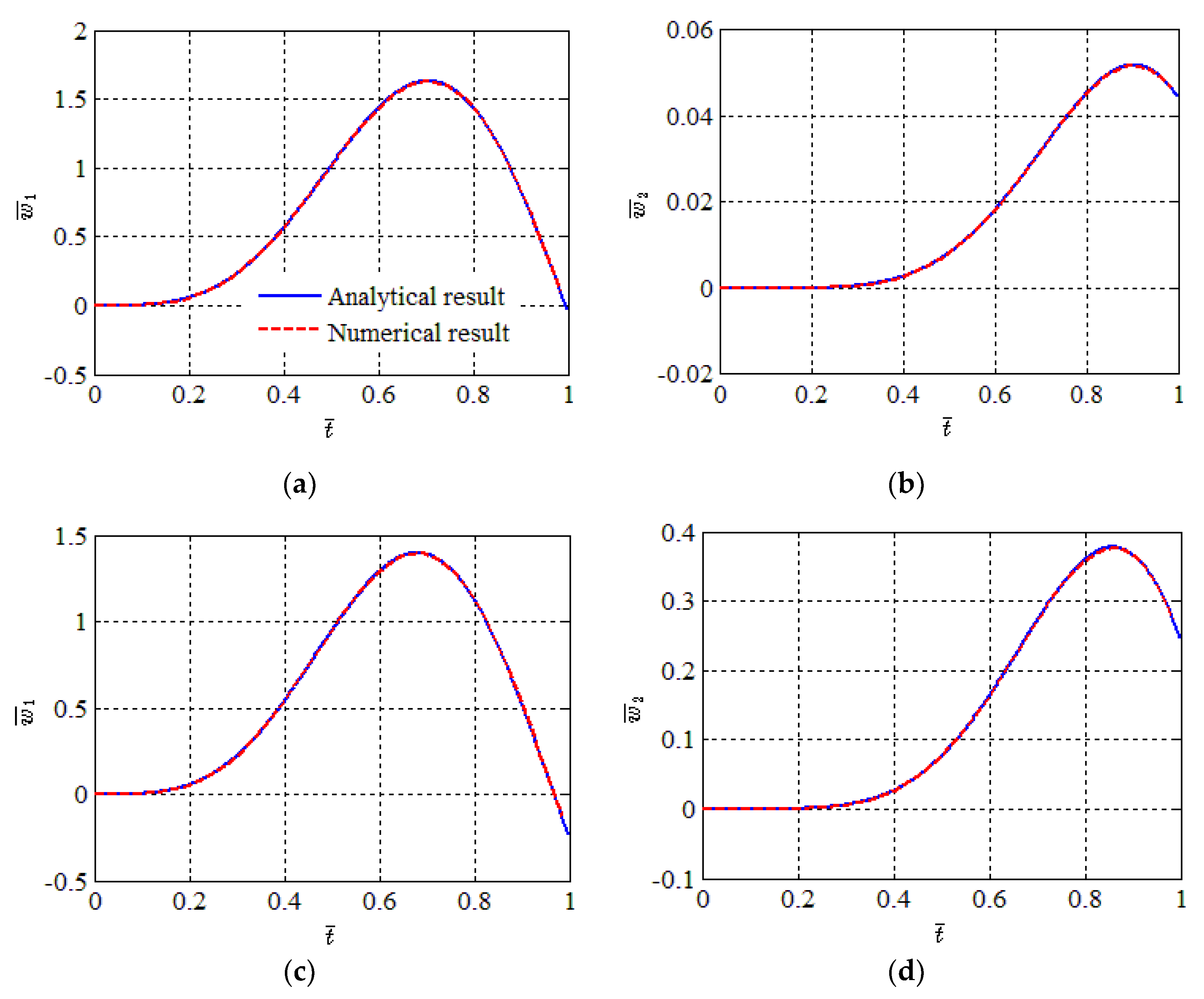