Techno-Economic Analysis of a Novel Hydrogen-Based Hybrid Renewable Energy System for Both Grid-Tied and Off-Grid Power Supply in Japan: The Case of Fukushima Prefecture
Next Article in Special Issue

“CP in yogurt” and “CP in water” were prepared by dissolving CP (10 g) in yogurt (50 g) and water (200 mL), respectively. “Yogurt-fermented CP” was prepared by adding 10 g of CP to a mixture of milk (45 g) and yogurt (5 g), followed by incubation at 40 ℃ overnight. The prepared CP samples that were used as test foods in the human study are shown in Table 1.

2.3. Analysis of Hyp-Containing Di- or Tripeptides in CP Test Foods

The human study was performed according to the guidelines proposed in the Helsinki Declaration, and it was approved by the Ethical Committee of Tokyo Kasei University (certificate number H29-20 Tokyo, Japan). No negative effects were reported for CP ingestion at 5–10 g/day for 12 weeks in human studies [20,21], and the safety of high-dose CP ingestion (1.66 g/kg body weight) was also confirmed by animal experiments [22]. Four healthy female volunteers (aged 20–24 years) were recruited after obtaining informed consent. After 12 h of fasting, the participants ingested the CP test foods. Venous blood was collected in heparin tubes from the cubital veins of the study subjects before and 1, 2, and 4 h after the ingestion. The human studies were conducted with a washout period of 1 week between each ingestion of CP. A schematic representation of the study design is presented in Figure 1.
Isolated plasma was diluted in ethanol (3× volume). Plasma proteins were removed by centrifugation at 3000 rpm for 10 min at 5 ℃, and the supernatants were stored at −80 ℃ until analysis.

2.5. Quantitation of Hyp and Hyp-Containing Di- or Tripeptides in Human Plasma

The concentration of Hyp-containing di- or tripeptides in the plasma of each subject was quantitated using a recently reported LC-MS method with a mixture of stable isotope-labeled internal standard peptides, called SI-oligo [14]. An aliquot of the ethanol-soluble fraction of plasma samples was mixed with SI-oligo and then dried using a CVE-3100 centrifugal evaporator (EYELA, Tokyo, Japan). The samples were reconstituted with 0.1 % formic acid, and the Hyp-containing peptides were analyzed by LC-MS in MRM mode, as described above. The concentration of each peptide was calculated based on the peak area ratio of non-labeled analytes relative to that of the corresponding stable isotopically labeled analytes derived from SI-oligo [14]. The area under the plasma concentration–time curve (AUC) was calculated using the trapezoidal rule.

3.1. Detection of Di- and Tripeptides and Cyclic Peptides Derived from CP after Yogurt Fermentation

3.2. Detection of Food-Derived Hyp-Containing Peptides in Human Blood after Ingestion of CP with or without Yogurt Fermentation

Clearly, the present study has revealed that the co-ingestion of CP and yogurt can significantly increase the absorption of Hyp-containing peptides into plasma. Therefore, the supplementation of food sources with CP should be considered in order to take advantage of the beneficial effects of CP byproducts on human health, particularly in the context of skin, joint, and muscle disorders. We demonstrated that lactic acid bacteria in yogurt could produce short chain Hyp-containing peptides from CP in “yogurt-fermented CP” samples and that yogurt enhanced the levels of CP-derived peptides in human blood. However, peptide absorption after the ingestion of the CP test foods was more affected by the bioactive peptides present in yogurt than by their molecular size. Follow-up studies are required in order to clarify the effects of PepX, BCM, and DPP-IV inhibitors in yogurt, as well as different lactic acid bacteria on peptide absorption. Additionally, an advanced human study with a large number of subjects is also needed for an accurate investigation regarding the mechanisms behind the effects of food matrices on peptide absorption in humans. Further studies on the detection of bioactive peptides in yogurt that promote peptide absorption into human blood are in progress.

We are grateful to the referees for useful comments. 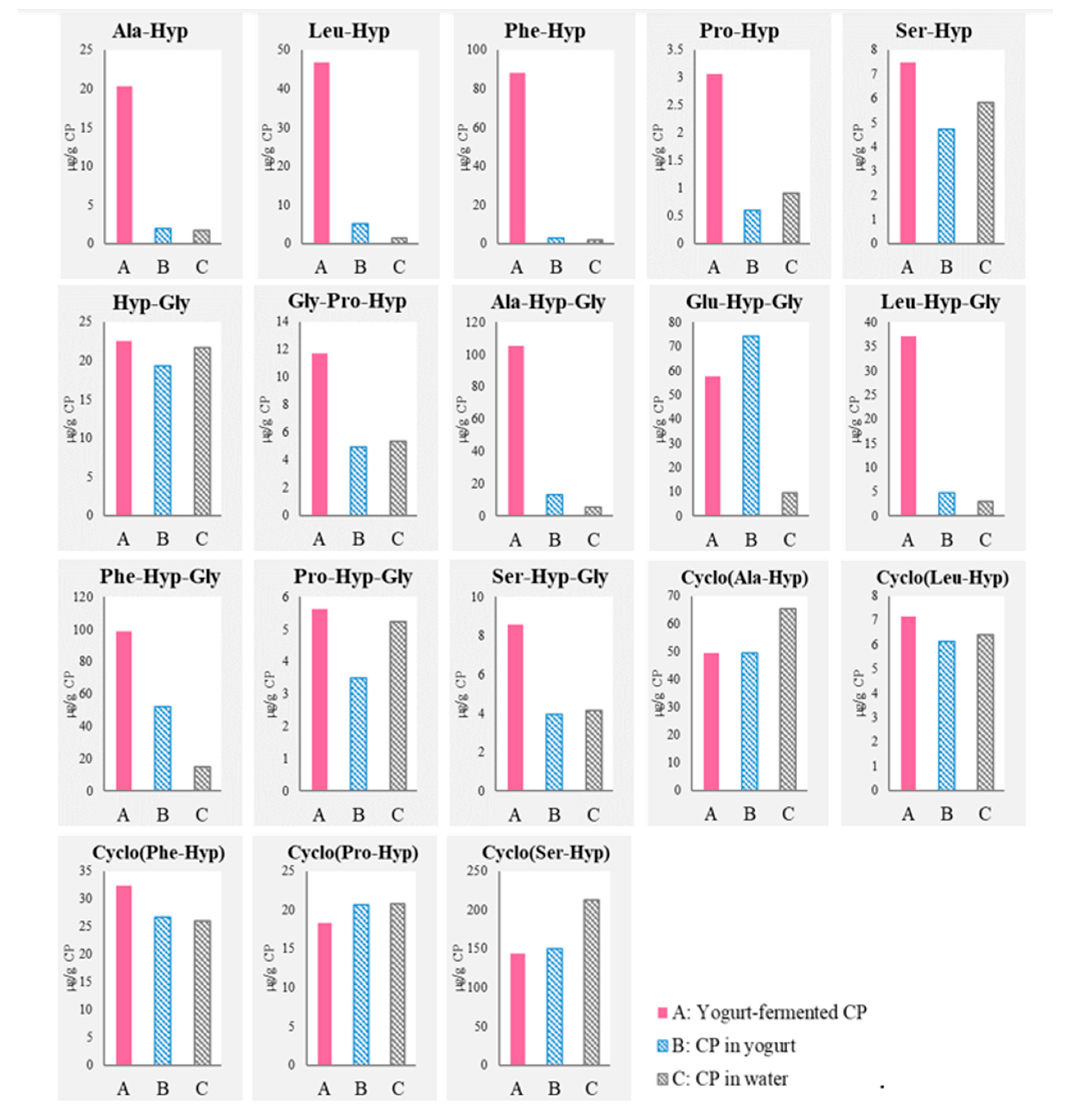 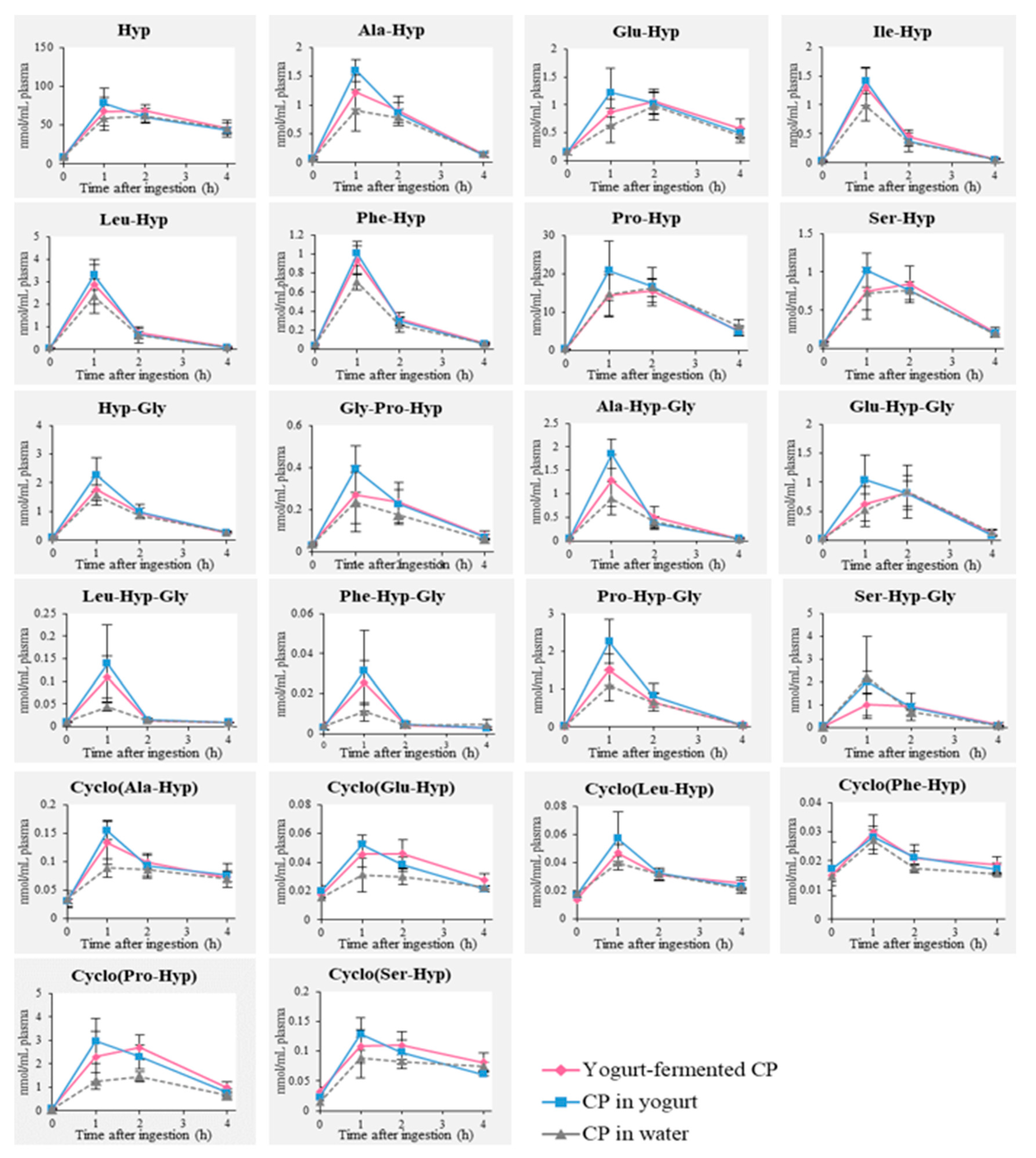