This work studied the effect of dairy cow ration supplementation with inorganic plus organic Se on metabolic status, milk yield, and the quality of milk and dairy products, especially its Se content. Twenty multiparous Holstein Friesian lactating cows were assigned to two feeding treatments. The cows were fed with 22.5 kg dry matter (DM) of total mixed ration (11.75 kg DM of forage plus 10.75 kg DM of concentrate) by head. There were two different concentrates with the same Se content (0.240 mg/kg of ration DM) but with different Se sources: The control (CON) was supplemented with inorganic Se (sodium selenite); and the other (IOSe) was supplemented with sodium selenite plus organic Se (Sel-Plex®), at 0.144 and 0.096 mg Se/kg of ration DM, respectively. The results indicated that, in general, the IOSe treatment did not modify the metabolic profile, and even decreased the total oxidant status (p < 0.05) and did not lead to a deterioration of quality and yield of milk. However, milk and cheese from IOSe had higher Se content (an increase of 29.7% and 38.2%, respectively) than CON (p < 0.01), but this effect was not observed in yogurt. In general, physical or sensorial parameters of cheeses did not show differences between treatments. Moderate inorganic plus organic Se supplementation may be more effective than inorganic Se, increasing the Se content in milk and cheese, without causing a deterioration in quality or productive parameters. View Full-Text
Keywords: organic selenium; feed additive; milk; dairy organic selenium; feed additive; milk; dairy
►▼ Show Figures 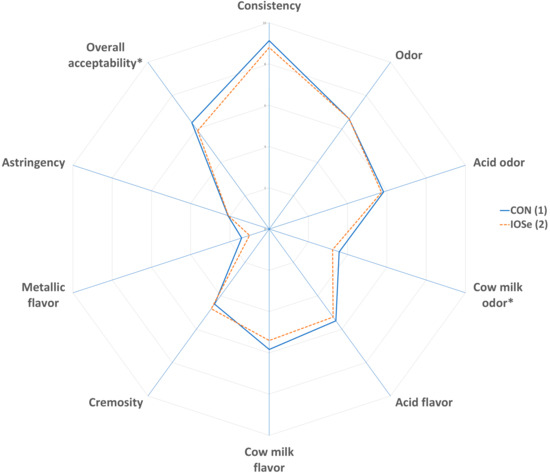