Viruses Like Sugars: How to Assess Glycan Involvement in Viral Attachment
Previous Article in Special Issue

Adhesion to intestinal mucus is the first step for microbiota colonization in early life. Polyamines are polycations with important physiological functions in both procaryotic and eucaryotic cells. However, their role in intestinal mucus adhesion is not known. The objective of the present study was to evaluate whether exogenous polyamines (putrescine, spermidine, spermine, and their combination) would alter the adhesive properties of Lacticaseibacillus rhamnosus GG (LGG), Bifidobacterium animalis subs. lactis Bb12, Cronobacter sakazakii, and Escherichia coli. Human intestinal mucus was isolated from healthy infants (0–6-month-old and 6–12-month-old) and healthy adults (25–52 years old). Spermidine significantly increased Bb12 adhesion (p < 0.05) in the mucus of infants (0–6 months) but reduced the adhesion of LGG in adult mucus (p < 0.05) with no significant effect in any of the infant groups. Spermine was more effective than polyamine combinations in reducing C. sakazakii (p < 0.05) adhesion in early infant mucus (0–6 months). The adhesion ability of E. coli remained unaffected by exogenous polyamines at any age in the concentrations tested. Our data suggest that polyamines may modulate the bacterial adhesion to mucus depending on the bacterial strain and depending at what age the mucus has been generated. View Full-Text
Keywords: Bifidobacterium; Lacticaseibacillus rhamnosus; Cronobacter; putrescine; spermidine; spermine; polyamines Bifidobacterium; Lacticaseibacillus rhamnosus; Cronobacter; putrescine; spermidine; spermine; polyamines
►▼ Show Figures 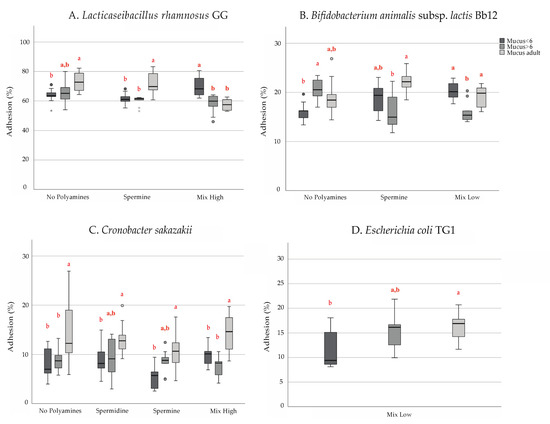