This study was performed to explore the predominant responses of rumen microbiota with thymol supplementation as well as effective dose of thymol on rumen fermentation. Thymol at different concentrations, i.e., 0, 100 mg/L, 200 mg/L, and 400 mg/L (four groups × five replications) was applied for 24 h of fermentation in a rumen fluid incubation system. Illumina MiSeq sequencing was applied to investigate the ruminal microbes in addition to the examination of rumen fermentation. Thymol doses reached 200 mg/L and significantly decreased (p < 0.05) total gas production (TGP) and methane production; the production of total volatile fatty acids (VFA), propionate, and ammonia nitrogen, and the digestibility of dry matter and organic matter were apparently decreased (p < 0.05) when the thymol dose reached 400 mg/L. A thymol dose of 200 mg/L significantly affected (p < 0.05) the relative abundance of 14 genera of bacteria, three species of archaea, and two genera of protozoa. Network analysis showed that bacteria, archaea, and protozoa significantly correlated with methane production and VFA production. This study indicates an optimal dose of thymol at 200 mg/L to facilitate rumen fermentation, the critical roles of bacteria in rumen fermentation, and their interactions with the archaea and protozoa. View Full-Text
Keywords: thymol; rumen fermentation; rumen microbiota; goats thymol; rumen fermentation; rumen microbiota; goats
►▼ Show Figures 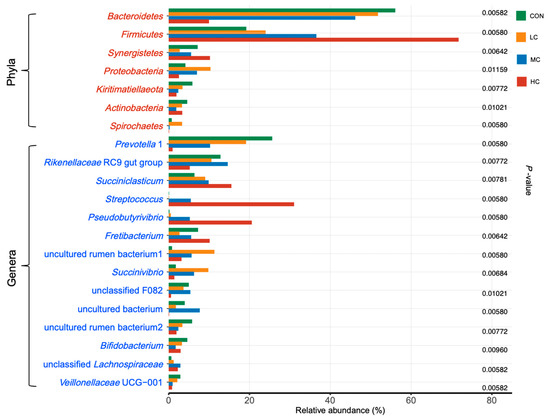