Identification and Toxigenic Potential of Fungi Isolated from Capsicum Peppers

Green mold disease, a common citrus post-harvest disease caused by Penicillium digitatum, has an unresolved initial infection mechanism. Understanding the infection mechanism leads to the development of potential controls and preventive measures against the disease. The present study aimed to delineate the infection mechanism by investigating spore germination, changes of organic molecules and enzyme activity, and differential expression of genes in the P. digitatum infection. P. digitatum spore germination was observed by a pathology section scanner and it was found that in vivo germination was 3 h behind the in vitro germination. In addition, cell wall degrading enzymes and soluble sugar and titratable acid content during the infection process measured dynamically. The level of pectinase reached its maximum of 6067 U/g before 48 hpi, while cellulase increased rapidly after 48 hpi. The soluble sugar and organic acid content increased considerably with the progression of the infection. The transcriptomic profile of P. digitatum before and after infection was analyzed by RNA-seq. The genes related to cell wall degrading enzymes were significantly up-regulated and annotated to participate in two major carbon source synthesis pathways. The study delineated the initial infection mechanism of P. digitatum which eventually opened the gate way for the development of new control strategies in the future. View Full-Text
Keywords: Penicillium digitatum; citrus; initial process; cell wall degrading enzyme; RNA-seq Penicillium digitatum; citrus; initial process; cell wall degrading enzyme; RNA-seq
►▼ Show Figures 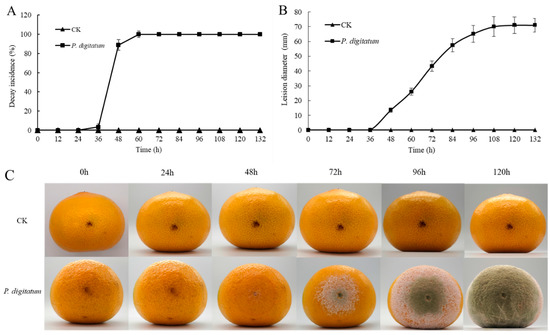