Deadly pathogens and parasites are transmitted by vectors and the mosquito is considered the most threatening vector in public health, transmitting these pathogens to humans and animals. We are currently witnessing the emergence/resurgence in new regions/populations of the most important mosquito-borne diseases, such as arboviruses and malaria. This resurgence may be the consequence of numerous complex parameters, but the major cause remains the mismanagement of insecticide use and the emergence of resistance. Biological control programmes have rendered promising results but several highly effective techniques, such as genetic manipulation, remain insufficiently considered as a control mechanism. Currently, new strategies based on attractive toxic sugar baits and new agents, such as Wolbachia and Asaia, are being intensively studied for potential use as alternatives to chemicals. Research into new insecticides, Insect Growth Regulators, and repellent compounds is pressing, and the improvement of biological strategies may provide key solutions to prevent outbreaks, decrease the danger to at-risk populations, and mitigate resistance. View Full-Text
Keywords: mosquito-borne disease; pest control; insecticide resistance; biological control; paratransgenesis; Wolbachia; Asaia; Bacillus mosquito-borne disease; pest control; insecticide resistance; biological control; paratransgenesis; Wolbachia; Asaia; Bacillus
►▼ Show Figures 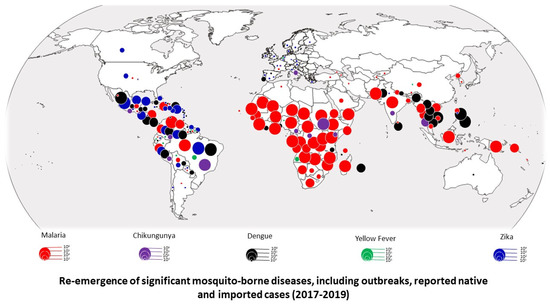 
Dahmana, Handi; Mediannikov, Oleg. 2020. "Mosquito-Borne Diseases Emergence/Resurgence and How to Effectively Control It Biologically." Pathogens 9, no. 4: 310.