The Infectious Pancreatic Necrosis Virus (IPNV) and its Virulence Determinants: What is Known and What Should be Known
Previous Article in Journal

Infectious hematopoietic necrosis virus (IHNV), one of the most important pathogenic fish viruses, affects trout fisheries and causes considerable economic losses. Currently, in Korea, more studies on IHNV infection are being reported. However, relatively less data is available on Korean isolates than on those from other countries. Few studies have focused on gene sequence analyses of IHNV glycoprotein (G) gene and almost none have focused on other gene fragments. Therefore, considering the dearth of adequate phylogenetic and genomic studies on Korean IHNV strains because of the lack of data, our study aimed to provide sufficient relevant data by sequencing the complete genome of the IHNV strain SNU1, which was recently isolated from a Korean rainbow trout farm. Moreover, we focused on expanding the perspectives on the phylogenesis of IHNV isolates from Korea and other Asian countries. IHNV was isolated from pooled hematopoietic tissue samples using Epithelioma papulosum cyprinid (EPC) cells, and phylogenetic analysis and genome study were conducted using complete G, N, and nonvirion (NV) gene sequences. Our main achievements were the development of a phylogenetic analytical method based on the NV gene and complete genome sequence analysis of the IHNV strain SNU1, which was compared with other Asian isolate sequences. View Full-Text
Keywords: IHNV; Korean isolates; phylogenetic analysis; genome sequencing; trout fisheries IHNV; Korean isolates; phylogenetic analysis; genome sequencing; trout fisheries
►▼ Show Figures 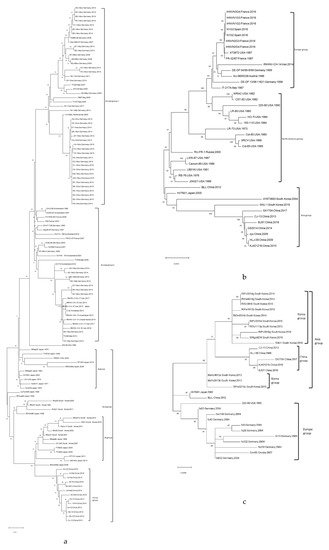