Prevalence, Antimicrobial Resistance, and Diversity of Salmonella along the Pig Production Chain in Southern Brazil
Previous Article in Journal

Dual Transcriptional Profile of Aspergillus flavus during Co-Culture with Listeria monocytogenes and Aflatoxin B1 Production: A Pathogen–Pathogen Interaction

The objective of this study was to investigate the effect of growth temperature and co-culture of Aspergillus flavus with Listeria monocytogenes on the production of Aflatoxin B1 (AFB1) and the transcriptional profile of associated regulatory and biosynthetic genes. The transcription of virulence- and homeostasis-associated genes of L. monocytogenes was also assessed. For this purpose, mono- and co-cultures of L. monocytogenes strain LQC 15257 and A. flavus strain 18.4 were inoculated into Malt Extract broth and allowed to grow for seven days at 25 °C and 30 °C. AFB1 quantification was performed by HPLC analysis and gene expression assessment by RT-qPCR. AFB1 production was lower at 30 °C compared to 25 °C during monoculture and also lower during co-cultures at both temperatures. This was accompanied by downregulation of aflM, aflR, aflP, and aflS during monoculture and aflM and aflS during co-culture at 30 °C. On the other hand, transcription of prfA, plcA, plcB, inlA, inlB, inlJ, murE, accA, acpP, as well as fapR, was not affected. sigB gene was downregulated after co-culture with the fungus at 25 °C and hly was downregulated after monoculture at 30 °C compared to 25 °C. In this work, the molecular interactions between A. flavus and L. monocytogenes were studied for the first time, offering a novel insight into their co-occurrence. Monitoring of their toxigenic and virulence potential at the molecular level revealed a complex dynamic in natural ecosystems. View Full-Text
Keywords: Listeria monocytogenes; Aspergillus flavus; interaction; gene expression; Aflatoxins Listeria monocytogenes; Aspergillus flavus; interaction; gene expression; Aflatoxins
►▼ Show Figures 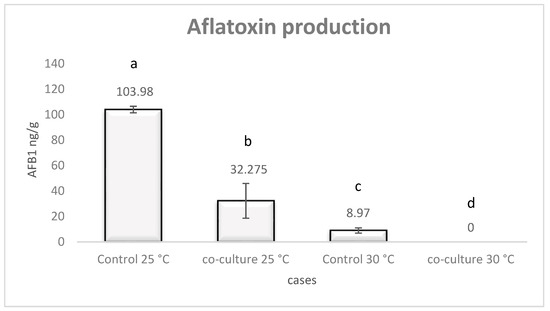