Israeli-Ness or Israeli-Less? How Israeli Women Artists from FSU Deal with the Place and Role of “Israeli-Ness” in the Era of Transnationalism

Monsters of Military Might: Elephants in Hellenistic History and Art†

1
Department of History, University of Groningen, 9712 EK Groningen, The Netherlands
2
Formerly Allard Pierson Museum, University of Amsterdam, 1012 GC Amsterdam, The Netherlands
†
Dedicated in friendship to Robert A. Lunsingh Scheurleer. An earlier version of this article was presented at the “The Living World of Animals in Antiquity” panel, organized by Sian Lewis and Lloyd Llewellyn-Jones, at the VIII th Celtic Conference in Classics held at the University of Edinburgh (25–28 June 2014). A preliminary summary has been published by the author in the Ancient History Encyclopedia (2019).
Arts 2019, 8(4), 160; https://doi.org/10.3390/arts8040160
Received: 16 October 2019 / Revised: 25 November 2019 / Accepted: 26 November 2019 / Published: 4 December 2019
(This article belongs to the Special Issue Animals in Ancient Material Cultures (vol. 1))
View Full-Text Download PDF
Browse Figures
Cite This Paper

Elephants were first deployed in warfare by Indian and Persian armies. The Greco-Macedonian troops first encountered these fearsome creatures in battle during the campaign of Alexander the Great. Subsequently, the Successors and later Hellenistic rulers similarly used elephants in battle. From this time, the animal began to appear in Greco-Roman art. Tracing the appearance of the elephant in Hellenistic history and art, I suggest that the elephant not only continued to be associated with its Asian and African origins and came to symbolize military triumph over exotic foes, it retained religious and mythic proportions as a fearsome, fabulous monster connected with the martichora and unicorn, griffon and sphinx, dragon and hippocampus. In particular, I re-examined the posthumous portrait of Alexander the Great in which he wears an elephant scalp as a headdress, similar to Heracles’ lion scalp. This deified portraiture not only depicts Alexander as descendant of Heracles and Dionysus, both sons of Zeus, but also—through connections with Ammon and Indra—as the legitimate ruler of the three continents of the known world, Europe, Africa, and Asia. View Full-Text
Keywords: elephants; animals; mythic monsters; Hellenistic history; art history; military history; ideology; Alexander the Great elephants; animals; mythic monsters; Hellenistic history; art history; military history; ideology; Alexander the Great
►▼ Show Figures 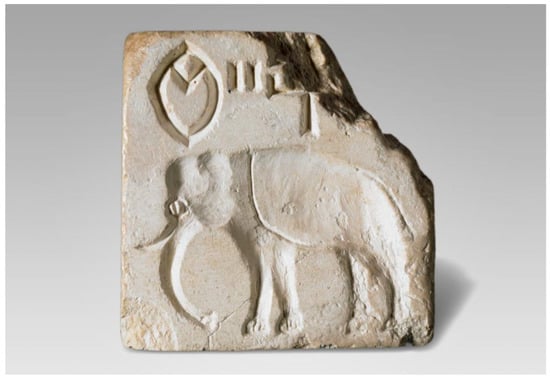