Consolidation of contextual memories after a stressful encounter is essential for the survival of an organism and in allowing a more appropriate response to be elicited should the perceived threat reoccur. Recent evidence has explored the complex role that epigenetic mechanisms play in the formation of such memories, and the underlying signaling pathways are becoming more apparent. The glucocorticoid receptor (GR) has been shown to play a key role in these events having both genomic and non-genomic actions in the brain. GR has been shown to interact with the extracellular signal-regulated kinase mitogen-activated protein kinase (ERK MAPK) signaling pathway which, in concert, drives epigenetic modifications and chromatin remodeling, resulting in gene induction and memory consolidation. Evidence indicates that stressful events can have an effect on the offspring in utero, and that epigenetic marks altered early in life may persist into adulthood. A new and controversial area of research, however, suggests that epigenetic modifications could be inherited through the germline, a concept known as transgenerational epigenetics. This review explores the role that epigenetic processes play in the central nervous system, specifically in the consolidation of stress-induced memories, the concept of transgenerational epigenetic inheritance, and the potential role of epigenetics in revolutionizing the treatment of stress-related disorders through the emerging field of pharmacoepigenetics and personalized medical treatment. View Full-Text
Keywords: epigenetics; cognition; glucocorticoid hormone; stress; memory; learning; hippocampus; glucocorticoid receptor; mineralocorticoid receptor; immediate-early gene epigenetics; cognition; glucocorticoid hormone; stress; memory; learning; hippocampus; glucocorticoid receptor; mineralocorticoid receptor; immediate-early gene
►▼ Show Figures 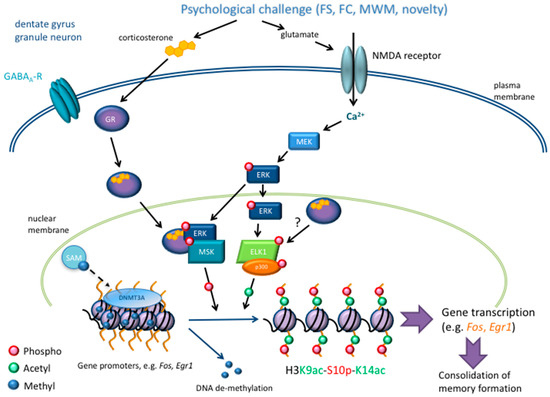