Manal A. Adam
and

The gene EHMT1 that encodes the Euchromatic Histone Methyltransferase-1, also known as GLP (G9a-like protein), has been associated with a number of neurodevelopmental and neurodegenerative disorders. GLP is a member of the euchromatic lysine histone methyltransferase family, along with EHMT2 or G9A. As its name implies, Ehmt1/GLP is involved in the addition of methyl groups to histone H3 lysine 9, a generally repressive mark linked to classical epigenetic process such as genomic imprinting, X-inactivation, and heterochromatin formation. However, GLP also plays both a direct and indirect role in regulating DNA-methylation. Here, we discuss what is currently known about the biochemical function of Ehmt1/GLP and its association, via various genetic studies, with brain disorders. View Full-Text
Keywords: Ehmt1/GLP; G9a; histone methyltransferase; DNA methylation; neurodevelopment; neurodegeneration Ehmt1/GLP; G9a; histone methyltransferase; DNA methylation; neurodevelopment; neurodegeneration
►▼ Show Figures 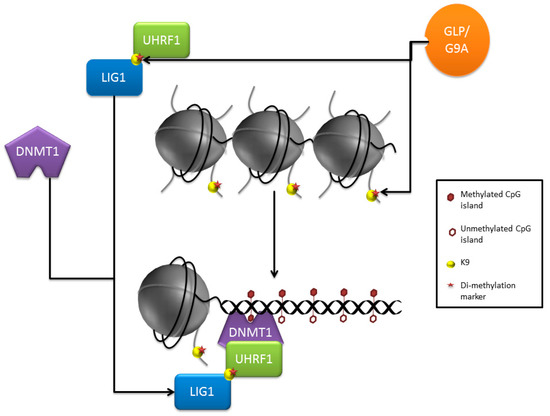