Charge screening and adsorption capacity of monovalent ions onto pyrite (Py) in aqueous suspensions and the effect of potassium amyl xanthate (PAX) has been studied by measuring the changes in zeta potential (zp) versus pH with streaming potential. PAX addition in the absence of salts leads to an increase in |zp| suggesting dissolution of the surface ferric hydroxides and recovery of bare Py, corroborating existing theories. In the presence of salt, addition of PAX at pH > 6, for which hydroxides interference in not expected, has little effect over the zp, except when Li is present. The water network around the polar head of PAX is expected to be similar to that of hydrated Li+ facilitating the linkage between them and, thus, the formation of Li-mediated Py–PAX bridges. We speculate that these bridges lead to a xanthate shield around anionic sites on Py, decreasing |zp|. An increased PAX dose amplifies the effect of Li as a Py activator but only at low salt. At high salt concentrations, >0.01 M, PAX molecules do not find room to percolate to the surface of Py. Results for monovalent cations should improve our understanding of copper flotation processes in the presence of Py in saltwater. View Full-Text
Keywords: pyrite; seawater; PAX; adsorption; zeta potential; viscosity pyrite; seawater; PAX; adsorption; zeta potential; viscosity
►▼ Show Figures 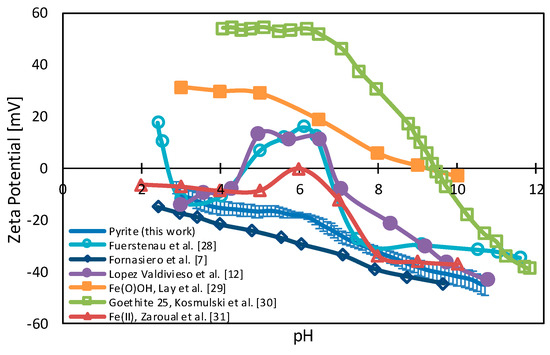