The First Appearance of Symmetry in the Human Lineage: Where Perception Meets Art

Although symmetry may be important for understanding the selection of form in art over the historical period, this preference may have originally stemmed from certain basic perceptual mechanism that initially arose during prehistory. The first signs of an awareness to symmetry can be found in the archaeological record with the arrival of Acheulean handaxes, especially those dating from 500,000 years ago onwards, which are typified by a prodigious bilateral symmetry. As handaxes represent the earliest material record of an interest in symmetry by the human lineage, they provide a privileged means of understanding why this kind of form came to be valued by later human groups, particularly in relation to “art”. Although still controversial, the preference for symmetry at such an early date has been linked to various aspects of perception relating to enduring evolutionary factors. In this regard, it will be demonstrated how the preference for symmetrical Acheulean tools arose out of long standing perceptual correlates relating to ecological factors that predated the arrival of hominins.
Keywords: visual brain; symmetrical tools; evolution; neuropsychology; proto-art visual brain; symmetrical tools; evolution; neuropsychology; proto-art

Symmetry has consistently been identified as important to the appreciation of most forms of visual art, which has been confirmed both by research into the psychology of perception and neuropsychology. This propensity may derive from certain enduring factors associated with the way the visual brain processes information that was mediated by adaptive strategies allowing organisms to survive. The question arises as to exactly when symmetry may have become an attribute that was no longer linked purely to either survival or functional demands. In order to answer this question it is first necessary to understand why symmetry initially became vital to survival, which will form the basis for understanding why such an attribute later became fundamental to both tool-making and creative endeavors.
Acheulean tools, which first began to appear in the archaeological record about 1.6 million years ago following the Oldowan sequence [1], constitute the first instance of imposed symmetry and have been associated with a number of hominin species, some of which were probably ancestral to modern humans. In this respect, the symmetry of Acheulean tools was noted over a hundred years ago and has been the subject of intense research ever since [2,3]. The symmetry of late Acheulean tools from around 500,000 BP (before present) seem, however, to display a greater refinement and sophistication compared to earlier examples [4,5] with the profile of the earlier bifaces being accounted for by purely functional determinants [6]. Interestingly, the larger bifaces seem to reveal a bias toward greater symmetry [7]. It has therefore been suggested that the increased concern for symmetry during the later period can be explained by an intentional concern for symmetry that was detached from the practicalities involved in the shaping process. In which case, this would represent the first occasion when symmetry did not depend solely on the perceptual imperatives of survival or on the practicalities of engaging with materials. As this represents the first evidence of a disinterested concern for symmetry, it provides an important clue as to how symmetry became important to visual culture. Having said this, examples of refined symmetrical handaxes have been found before 500,000 BP but these seem to be a much rarer commodity compared to the later period. Moreover, concern for symmetry seems to center on handaxes rather than other Acheulean tools such as cleavers, which may have initially derived from the constraints associated with sharpening procedures and the particular functional demands associated with handaxes. In what follows, the way in which an interest in symmetry for its own sake first evolved and how this became important to “art” will be addressed.

Rensch [8] demonstrated that monkeys, raccoons, and birds prefer symmetry to asymmetry and irregularity. This may be related to the fact that symmetry is an enduring aspect of the visual world that has been incorporated into the underlying neural capacities of the brain in terms of capturing the non-accidental properties of the world [9,10]. In this respect, symmetry seems to be a property integral to the natural world [11,12] that, for example, helps promote efficient growth in natural occurring organisms, and also provides a means for the visual brain to offset variability [13,14]. Thus, the preferred response of neurons may have originally derived from the fact that many of the objects that need to be detected are themselves symmetrical [14] and thereby serve as an early warning signal that something of interest may need to be attended to. In addition, most biologically important objects are symmetrical [15,16] and, in this regard, sensitivity to symmetry may have evolved because it is crucial for discriminating living organisms from inanimate objects [17]. The existence of fractals in natural scenes also reflects the widespread existence of symmetry in nature [18]. Symmetry therefore appears to provide a useful means by which the visual world can be encoded for the purpose of efficient recognition [19,20].
The importance of symmetry in this context has been confirmed by neuroimaging studies that show how certain areas of the extrastriate cortex are involved in integrating more basic pattern recognition functions deriving from the early visual cortex (V1 and V2) that are assimilated for more extensive processing in extrastriate areas [21,22]; a finding that has received support and was refined by Sasaki et al. [23] where extrastriate areas V3 V3A, V4, V7, as well as LO, were also implicated in the perception of symmetry (with much stronger activation in V4 and LO). In addition, Sasaki et al found differences between monkeys and humans in the way symmetry is processed in that, although corresponding areas were active in monkeys, this was at a much reduced level (see below for more on this). The authors concluded that sensitivity to symmetry must therefore be crucial to survival e.g., for identifying predators or prey and thus provides evidence of an evolutionary continuity between non-human primates and humans [24,25]. The enhanced sensitivity of humans to symmetry thereby seems to indicate that this is essential for extracting the non-accidental properties of the visual array and is a function that is especially prominent with regard to mirror symmetry [26,27].
The perception of symmetry as an early and rapid means of extracting information from the world also appears to occur automatically at a preattentive level and is unaffected by learning [28,29,30], which further underpins its importance; a fact that is reinforced by the finding that sensitivity to symmetry appears in infancy [31] and the bias toward symmetry causes particular kinds of misperceptions that remain unbeknown to perceivers [32]. As the participants in such studies remained unaware of the various effects involved, this reinforces the fact that basic perceptual mechanisms associated with implicit processes influence behaviour. Mirror symmetry, especially along the vertical axis, is also perceived more effortlessly and spontaneously than other kinds of symmetry and does not always involve conscious awareness when compared to symmetries that necessitate rotation and translation [16,33]. Having set out the importance of symmetry for perceiving the world in relation to the visual brain, we now need to consider how such findings can help to explain the symmetry of Acheulean tools.

Tyler [21,22] notes that the artificial environment constructed by humans is full of symmetry that also extends to visual art. As stipulated, the beginning of the tendency towards manipulating the environment in this way seems to have begun with later Acheulean handaxes in the increasing engagement with symmetry as an end in itself. Following the Acheulean period, however, tools became even more sophisticated in that a greater range of tools for specific tasks as well as composite implements began to appear in the archaeological record that eventually led to tools with obvious decorative elements. The makers of later symmetrical Acheulean handaxes, although not fully aware of the significance of symmetry, were at least sufficiently alert to begin to respond to its attributes in a way that did not completely rely on preattentive processes. This indicates that the symmetry of Acheulean tools was first exploited on a purely practical/functional level after which a non-functional interest became apparent that arose out of the demands of the perceptual system as embodied in the early visual cortex. The fact that the first glimmerings of an “aesthetic” concern occurred at least 500,000 BP in a species that was not fully modern (either late Homo erectus or Homo heidelbergensis) suggests that the aesthetic sensibility of modern humans has extremely ancient beginnings. This propensity, however, was based on a predetermined sensory bias that engendered feelings of pleasure [102] that eventually led to what Dissanyake [103,104] has termed “making special” or “artification”, and is a conclusion that supports the long held belief of Oakley [105] and others [106] that some Acheulean tools were concerned with more than just functional considerations.

Acheulean tools represent the first occasion when symmetry became detached from adaptive perceptual constraints or functional determinants. This augmented interest seems to have evolved as a by-product of enduring perceptual mechanisms for the detection of important forms in that such symmetry came to transcend practical concerns. Such interest appears to have derived from an assimilation of the implicit visuo-spatial/motor ventro-dorsal pathway with the more consciously derived ventral pathway for processing visual information. More generally, the increased interconnectedness and density of the neural tracts of the evolving human brain may also have been involved, as this served to improve both the rate and amount of cross-referencing that could take place between various parts of the cortex. The procedure whereby symmetry came to transcend functional constraints can thus be summarized as follows: (1) Positive affect deriving from the incidental production of symmetrical handaxes resulting in perceptual fluency that led to, (2) increased synchronization in neural responses that gave rise to, (3) sensory exploitation of symmetry that engendered, (4) a rudimentary aesthetic sense that was, (5) integrated into social signaling. The very beginning of visual culture, which formed the basis for much later “art”, therefore appears to have deep roots, and began with an interest in symmetry that went beyond mere functional considerations as is testified by the detached concern for the shape of Acheulean handaxes. 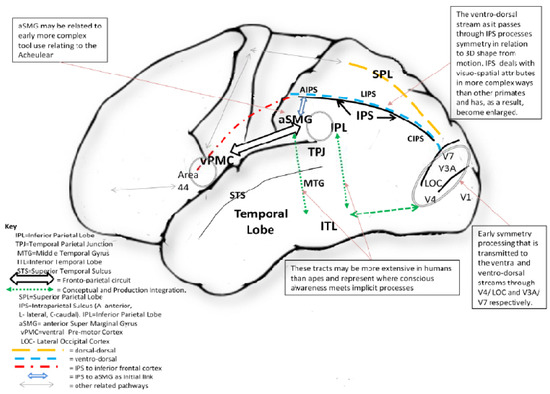 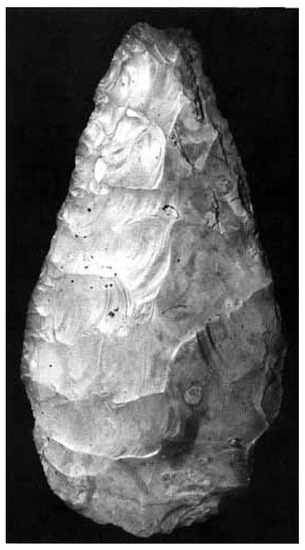 © 2011 by the authors; licensee MDPI, Basel, Switzerland. This article is an open access article distributed under the terms and conditions of the Creative Commons Attribution license (http://creativecommons.org/licenses/by/3.0/).
We use cookies on our website to ensure you get the best experience. Read more about our cookies here.
Accept
We have just recently launched a new version of our website. Help us to further improve by taking part in this short 5 minute survey here. here.
Never show this again