The parsley roots of Berlińska variety were cut into 3, 6 and 9 mm thick slices. The research material was dried in natural convection conditions. The drying air temperatures were the following: 40, 50, 60 and 70 °C.
The detail about the equipment, measurements and their accuracy have been described in [61].

It is assumed very often that the water transfer inside the dried solid is only a diffusion movement in the convection drying of materials with high initial moisture content. Therefore the equation used for the description of the drying process (for an infinite plane (slices)) takes the following form [62,63,64]:
The following simplifications were used in this equation: The volume and shape of the drying sample do not change during drying, D is constant.
Initial and boundary conditions are taken for solving Equation (1) were as follows [62,64]:
An analytical solution of Equation (1) with the initial condition (Equation (2)) and boundary conditions (Equation (3)) in the form of mean moisture content being a function of time can be expressed as [62,64]: where:
A method of solving the diffusion equation for different geometries can be found in the literature [62,64].
The Biot number in Equation (5) and D in Equation (4) were assumed dependent on temperature and characteristic dimension using the formulas:
A similar type of dependents (linear, logarithmic, exponential, rational, square type of equations) were considered in the literature. The authors investigated the effects of the particle shape, particle size, initial material load [65], initial height of the layer, drying air temperature, air velocity [66] and vegetable species [67] on the drying models coefficients and constants.
To compare the fit quality of the model (4) to experimental data, the root mean square error (RMSE), the mean absolute error (MAE) and the coefficient of correlation (R) were taken (the most commonly used [60,67]):

In many applications, the cost function has multiple, oftentimes conflicting, objectives. This will be a multi-objective optimization problem (MOO) problem. In multi-objective optimization, usually, no single solution exists that is optimum with respect to all objectives. Therefore a set of optimal solutions are obtained, often known as Pareto optimal solutions or noninferior solutions, and all these solutions are equally satisfactory.
The aim of multi-objective optimization is finding as many of these solutions as possible. If the reallocation of resources cannot improve one cost without raising another cost, then the solution is Pareto optimal. Pareto solution returns a population with many members on the Pareto front. The population is ordered based on dominance. Solution S1 dominates solution S2 if S1 has a lower cost than S2 for at least one of the objective functions and is not worse with respect to the remaining objective functions.
A noninferior solution is optimal if no other solution dominates that solution with respect to the cost functions. A solution is nondominated if no solution can be found that dominates it. Once this set of solutions is found, then the user can select a single solution based on various post-optimization trade-offs rather than weighing the costs. One way of finding the Pareto front is to run an algorithm for many various combinations of the fitness function weights. Each optimal solution is on the Pareto front. This approach needs too many runs to estimate the Pareto set. The multi-objective genetic algorithm (MOGA) starts by finding all nondominated chromosomes of a population and gives them a rank of one, as reported by Fonesca and Flemming [68].
Deb [69] proposed a new nondominated sorting genetic algorithm (NSGA) that uses several layers for the classification of individuals. Before selection, the population is ordered in terms of dominance. All nondominated individuals fall into one category. An artificial match value is introduced that is proportional to the population size. In this way, individuals are given equal reproductive potential. To maintain population diversity, this artificial fitness function is shared. Then the next group of nondominated individuals is classified. This process is repeated until all individuals in the population have been classified. A full description of the algorithm can be found in the literature [69].
The next NSGA II algorithm improves the NSGA algorithm by reducing the computational difficulty of the nondominated sorting, introducing elitism, replacing sharing with crowded comparison to reduce computations.
Figure 1 shows a flowchart of this Pareto genetic algorithm. This approach allows an easier way to trade off the infinite number of optimal solutions to the MOO problem. The Pareto genetic algorithm introduced here works with two fitness functions. It can be easily modified to work with more. A Pareto solution needs a large population size to work well since it is trying to define the Pareto front. Accordingly, we only include the tournament selection and mutation operator in the genetic algorithm. More details are described in the literature [69].

The optimization problem was divided into two tasks. The first one was the evaluation of the mass diffusion coefficient and Biot number from Equation (4) for each drying temperature: 40, 50, 60 and 70 °C and for each characteristic dimension (slices thickness): 3, 6 and 9 mm. The second optimization task was to determine the constants in Equations (6) and (7).
Both RMSE and MAE were minimized, whereas R was maximized, for the difference between the data and objective function for considered optimized tasks. The algorithm randomly selects a set of models by minimizing the error between the proposed model and experimental data. Next, it evolves them to give the best fit, hence the MOO problem was formulated in the following way:
The optimization task was solved in MATLAB Optimization Toolbox™ using the following options: The “crossover” and “mutation” rates of 0.7 and 0.15, respectively; “ParetoFraction” of 0.5; number of generations of 600 multiplied by number of variables; “Population size” of 50 multiplied by number of variables; and “Tournament” method as selection function [70].

3.2. Optimization of Parameters of the Functions for Determining Bi and D.

The paper used a Pareto optimization method for the evaluation of mass diffusion coefficient and mass Biot number, occurring in the equations, describing the drying process. An NSGA algorithm taking into account simultaneous maximization of R and minimization of RMSE and MAE, between the experimental data and model, was satisfactorily used. The optimum Bi, constants of function for Biot number calculation, D and constants of function for mass diffusion coefficient calculation, gained by the NSGA II algorithm, were established. The square type of function f (T,s) can be applied for evaluation of considered Bi and D. The results of statistical analysis for the Bi and D equations were as follows: R = 0.9906, MAE = 0.0406 and RMSE = 0.0503. The conducted model validation gave good results. 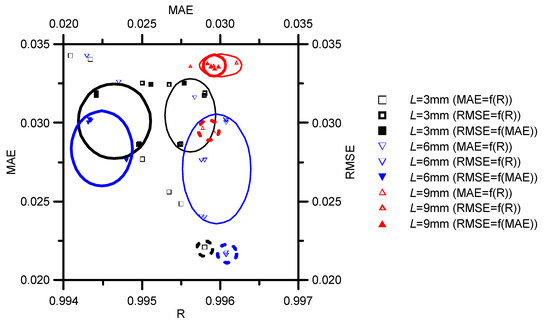 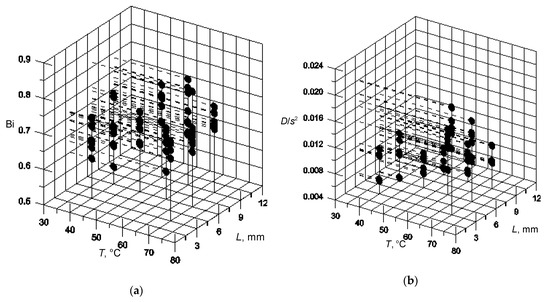 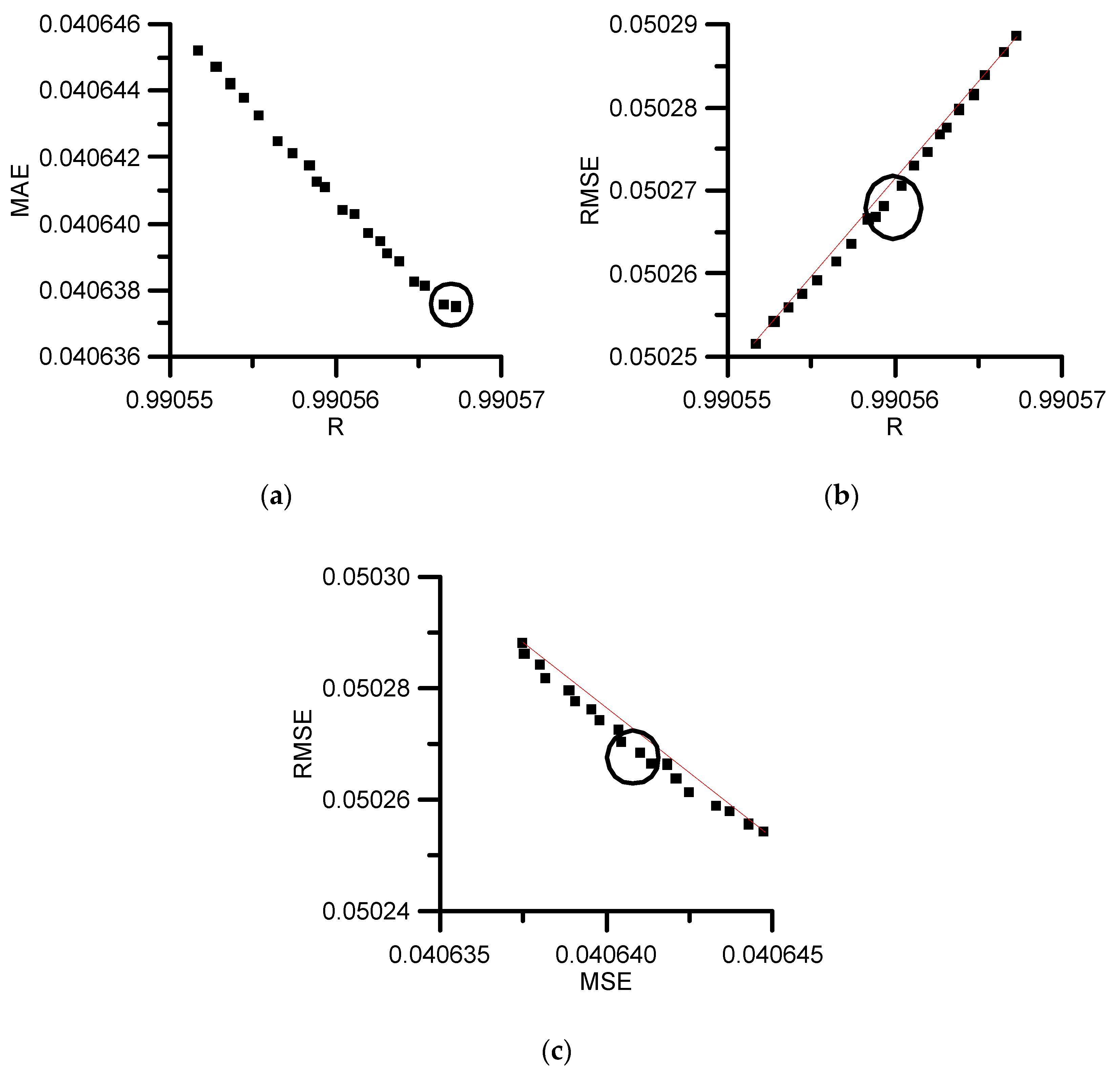