A Participatory Approach for Adapting River Basins to Climate Change

This paper explores numerically the benefits of water discharge prediction in the real time control (RTC) of water distribution networks (WDNs). An algorithm aimed at controlling the settings of control valves and variable speed pumps, as a function of pressure head signals from remote nodes in the network, is used. Two variants of the algorithm are considered, based on the measured water discharge in the device at the current time and on the prediction of this variable at the new time, respectively. As a result of the prediction, carried out using a polynomial with coefficients determined through linear regression, the RTC algorithm attempts to correct the expected deviation of the controlled pressure head from the set point, rather than the currently measured deviation. The applications concerned the numerical simulation of RTC in a WDN, in which the nodal demands are reconstructed stochastically through the bottom-up approach. The results prove that RTC benefits from the implementation of the prediction, in terms of the closeness of the controlled variable to the set point and of total variations of the device setting. The benefits are more evident when the water discharge features contained random fluctuations and large hourly variations. View Full-Text
Keywords: valve; pump; real time control; pressure; water distribution modelling; leakage valve; pump; real time control; pressure; water distribution modelling; leakage
►▼ Show Figures 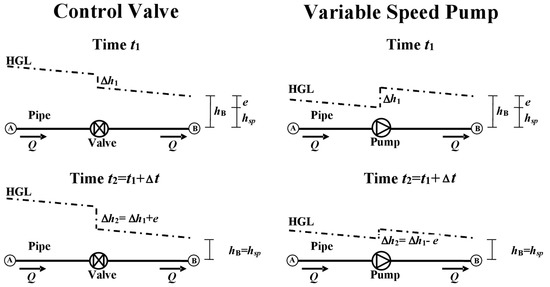