The effects of weirs on fish and other biological communities have garnered considerable study, whereas the effects of weirs on community composition of toxic cyanobacteria have not yet been well documented. In this study, temporal and spatial variations in species composition and the abundance of potentially toxic cyanobacteria were investigated in the riverine regions of the temperate Youngsan River estuary, where two weirs have recently been constructed. Four stations were sampled 0.5 m below the surface monthly along the channel of the upper river from May 2014 to April 2015 to explore cyanobacterial composition and abundance, while physicochemical and biological parameters were measured to elucidate possible mechanisms controlling these dynamics. Two stations were located upstream at free-flowing sites, and the other stations were located downstream at impounded sites near the weirs. Twenty-eight cyanobacterial species were identified, seven of which were potentially toxic: Microcystis sp., M. aeruginosa, M. flos-aquae, Dolichospermum sp., Aphanocapsa sp., Oscillatoria sp. and Phormidium sp. Microcystis sp. was the most abundant in June 2014 at the lowest station near the weir. Meanwhile, Phormidium sp. occurred at low abundance throughout the study period, except during the winter months, when its abundance was elevated. The interactive forward selection method highlighted dissolved inorganic nitrogen and zooplankton abundance as explanatory variables for this observed variation, but their effects on cyanobacterial growth are unclear. However, temperature was the major determinant for the temporal variation in cyanobacterial populations. Cluster analysis showed that the downstream stations near the weirs had a high similarity of potentially toxic cyanobacteria. Significantly higher abundance, especially of Microcystis sp., was also recorded at the impounded sites suggesting that the presence of weirs might affect variations in toxic cyanobacterial communities. View Full-Text
Keywords: toxic cyanobacteria; weir; Microcystis; Phormidium; temperature toxic cyanobacteria; weir; Microcystis; Phormidium; temperature
►▼ Show Figures 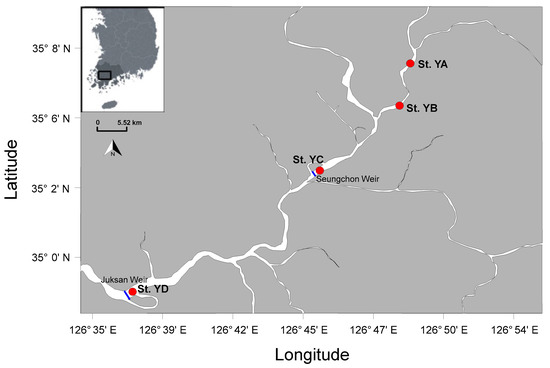