Integrated Geological, Hydrogeological, and Geophysical Investigations of a Barchan Sand Dune in the Eastern Region of Saudi Arabia

Flash floods are one of the most devastating natural hazards; they occur within a catchment (region) where the response time of the drainage basin is short. Identification of probable flash flood locations and development of accurate flash flood susceptibility maps are important for proper flash flood management of a region. With this objective, we proposed and compared several novel hybrid computational approaches of machine learning methods for flash flood susceptibility mapping, namely AdaBoostM1 based Credal Decision Tree (ABM-CDT); Bagging based Credal Decision Tree (Bag-CDT); Dagging based Credal Decision Tree (Dag-CDT); MultiBoostAB based Credal Decision Tree (MBAB-CDT), and single Credal Decision Tree (CDT). These models were applied at a catchment of Markazi state in Iran. About 320 past flash flood events and nine flash flood influencing factors, namely distance from rivers, aspect, elevation, slope, rainfall, distance from faults, soil, land use, and lithology were considered and analyzed for the development of flash flood susceptibility maps. Correlation based feature selection method was used to validate and select the important factors for modeling of flash floods. Based on this feature selection analysis, only eight factors (distance from rivers, aspect, elevation, slope, rainfall, soil, land use, and lithology) were selected for the modeling, where distance to rivers is the most important factor for modeling of flash flood in this area. Performance of the models was validated and compared by using several robust metrics such as statistical measures and Area Under the Receiver Operating Characteristic (AUC) curve. The results of this study suggested that ABM-CDT (AUC = 0.957) has the best predictive capability in terms of accuracy, followed by Dag-CDT (AUC = 0.947), MBAB-CDT (AUC = 0.933), Bag-CDT (AUC = 0.932), and CDT (0.900), respectively. The proposed methods presented in this study would help in the development of accurate flash flood susceptible maps of watershed areas not only in Iran but also other parts of the world. View Full-Text
Keywords: machine learning; flash flood; GIS; Iran; decision trees; ensemble techniques machine learning; flash flood; GIS; Iran; decision trees; ensemble techniques
►▼ Show Figures 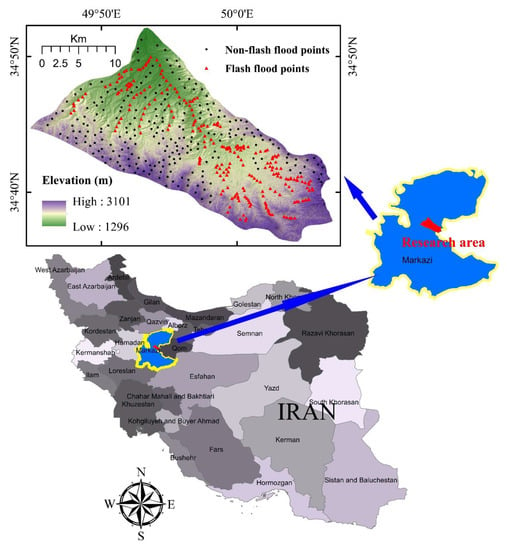