The experimental sites are located in the irrigated areas of the Shihezi reclamation area in Xinjiang Province (Figure 1). The climate of the study area is typical arid [26]. The average annual precipitation and potential evaporation are 148 and 1900 mm respectively. The groundwater depth is 2–4.5 m, and groundwater mineralization is generally greater than 10 g L−1. Extreme weather, scarce rainfall and strong evaporation make an efficient water-saving irrigation technique the only way to sustainably develop the oasis.

The experiment was carried out on four farms, and one newly reclaimed salt wasteland was selected from each of the four farms (the numbers of the farms are F121, F135, F144, and F145; Figure 1) in the experimental area for long-term salt dynamic observation. Each field, with an area of 2000 m2, was newly reclaimed in 2008 using mulched drip irrigation. In 2016, an experimental field that had been under mulched drip irrigation for 8 years was selected from farm F121 to study the distribution of soil water and salt in the transect perpendicular to the drip pipe. The entire field experiment was conducted from 2008 to 2016. The crops planted were medium long-staple cotton (Xinluzao series); the maximum embedded depth of taproot exceeds 1 m, while most roots are mainly distributed in the 0–60 cm soil layer. According to the climatic characteristics, the cotton was usually sown in the middle of April (dry sowing wet germination) and picked in the middle of September after about 150 days. During the intermission, agricultural operations such as tillage, soil loosening, and pesticide spraying were carried out, and cotton topping was conducted in mid-July. The planting mode adopted the ‘one pipe, one film, and four rows’ cotton arrangement method. The inner diameter of drip line is 16 mm, the spacing between drip holes is 300 mm, and the designed emitter flow rate is 2.6 L h−1. The width of plastic film was 110 cm, the row spacing of cotton plants was 20 cm, and cotton plants on both sides were 23 cm away from the drip pipe, as shown in Figure 2.
Irrigation and fertilization systems were in accordance with local production practices: Irrigating water 8–10 times during the growth period with an irrigation quota of 732–789 mm, and the farmland idle without irrigation treatment during the non-growth period. The water source for irrigation comes from the Manasi River and the salinity of the river water is 0.50~0.97 g L−1. According to the growth of cotton, different fertilizers, mainly urea and potassium ammonium phosphate, were used for each irrigation. The annual amount of fertilizer applied was about 1041 and 708 kg ha−1, respectively. Only shallow tillage and land leveling were applied to the cotton field in the non-growth period.

For salt wasteland sampling, three sampling areas were selected for each plot using a diagonal sampling method, and soil samples were collected in and out of the mulch film, respectively, in each sampling area. The sampling depths were 0–10, 10–20, 20–30, 30–40, 40–60, and 60–100 cm. From 2011, Soil samples from each layer were analyzed to determine their texture. The sampling was carried out before irrigation in April (pre-sowing), May (seedling stage), June (bud stage), July (blossoming and boll forming stage), August (boll opening stage), and September (harvest period) in 2008–2016.
To study the distribution of soil water and salinity in the transect perpendicular to the drip pipe, sampling work was arranged at seven different sites (Figure 2) along the direction perpendicular to drip irrigation pipe in F121 on 20 June, 23 June, 30 June, and 8 July 2016. In particular, during this period, a single irrigation was carried out on June 21, and the sampling depth of each sampling point were 0–10, 10–20, 20–30, 30–40, 40–60, and 60–100 cm.
Soil water content was determined using an oven-drying method and was given on a mass basis. After measuring the soil water content, soil salinity was measured using weight method [27]. This method is based on water extract from soil sample. The extract is dried to constant weight. We used 15% H2O2 to remove the organic matter in the residue. What remained were the total water-soluble salts from the soil. Detailed procedures for soil salinity measurements are presented in the reference. The soil salinity and soil water content in this paper are the average value of multiple samples in each soil layer. The soil salinity is expressed by weight (g kg−1) and the soil water content is expressed in percent of weight (%).

3.3. Soil Salinity Distribution along the Vertical Direction in Different Years

The distribution of soil salinity at different depths in 2011–2016 is shown in Figure 5, which also shows the soil texture of each layer. As depicted in Figure 5, the soil salinity of F121 basically decreases with depth in all years except for the relatively high soil salinity in the 60–100 cm layers. According to the soil texture of different soil layers in F121, the soil texture is loam above 30 cm and sandy soil below 30 cm. Compared with loam, sandy soil, with a larger particle size, has stronger permeability, which is more conducive to the movement and diffusion of soil water and salt with the infiltration of irrigation water [31]. Therefore, the soil salinity in the upper loam is higher than that in the bottom sandy soil. Similarly, since the layered soil texture of F135 is very similar to that of F121, the soil salinity of F135 also decreases with an increase of depth. In contrary, the soil salinity of F144 increases with depth as a whole due to the soil texture is loam in the upper part and heavy loam in the bottom part. Notably, the soil salinity of F144 accumulates in the soil layer transiting from loam to heavy loam. Also, the soil texture of F145 is loam in the upper part and clay in the lower part, and the soil salt accumulates in the soil layer transiting from loam to clay. Based on the soil texture, there is a common feature of soil salinity distribution in the vertical direction, that is, soil salt accumulates near the soil layer transiting from coarse soil to fine soil.
The permeability of the fine soil particle layer is poor, restricting the infiltration of irrigation water. Moreover, the fine-grained soil layer prevents the salt in the groundwater from migrating to the shallow coarse soil layer, thus alleviating the salinization of shallow soil caused by groundwater evaporation, especially in the region with shallow groundwater level [25,32]. In addition, compared with phreatic evaporation, downward infiltration of irrigation water is dominant under mulched drip irrigation. Therefore, soil salt will accumulate near the fine soil layer due to the relatively higher permeability of coarse soil than fine soil. However, for the soil layer with fine particles in the upper part and coarse particles in the bottom part, the leaching effect of irrigation water in the upper soil layer is poor, so soil salt will accumulate in the upper part, while the soil permeability in the bottom part is good, and it is easy for soil salt to be leached to the deep layer. Generally, the poor soil water and salt movement caused by uneven vertical distribution of soil texture leads to soil salt accumulation. Zhang et al. also found that soil salt would accumulate above the relatively impermeable layer [25]. Therefore, soil texture has a great influence on the distribution of soil salinity. Deep tillage can improve water infiltration, facilitate soil water storage and water retention [33,34,35], reduce soil bulk density and promote salt migration to deep layer, especially for continuous cropping farmlands [35]. Therefore, deep tillage of the farmland should be adopted regularly to alleviate salt accumulation in the root zone.

3.4.1. Soil Water Distribution in the Soil Profile Perpendicular to the Drip Line

3.4.2. Soil Salinity Distribution in the Soil Profile Perpendicular to the Drip Line

In this study, the soil salinity of newly reclaimed salt wasteland was monitored from 2008–2016 based on field experiments. Besides that, the distribution of soil salinity and water in the transect perpendicular to the drip pipe before and after a single drip irrigation was also investigated from 20 June 2016 to 8 July 2016. From the results obtained in this work, the following can be concluded that:
Under long-term mulched drip irrigation, the soil salinity in 0–30 cm and 0–60 cm layers showed a sharp decline in the first 3 to 4 years and then began to fluctuate and showed an upward trend. During the growth period, soil salinity was generally higher at pre-sowing and late harvest period, and decreased immediately after drip irrigation. Soil texture and soil water seriously affect the dynamics and distribution of soil salinity. Soil salt will accumulate in the soil layer transiting from coarse to fine soil from top to bottom. After a single irrigation, soil salt will migrate first downward and then upward with the change of soil water. Therefore, corresponding measures such as flood irrigation, deep tillage, optimization of irrigation regime, and salt exclusion hydraulic measures should be applied to alleviate soil resalination and promote the development of agriculture under long-term mulched drip irrigation. The quantitative study on the effects of these measures on soil desalination under long-term mulched drip irrigation will be the topics in our future research.

The authors would like to thank all members at Paotai Soil Improvement Test Station for monitoring and providing places and facilities in the experiments, and thank Proof-Reading-Service.com for language help. 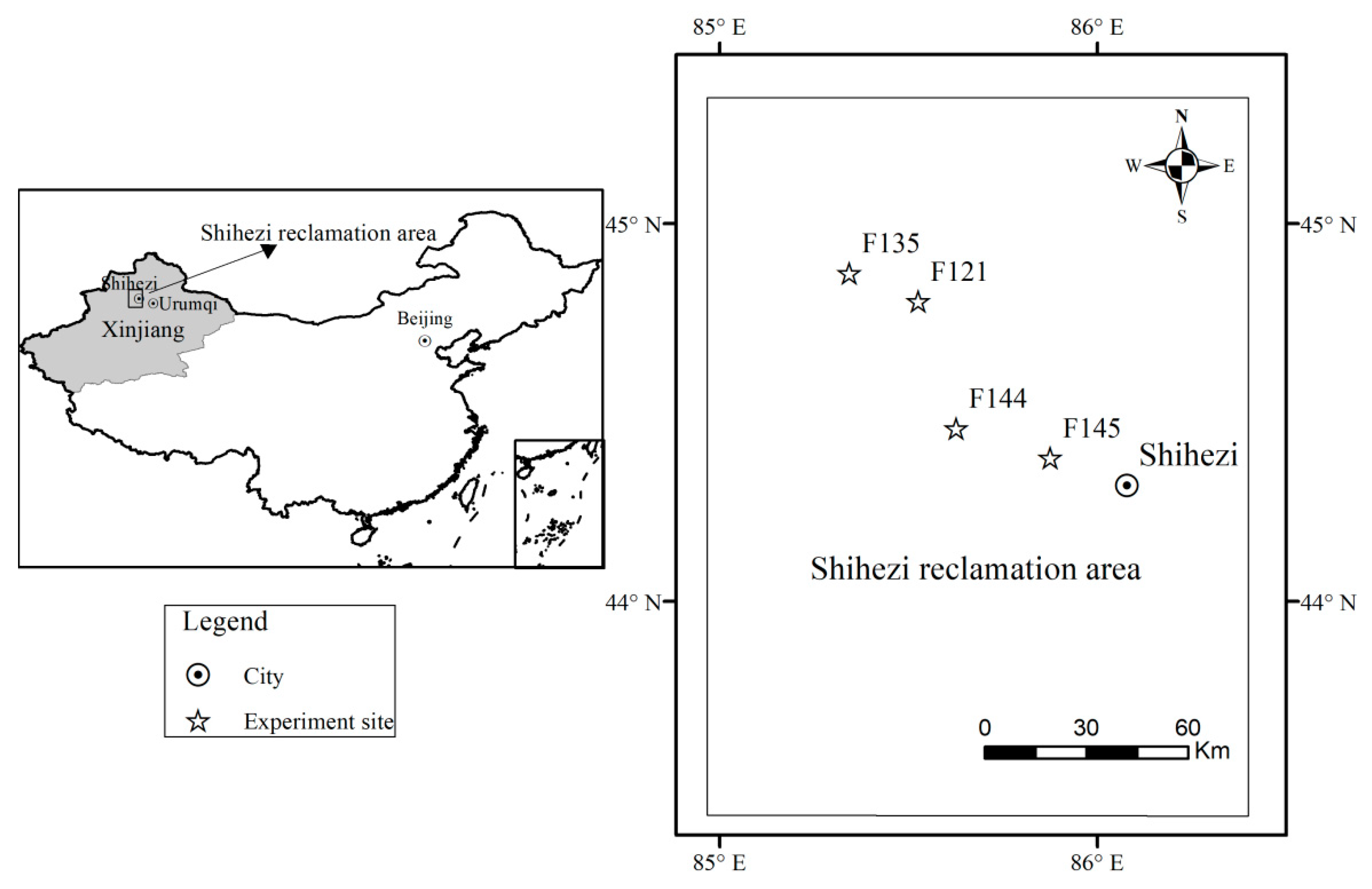 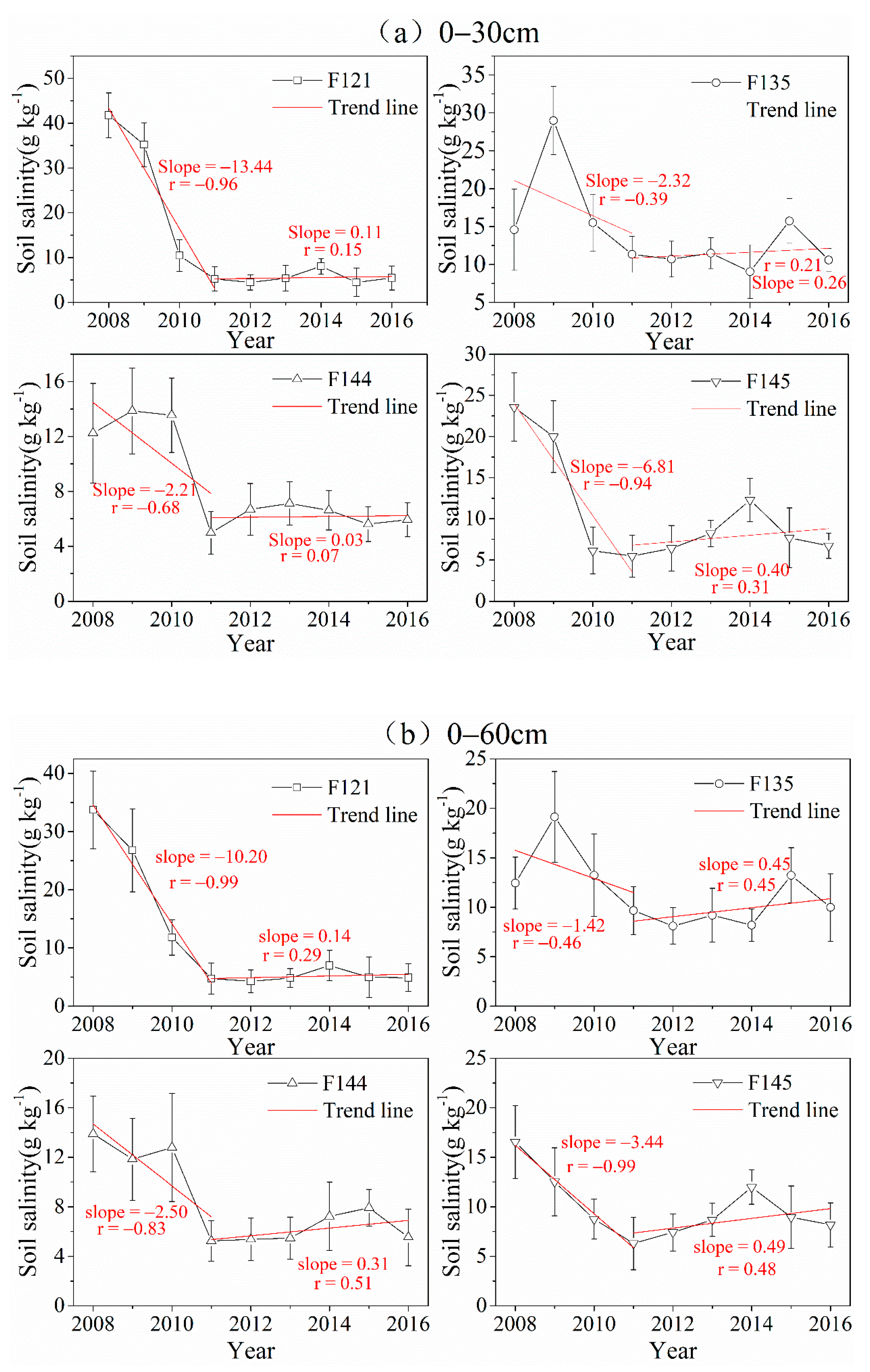 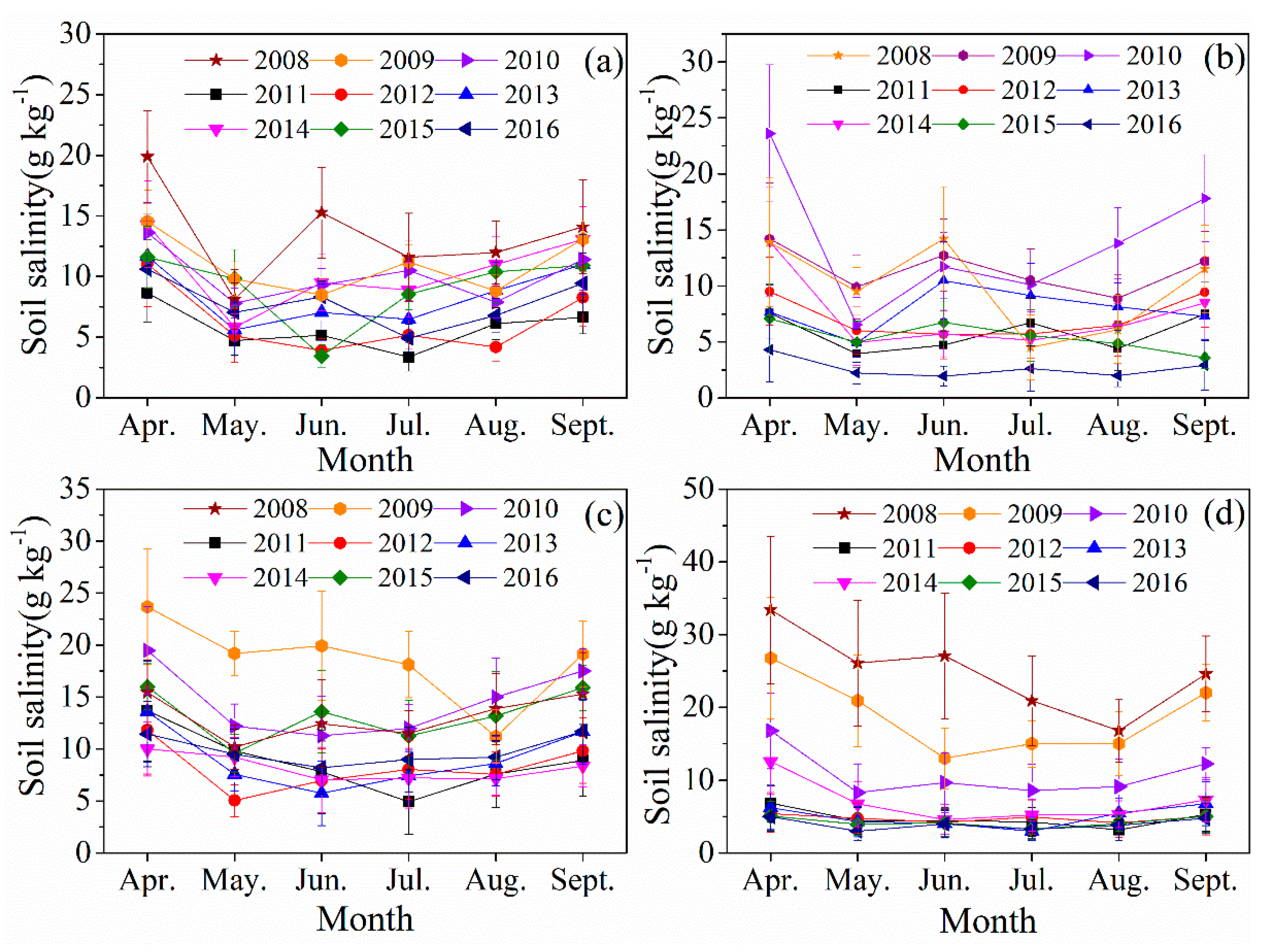 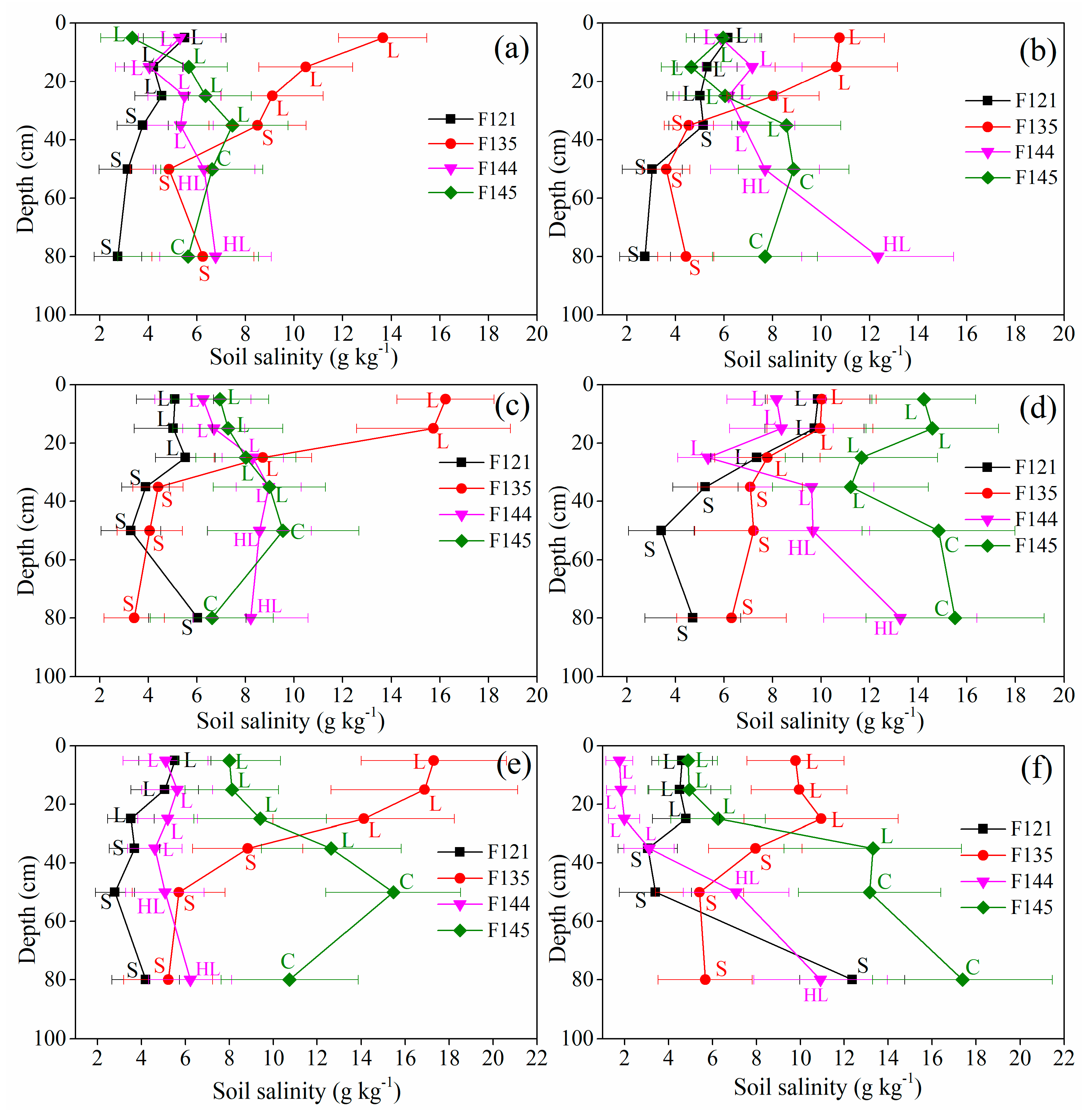 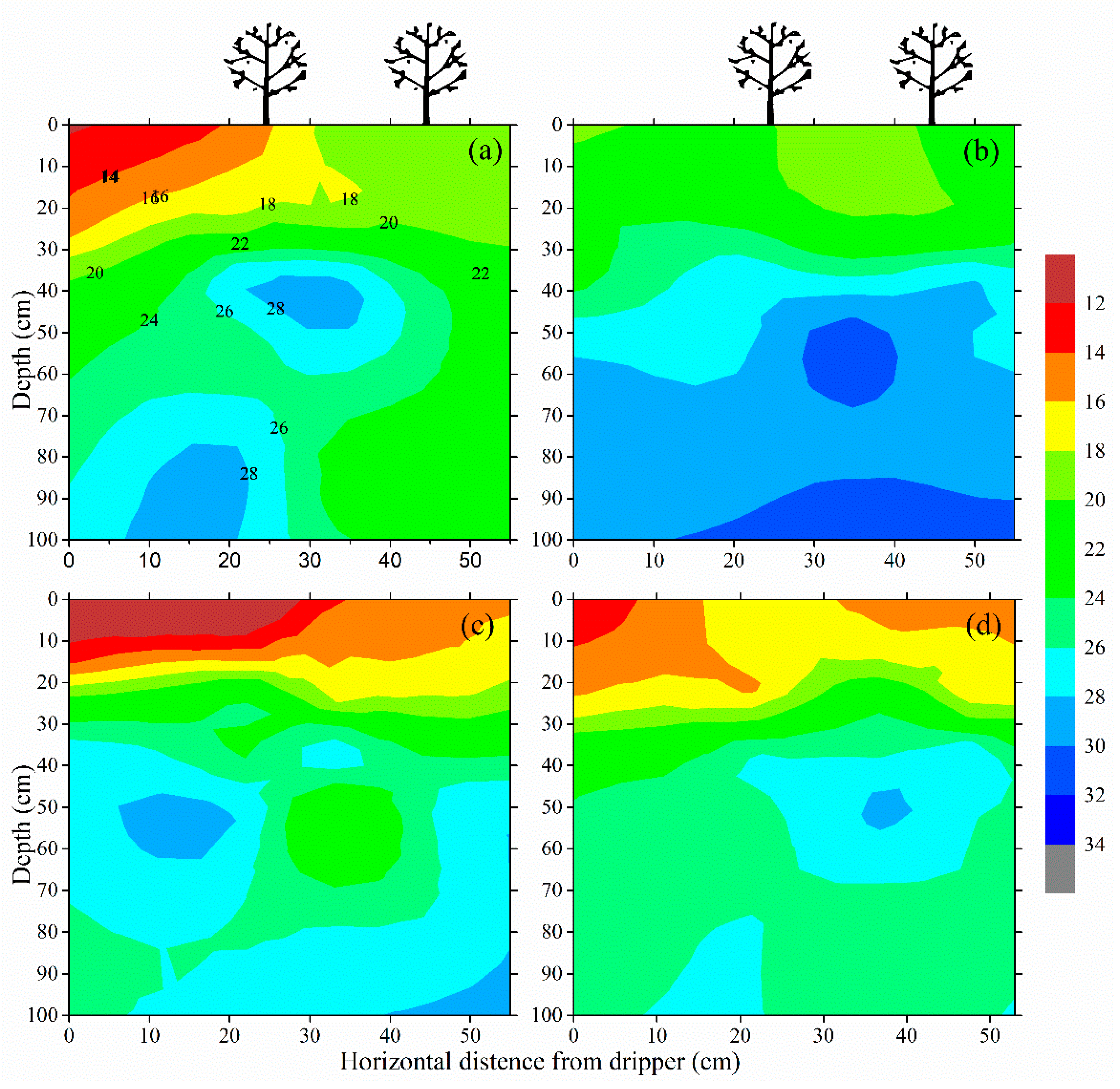