Quantifying the Effects of Climate and Vegetation on Soil Moisture in an Arid Area, China

Xinjiang, located in the Eurasian hinterland, comprises an area of 1.66 million km2 extending between 34°15′ N and 49°10′ N, 73°20′ E and 96°25′ E (Figure 1). It is the core area of the Silk Road Economic Belt and the ecological environment has attracted wide attention.
There are two main basins (the Tarim and Junggar basins) lying between three high mountain ranges stretching across the northern (Altay Mountains), middle (Tianshan Mountains), and southern (Kunlun Mountains) parts of the study area. This typical mountain-basin system creates contrasting environments, including high mountain forest, middle mountain forest-grassland, low mountain desert, agricultural oasis, and natural shrub-grassland [23].
Xinjiang is far from oceans and is surrounded by high mountain ranges, which leads to an arid climate [24]. The average annual precipitation for the entire study area is about 150 mm and the spatial distribution is uneven with high precipitation in mountain areas and low in the plains. Xinjiang has a typical continental climate with four distinct seasons, while the mean annual temperature ranges between 2.5 and 10 °C.

The daily precipitation and temperature gridded datasets (V2.0) at a spatial resolution of 0.5 degrees were released by the National Meteorological Information Center of the China Meteorological Administration (http://cdc.cma.gov.cn). These datasets were generated by spatially interpolating observations from 2472 weather stations in China based on thin plate spline (TPS) method. The National Meteorological Information Centre (NMIC) has conducted cross-validation and error analysis, concluding that these datasets were highly correlated with original observational series and the mean levels of monthly RMSE (root-mean-square error) were 0.49 mm and 0.25 °C for precipitation and temperature, respectively [32,33]. Previous studies also demonstrated that these datasets were able to characterize precipitation and temperature variability in Xinjiang [34,35]. The datasets cover the period from 1960 to the present day, as such we focused on the period between 1982 and 2015 in this study. To match with the MERRA-Land soil moisture data, the data was subsequently converted to monthly temporal resolution and 0.5° by 0.667° latitude-longitude spatial resolution.
In addition, three precipitation extreme indices and five temperature extreme indices, as described in Table 1, were used as predictive variables. These extreme indices were calculated using the daily precipitation and temperature data based on the information provided by Expert Team on Climate Change Detection and Indices (ETCCDI) [36].

NDVI is a radiometric measure of the amount of photosynthetically active radiation absorbed by chlorophyll in green leaves, which can be used as a proxy for vegetation development and land use change [37,38]. Here we used the GIMMS NDVI3g dataset generated from the Advanced Very High Resolution Radiometers sensors by the Global Inventory Modeling and Mapping Studies group (GIMMS) [39]. GIMMS NDVI3g dataset is generally considered as a more accurate dataset for analyzing long-term trends than other products [39,40], and the dataset used here ranges from July 1981 to December 2015 with a 15 days temporal and 0.0833° spatial resolution. Here the monthly NDVI data was obtained with the maximum value composite method [41] and the monthly data was subsequently aggregated to 0.5° by 0.667° latitude-longitude spatial resolution.

Granger causality was proposed by Granger [42] and first used in econometrics to identify causation between variables based on the theory of predictability. In recent years, this method has been extended to the climate system [43,44]. The Granger-causal inference is that variable X causes variable Y if the predictability of Y improves when X is taken into account. The Granger-causal method is suited for stationary and linear systems.
In the Granger causality theory, the coefficient of determination R2 is introduced as a performance measure to evaluate the forecast. R2 can be interpreted as the fraction of explained variance by the forecasting model, and can be expressed as follows [18]: where represents the observed data; is the predicted data; refers to the mean of ; and is the length of the lag-time moving window.
In the Granger causality, the linear vector autoregressive model is used to make forecasts. X causes Y if R2 of a linear model where only the information of Y is taken into account to predict Y is lower than that of a linear model where X is added as a predictor to predict Y. The difference between R2 of these two models can be interpreted as the effect of X on Y.
As the relationships between soil moisture and its influencing factors are highly nonlinear, the nonlinear Granger-causality framework was suggested. Papagiannopoulou et al. [18,45] proposed a nonlinear Granger-causality framework, in which the traditional linear model is replaced with the random forest model to enable it for non-linear relationships. The random forest regression algorithm is an ensemble-based machine learning algorithm that combines a large set of regression trees [46]. Each tree contributes a single vote to the final output, and the predicted value is calculated by averaging over all the trees. There are two main parameters in the random forest algorithm; the number of regression trees (ntree) and the number of predictor variables per node (mtry). In this study, the values of ntree and mtry were set as 500 and 1/3 of the total number of variables. Furthermore, 5-fold cross-validation was applied to assess model performance. The random forest algorithm was implemented based on the free “randomForest” package [47] in R language environment [48] at each pixel of the study area.
In this study, soil moisture was considered as the response variable, while precipitation, temperature, extreme indices, NDVI, and lagged variables (with monthly lags up to six months) served as predictor variables. Taking the variable precipitation as an example, the explained variance (R2) of soil moisture anomaly by precipitation was calculated by: (1) applying the random forest algorithm to predict soil moisture based on all variables except for precipitation; (2) applying the random forest algorithm to predict soil moisture with all variables as predictors (referred to as the full random forest model hereafter); and (3) calculating the improvement in terms of R2 after including the precipitation.
In addition, as the Granger causality is only for stationary time series, we eliminated the linear trend and seasonal cycle from the raw time series and Granger causality was applied on anomaly time series of datasets. For example, variable Y can be detrended based on a simple linear regression with the time as a predictor. The regression equation can be denoted as follows: where a and b are the slope and intercept, respectively; refers to the predicted time series; is the raw time series; and represents the detrended time series.
The seasonal cycle can be simply estimated as the multi-year average for each month, and then the anomaly can be calculated as follows:

The in situ soil moisture data from two agriculture stations (i.e., Shache and Wulawusu) (shown in Figure 1) were used to validate the MERRA-Land data. Due to the different units of in situ (weight percentage) and MERRA-Land (volumetric percentage) data, we compared the variations of these two datasets instead of their magnitudes. Figure 2 shows that MERRA-Land data could capture the main fluctuations of the in situ data from both stations at a monthly scale, with correlation coefficients between in situ and MERRA-Land data of 0.54 and 0.49 for Shache station and Wulawusu station, respectively. According to previous studies, the accuracy is reasonable for soil moisture validation [10,22].

Figure 3a shows the spatial distribution of mean annual soil moisture, which ranged from 0.02 to 0.33 m3·m−3. The minimum soil moisture appeared in the centers of the Tarim and Junggar basin, while the maximum appeared between these two basins. In addition, soil moisture generally increased with elevation. The spatial pattern of soil moisture linear trend from 1982 to 2015 was presented in Figure 3b. Only 27% of the study area was significant at p < 0.05, of which 76% showed an increasing trend. The spatially averaged rate was about 0.0002 m3·m−3/year. Inter-annual change of spatially averaged soil moisture (Figure 3c) was not obvious during 1982–1997 and 2005–2015, while it experienced a sharp increase from 1997 to 2005.
In Figure 3d, the mean annual precipitation ranged from 10 to 800 mm and its spatially averaged value was 151 mm. Taking the Tianshan mountains as a middle boundary, precipitation in the south part was lower than in the north part. Mountains with high orographic precipitation were wetter than basins [24]. Figure 3e presents the spatial distribution of annual precipitation trend. The spatially averaged change rate was about 0.87 mm/year. About 85% of the study area showed an increasing trend, while only 15% showed a slightly downward trend, mainly in the Junggar basin. About 20% of the study area, which was mainly distributed in high altitude areas, showed a significantly increasing trend at the 95% confidence level. The spatially averaged precipitation increased steadily from 1982 to 2015 (Figure 3f).
Annual temperature ranged from −12 to 15 °C with low values in high altitude areas and high values in low altitude areas (Figure 3g). The temperature in the Tarim basin was much higher than in other regions. In addition, most regions (about 87%) showed significantly increasing trends at the 95% confidence level (Figure 3h). Only the northern mountainous areas and a patch in the center of the Tarim basin showed a decreasing trend which was not significant. As shown in Figure 3i, there were some differences in the inter-annual change of spatially averaged temperature for the two periods (i.e., 1982–2004 and 2004–2015). Temperature showed an increasing trend from 1982 to 2004, while a slightly downward trend from 2004 to 2015.
The spatial distribution of NDVI was described in Figure 3j, ranging between 0.02 and 0.4 in the study area. NDVI was less than 0.3 in about 96% of the study area, while some pixels in Tianshan Mountains and Altay Mountains displayed more than 0.3, which reveals that vegetation was relatively sparse in the study area. Most regions of the Tarim Basin maintained low vegetation with a NDVI around 0.1. In Xinjiang, vegetation was mainly distributed in the mountainous areas and oases [17]. As shown in Figure 3k, there were about 66% pixels showing an increasing trend, of which 58% reached 95% confidence level. The degenerating vegetation area only covered about 34%, and mainly appeared in the Junggar basin. The spatially averaged NDVI presented in two-stage changes (Figure 3l). It showed an increasing trend from 1982 to 1997 and then reversed to decrease from 1997 to 2015.

4.3. Effects of Precipitation, Temperature, and Vegetation on Soil Moisture

4.3.1. Spatial Patterns of the Effects

4.4. Influential Factors for the Effects of Precipitation, Temperature, and Vegetation on Soil Moisture

In this study, we analyzed the variations of soil moisture and its influencing factors in Xinjiang during 1982–2015, and then quantified the effects of these factors on soil moisture by applying a non-linear Granger-causality framework driven by reanalysis data of soil moisture, precipitation, temperature, and NDVI. The conclusions can be drawn as follows:

Y.W. analyzed the data and wrote the first draft. J.Y. proposed the main structure of this study. Y.C., P.D.M, G.F., and W.D. provided useful advice and revised the manuscript. Y.L. processed the in situ wind speed data. All authors contributed to the final manuscript. 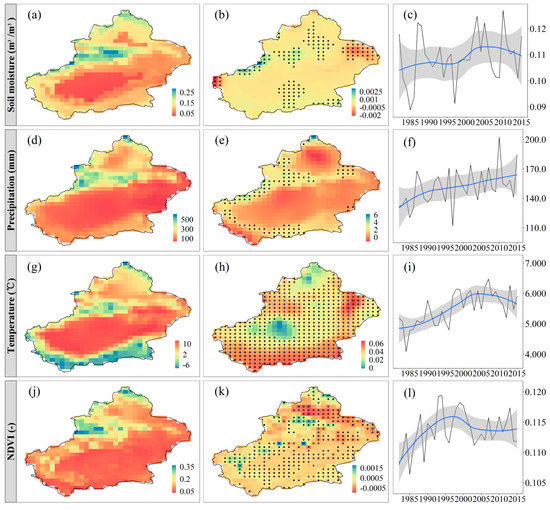 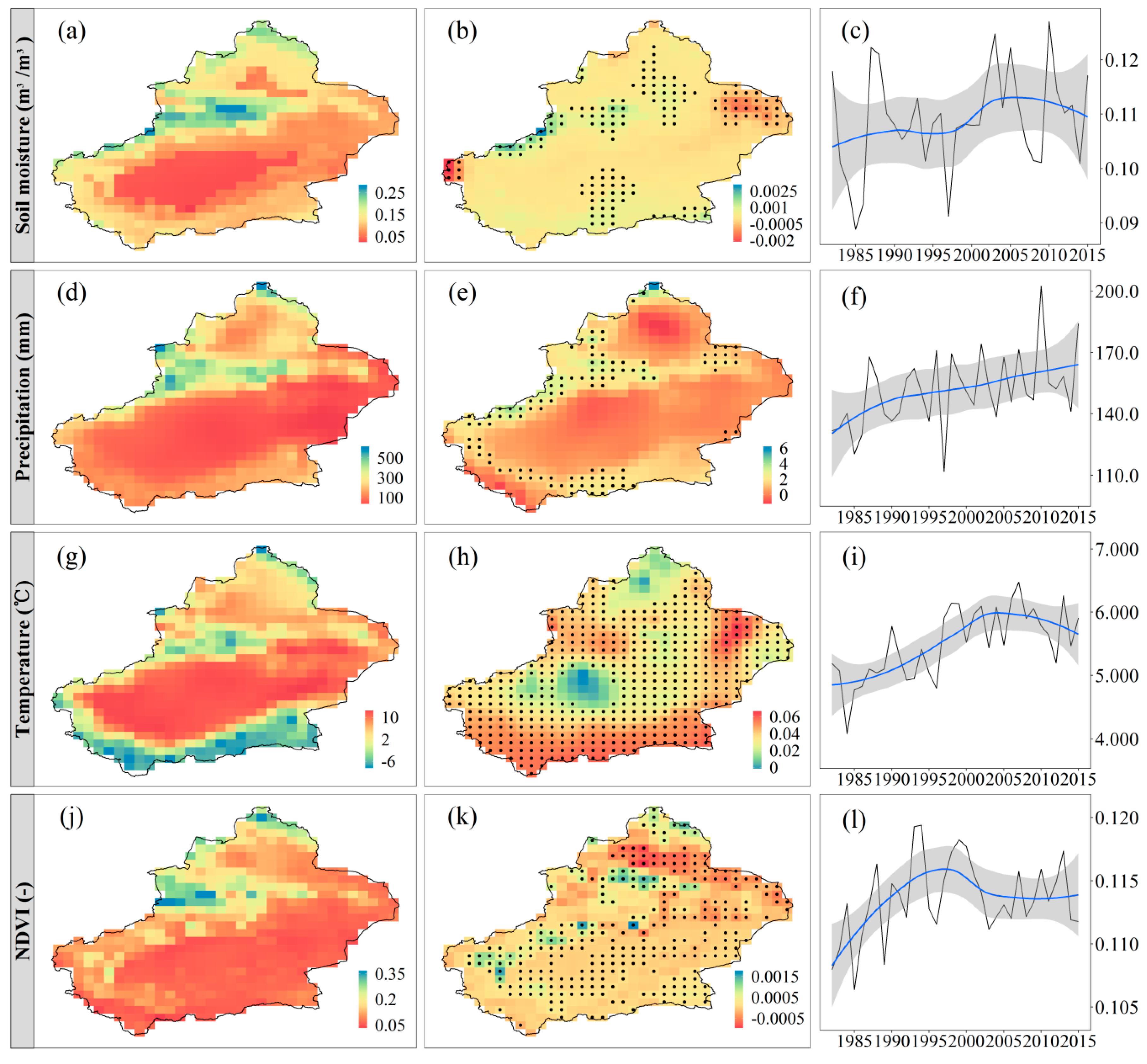 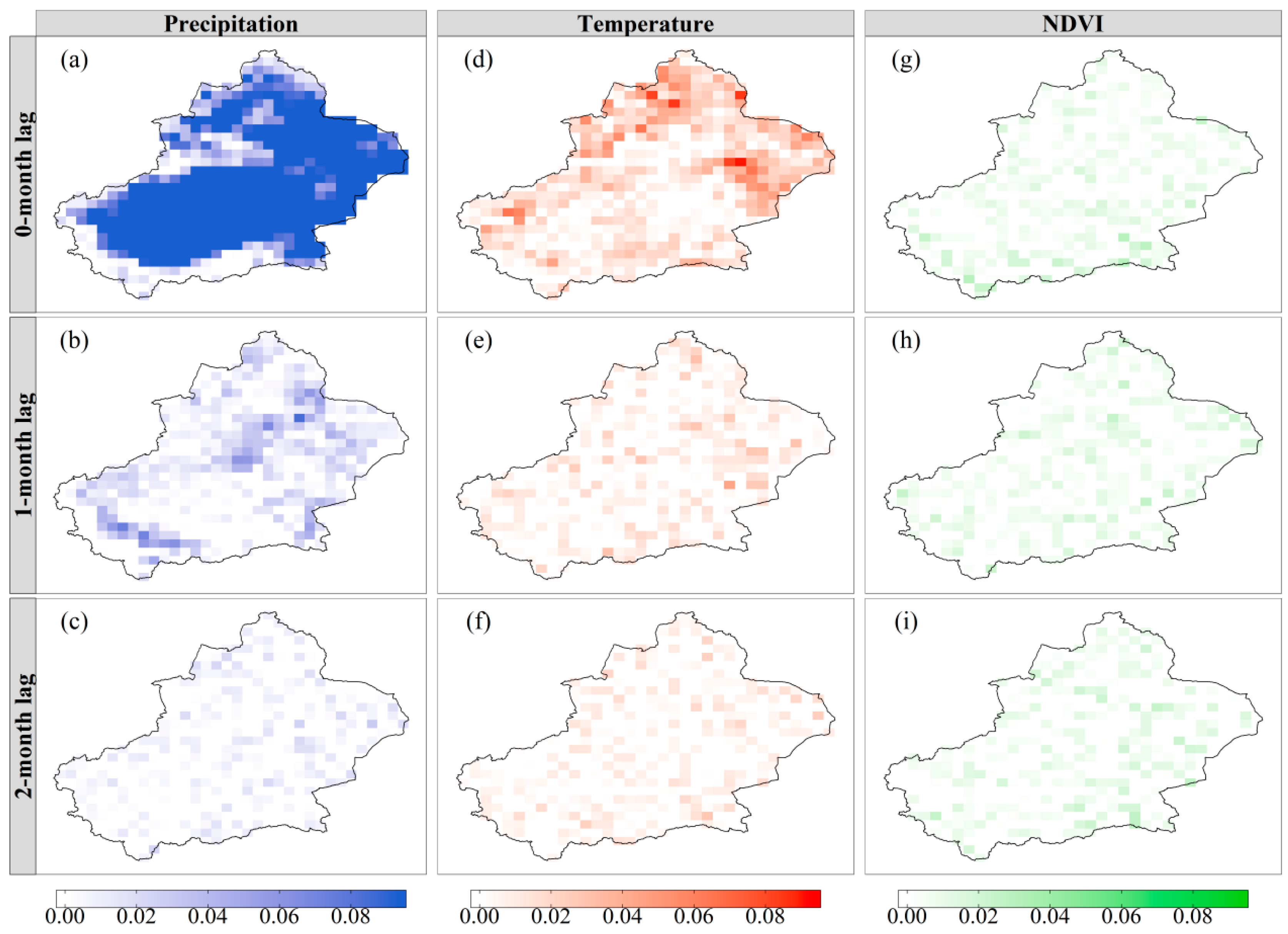 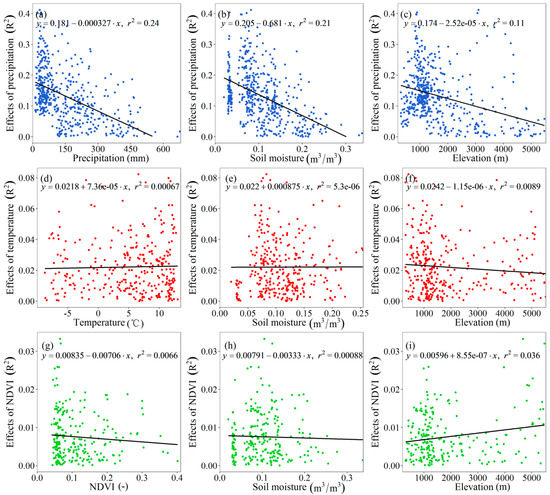 Table 1. Extreme indices considered as predictive variables.
Table 1. Extreme indices considered as predictive variables.
© 2019 by the authors. Licensee MDPI, Basel, Switzerland. This article is an open access article distributed under the terms and conditions of the Creative Commons Attribution (CC BY) license (http://creativecommons.org/licenses/by/4.0/).
We use cookies on our website to ensure you get the best experience. Read more about our cookies here.
Accept
We have just recently launched a new version of our website. Help us to further improve by taking part in this short 5 minute survey here. here.
Never show this again